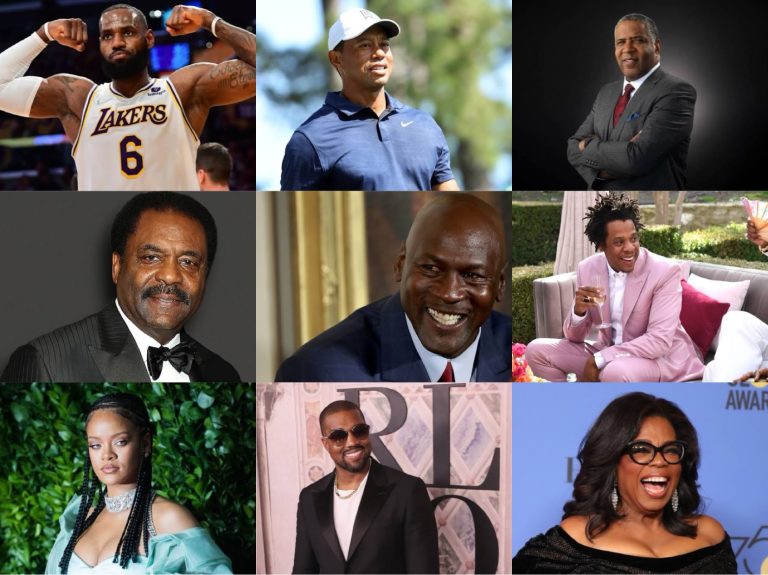 Very recently, Tiger woods and Lebron James, two of the many legendary black athletes in America, joined the exclusive list of Black Billionaires, thereby increasing the number of the already existing black billionaires.

Although most of the Black income billionaire distribution ladder is occupied by only a handful of people, who are mostly  successful athletes, entertainers and entrepreneurs, these black billionaires have been increasingly active in using their wealth in a variety of ways to uplift their communities and promote equity in the country.

Here’s how these 10 Black billionaires have given back to their communities.

One of the key black billionaires that gave back to the black community is Rapper and Mogul Jay-Z.  The rapper  has been using his wealth and celebrity status to support a variety of causes and political agendas over the last few years. He has not only advocated personally to free artists like Meek Mill and 21 Savage from incarceration, but has also helped build a coalition of powerful figures into his REFORM Alliance to promote major changes to the prison and criminal justice systems.

Jay-Z has additionally been just as active through his Roc Nation entertainment company, which will be hosting its first social justice summit in New York City July 2022. Plus, many millions of dollars that he and wife Beyoncé have donated to Black Lives Matter protestors in Baltimore to setting up a trust fund for the children of Sean Bell.

Lebron James may have just hit billionaire status in June 2022, but he has however spent years using his money and celebrity status  to support a variety of noble causes. Through the LeBron James Foundation, King James created and also runs the I Promise School, where he educates hundreds of students in his hometown of Akron, Ohio.

Outside of Akron, Ohio, James has also heavily invested in political influence. Building upon his vocal statements surrounding the deaths of George Floyd and Breonna Taylor, Lebron James as one of the black billionaires that gave back to black community, founded the More Than a Vote organization, which has mobilized athletes, entertainers and political figures and supported everything from voter education to sponsoring thousands of poll workers.

In recent years, Lebron King James has been named the Associated Press’ “Athlete of the Year” (alongside tennis star Naomi Osaka) and awarded the NAACP‘s President’s Award for his activism and community work.

Tiger Woods, the one of latest Black athletes to reach billionaire status, and although is not known publicly for his activism, is also one of the Black Billionaires that gave back to the Black community.

Mr Woods has sometimes been chided for conservative-leaning politics, thereby ignoring the work that Woods has been doing for decades through his TGR Foundation, which he founded in 1996 with his father Earl. The TGR foundation program provides opportunities for at-risk youth, including offering STEM opportunities, college readiness programs, and mentorship and training opportunities through the Earl Woods Scholars program. By the time the foundation celebrated its 25th anniversary in 2021, more than 2 million students had taken part in its services.

Despite his controversial nature, Kanye West has been using his money for several worthy causes. He is one of Black Billionaires that gave back to the Black community.

Ye regularly supports his hometown of Chicago with his status. Just like his contribution of 4,000 gifts during a recent toy drive in the city. And during the summer of 2020, he also contributed to the resurgent Black Lives Matter movement in a major way, providing $2 million to benefit Black-owned businesses and the families of George Floyd, Ahmaud Arbery and Breonna Taylor.

Entertainment mogul, Tyler Perry has built a media empire, supporting hundreds of Black people in front of and behind the camera and amassing a billion-dollar fortune in the process. He is one of the black billionaires that gave back to the black community with this success.

Tyler Perry has been eager to give back in ways both large and small, and in 2009, he made the single largest individual donation ever to the NAACP when he gifted $1 million to the organization. Also, after Rayshard Brooks was killed by police in 2020, Perry paid for his funeral expenses and additionally set up college funds for Brooks’ children.

Furthermore, Tyler Perry has contributed to disaster relief efforts in Haiti, Texas, and Puerto Rico. He once paid for the groceries of shoppers at dozens of grocery stores in New Orleans and Atlanta, and on another occasion covered the layaway amounts for 15 people at two Atlanta Walmart locations just before Christmas.

Although Billionaire investor Robert Smith might not be a household name for most Americans, but if you have attended an HBCU recently, you  may have been impacted by his work. Smith made national headlines in 2019— and changed the lives of hundreds of student, when he gave the commencement speech at Morehouse and announced that he was paying off student debts for the entire graduating class.

Also in 2021, Smith created the Student Freedom Initiative to support students at HBCUs. The program is also currently working with nearly 30 schools and has teamed up with partners like the Steve and Marjorie Harvey Foundation to further conduct outreach to Black students. Robert Smith is notably one of the Black Billionaires that gave back to the Black community.

Oprah Winfrey became the first Black American woman to reach billionaire status in 2003, and since then she has remained one of the black billionaires that gave back to the black community.

Oprah has been making a major impacts for a long time. She founded the Oprah Winfrey Scholars Program at Morehouse College back in 1989 and has also donated $25 million to the school through this endeavor.

One of her most famous philanthropic endeavors has been the Oprah Winfrey Leadership Academy for Girls, which she opened in South Africa in 2007.

As a testament to the impact and longevity of the school, one of its first graduates recently earned a Ph.D. Also,  between 1998 and 2010, the Oprah Angels Network raised more than $80 million on behalf of charities in the U.S. and internationally. These and other endeavors add up to hundreds of millions of dollars that Oprah Winfrey has donated to education and other causes around the world.

Although Riri is a citizen and officially recognized as a national hero of Barbados, Singer and Fashion mogul Robyn Rihanna Fenty primarily resides in the U.S., where she amassed her $1.7 billion wealth through her music career and her Fenty cosmetics and fashion lines.

But Rihanna has not let go of her international roots and through her Clara Lionel Foundation, Rihanna has contributed millions to disaster relief, education and other causes in the U.S. and a number of countries in Africa and the Caribbean.

Recently, the Clara Lionel foundation contributed $15 million to promote climate justice, splitting the money between organizations in the U.S. and a number of Caribbean countries. Rihanna also founded the Diamond Ball in 2014 to bring donations and attention to important world causes. Her work has gained her various accolades and in 2017, Harvard University named her its Humanitarian of the Year.  She is one of the Black Billionaires that gave back to the Black community.

Like  Robert Smith, David Steward made his money out of entertainment or the spotlight. This tech entrepreneur is worth several billion dollars thanks to the IT firm he founded, World Wide Technology, which provides services to companies like Citi and Verizon as well as the U.S. federal government.

David Steward and his wife Thelma, inspired by their Christian faith and the examples set by their parents, created the Steward Family Foundation to conduct charitable work, largely in the areas of arts and education. As one of the black  billionaires that gave back to the black community, his foundation most notably donated more than $1 million to the University of Missouri-St. Louis to found the David and Thelma Steward Institute for Jazz Studies.

While cementing his legacy as one of the greatest athletes of all time, Michael Jordan has also long given large sums of money to various causes, including donating his entire 2001-2002 salary to 9/11 charities; becoming a Founding Donor for the Smithsonian’s National Museum of African American History and Culture and giving millions to tackle police shootings.

However, the global icon took things to another level after George Floyd’s 2020 murder.

Jordan and the Jordan Brand pledged a massive $100 million to be distributed over 10 years to directly impact the fight against systematic racism. Among the organizations and causes that have already benefited from this pledge are the NAACP Legal Defense and Educational Fund; the Formerly Incarcerated, Convicted Peoples and Families Movement; and Black Voters Matter. Morehouse College’s journalism and sports-studies programs also received a $1 million donation, as did a group of 18 grassroots nonprofits fighting racism in various cities around the country. And this is all on top of the millions that Jordan has separately donated to support food banks and build clinics in the Carolinas and Chicago, the places where he built his legendary basketball career.

As more Black entrepreneurs, athletes and entertainers join the Black billionaires’ club, in future, we hope that they will use their wealth, status and power in the socially-responsible ways that these ten individuals have employed their assets and their influence and even do much more better and create greater impacts.