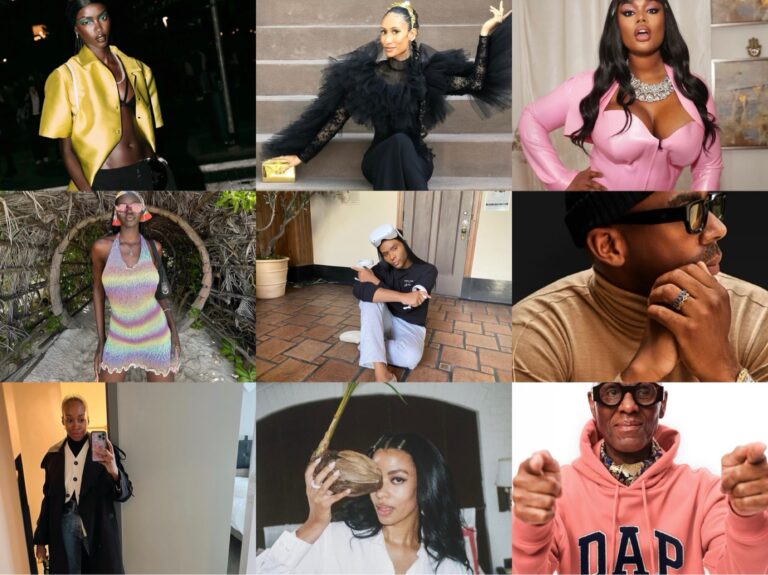 It is impossible to overstate the influence of Black history, culture, and creatives on modern fashion. Black people have shaped fashion and will continue to do so, from the emergence of hip hop fashion thanks to icons of style like Missa Hylton, to the inventive remixing of Dapper Dan, back to the brazen political sentiment of zoot-suits, and Black designers like Ann Lowe. This article highlights 10 black fashion designers you should follow.

Unfortunately, Black creators and tastemakers’ contributions are frequently ignored, suppressed, or improperly acknowledged.Despite the fact that there are more Black fashion industry leaders than ever before, the number is still insufficient (given that “before” meant none, the bar wasn’t set particularly high). In order to move ahead, it is critical that we remember historical wrongs and give the Black community’s voices more prominence. What is the simplest method for doing this? Giving the several powerful Black fashion figures on social media a follow. 10 black fashion influencers, designers, entrepreneurs, and fashion superstars who are revolutionizing the industry can be found in this article.

Instagram, Facebook, Snapchat, Tiktok and Social media in general is full of talented individuals, from Fashion, lifestyle, health, beauty, sport, art and so much more. When it comes to Lifestyle, social media is one of the best place you can find inspiration especially when it comes to Fashion.‍ A lot of Black Fashion influencers have leveraged on social media to push their brand forward.

However, the kind of content available on fashion and style inspiration can become overwhelming if you’re not familiar with the industry. But there are a few key individuals that stand out from the crowd with their skill and passion for Fashion.

Our list of ten Black fashion influencers below are not ranked in any particular order. If you aren’t already following them, give them a follow to be continuously inspired by their creativity! To further ensure authentic information, not all of them have extremely massive following because massive followership does not translate to perfection of skills.

If you are looking for the best style  tips and fashion tricks to enhance your dress sense and style routine especially if you are not a professional in the business of styling, we highly recommend that you look through the list below.

First on our list of black fashion influencers you should follow is Elaine Welteroth. An award-winning journalist, New York Times bestselling author, producer, judge on Project Runway, talk show co-host, and to top it all off is impeccably stylish.

Welteroth’s six-year stay at Teen Vogue, during which she served as the publication’s first-ever Black beauty editor and then as its youngest editor-in-chief, was just the beginning of her career. Her first novel, More Than Enough, became a bestseller right away in 2019 and won an NAACP Image Award the following year. She was chosen as Michelle Obama’s When We All Vote initiative’s cultural ambassador. The multi-hyphenate has also written for the popular television program Grown-ish and featured on camera as a social change expert and advocate for a number of media sources, including Netflix and ABC News.

At Howard University in Washington, Anok Yai was taking part in the homecoming weekend when photographer Steven Hall took a street style picture of her. Within days, the picture catapulted her into the world of full-time modeling. Yai, an Egyptian biochemistry student from Cairo, had no intention of modeling when she started, but today you can spot her in Givenchy, Saint Laurent, Estee Lauder, and many more well-known commercials. Yai is still dedicated to her STEM studies and promoting STEM vocations among young women and girls of color. She is one of the black fashion influencers you should follow as she is very vocal about the need to combat colorism and give dark-skinned Black women more exposure in the media.

In 2019, as one of the black fashion influencers you should follow, Adut won the Model of the Year award at The British Fashion Awards in London and one scroll through her inspiring, editorial photoshoot-filled Instagram will tell you why.

Precious Lee is one of the black fashion influencers who is a trailblazing curve model, fiercely committed to racial fairness and who possesses a multifaceted sense of style. Lee can pull off being grungy one day and bubble gum pink the next. This varied taste and Lee’s extraordinary persistence are what have made her the leading Black curve model of high fashion, a category that didn’t truly exist in the luxury industry before Lee. She has been the face of advertisements for brands including Versace, Christian Siriano, Tommy Hilfiger, Area, and more. You may follow the IMG-signed model on Instagram to view both her professional and personal life.

Law Roach, a celebrity stylist, and one of the black fashion influencers who may be known to you from his tenure as a judge on America’s Next Top Model or from his most recent judging position on HBO Max’s Legendary. In addition to being a TV personality, the self-described “image architect” is in charge of Zendaya’s innumerable famous red carpet ensembles and magazine covers, as well as Celine Dion’s transition into a fashion icon. The styling of Ariana Grande, Monica Brown, Brandy, and Jessie J was also the brainchild of Roach.

The American fashion stylist Jason Bolden is one of the black fashion influencers you should follow and also a very successful businessman, creative director, and interior designer. Born in St. Louis, Missouri, Bolden started his career in fashion by working in high-end retail for companies like Gucci, Chloe, and Oscar de la Renta. His interests rapidly led him to New York City, where he established The Garment Room, a vintage shop in SoHo. Bolden attracted designers’ attention with his minimalist style and meticulously curated store, and he soon started consulting with them.

Chrissy Rutherford is one of the black fashion influencers who has over 12 years of expertise in the fashion and social media industries. She and fellow editor Danielle Prescod co-founded their present business, 2BG, in June 2020 while everyone was on their coach in quarantine. The two offer consultancy and guidance on how to adopt anti-racist communication tactics to fashion and beauty firms as well as influencers. Rutherford works as a contributing editor for Harper’s Bazaar in addition to serving as a consultant for 2BG clients. She was nominated for an ASME Award for social media in 2019 and promotes mental health awareness on her own Instagram while frequently disclosing her own experiences with anxiety.

Aurora James began her career in the fashion industry as a journalist at Fashion Television under Jeanne Beker, but she always desired to be a designer and, more importantly, a storyteller. She launched her company Brother Vellies in January 2013 after visiting Africa in 2011 and spent two years exploring designs with several local craftspeople. The company’s objective, which now spans the entire continent from Morocco to Kenya to South Africa, is to preserve the art of African shoemaking while generating new employment opportunities for artisans working in Brother Vellies facilities.

In response to the murder of George Floyd and ongoing national protests, James founded the 15 Percent Pledge charity and petition that calls for major brands like Whole Foods, Sephora, Bergdorf Goodman, and more to dedicate 15 percent of their shelf space to Black-owned businesses (15 percent, because Black people make up 15 percent of the population). She is one of the black fashion influencers you should follow.

You cannot talk about black fashion influencers without talking about Dapper Dan. He is a sartorial legend at the heart of today’s booming luxury streetwear and hip hop-inspired fashion industry is Harlem designer Daniel Day, also known as Dapper Dan. In 1982, he opened Dapper Dan’s Boutique, which would grow to be known for its custom designs and upcycled high fashion items. The artist A$AP Ferg stated to The New York Times that his father, Darold Ferguson Sr., worked at the store and “Dap curated hip-hop culture.” And he did it up until the 1990s, when a well-known FBI raid on his boutique and legal action brought by luxury brands forced him out of business.

Brands like Louis Vuitton and Gucci were upset over his reuse of their logos at the expense of a selection of their celebrity clientele who came to prefer his work over theirs. Day was forced to close his storefront, but continued designing underground for clients like Big Daddy Kane, Eric B. and Rakim, KRS-One, LL Cool J, Jay-Z, and more. Fast forward about two decades and Gucci Creative Director Alessandro Michele came under fire for copying a leather logo-clad balloon sleeve jacket Dapper Dan made for Olympic sprinter Diane Dixon. The ordeal surprisingly resulted in an apology from Michele as well as the release of a collaborative collection: Gucci x Dapper Dan.