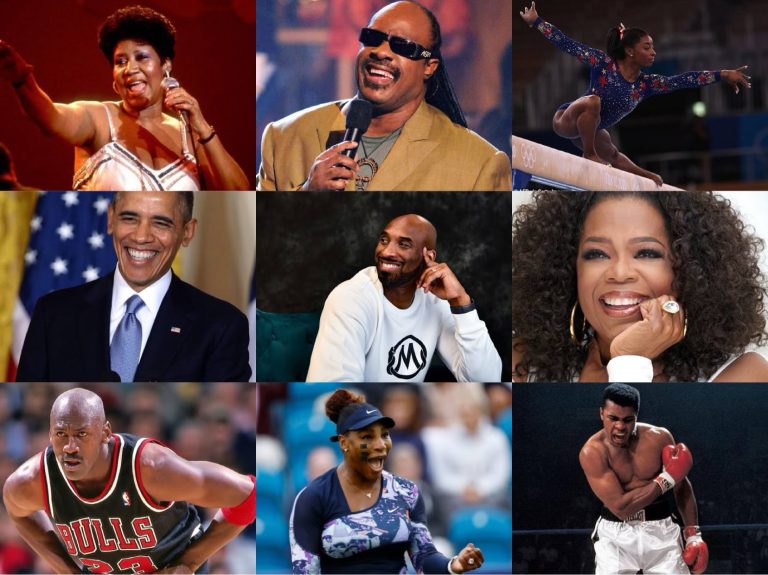 Black people are one of the most talented race of people in the world. They break barriers of segregation and discrimination to make their mark in the sands of time. In celebration of black talent and determination, here is a list of 10 Guinness World Records held By Black People, who have broken impressive and noteworthy Guinness World Records titles.

Olympic Award winning gymnast, Simone Biles shook the world as she made history by being the first gymnast to perform a double-double dismount on beam during a competition. The double-double refers to an athlete’s ability to do a double twist as well as a two flips off a beam – and the effect is mesmerizing.

Simone performed the dismount en route to winning her sixth U.S all round title at the United States National Gymnastics Championships, in Kansas City, Missouri, USA, on 11 August 2019. This is one of the Guinness records held by black people.

Perhaps one of the most famous Guinness records held by black people yet, is by former President, Barack Hussein Obama II was inaugurated as the 44th President of the USA on 20 January 2009. This record follows a record-breaking campaign which made him the first African-American President of the United States of America.

Also, In the September before the election, Obama raised a monthly record of $150 million, taking his fundraising total to over $605 million.  During the election, 136 million voters turned out on election day – the most since 1960 – and more than two million descended on the Capitol in Washington, DC for his inauguration.

Oprah Winfrey—Highest annual earnings for a Female television personality ever

One of the most popular television personalities also holds a record in the list of Guinness world records held by black people. Oprah Winfrey has worn many hats throughout her thriving career, including; media executive, actress, talk show host, television producer, and magazine Editor in Chief of her very own publication.

Also regarded as one of the most influential women in the world, her Guinness World Records title relates to her overwhelming success. Between June 2009 and June 2010, Oprah Winfrey earned an estimated $275 million from her magazine, radio contract, production company Harpo and the debut of the Oprah Winfrey Network.

She also has the record for the largest TV contract, after she signed a deal in 2003 for $279 million with the American TV station, ABC, to host The Oprah Winfrey Show for an extra two years until 2008.

Our list of Guinness World Records held by black people cannot be complete without mentioning kobe Bryant’s record. Late Kobe was a  former-Los Angeles Lakers shooting guard who was highly respected on and off the court. The NBA superstar and basket ball icon  entered the NBA straight out of high school in 1996 and utilized his passion and perseverance to earn five NBA championships, 18 NBA All-Star selections, as well as two Olympic gold medals during his playing career.

Most notably, he made history early on in his career at the age of 18 years 158 days, when he started his first NBA game for the Los Angeles Lakers against the Dallas Mavericks on 28 January 1997, breaking the record for being the world’s youngest NBA player to start a game. Over the course of his career, Bryant has held other legendary records throughout his career, including most wins of the NBA All-Star Game MVP and first person to win an Olympic medal and an Oscar.

Sadly, the world suffered the devastating loss of the passing of retired NBA superstar and global icon, Kobe Bryant and his 13-year-old daughter Gianna Maria in a helicopter crash in January 2020.

One of the most legendary basketball players in history is none other than Michael Jordan, who had an incredible 15 season career as shooting guard in the NBA. Jordan won six championships with the Chicago Bulls and was one of the few players in history to also play Minor League Baseball.

His title is one of the Guinness World Records held by black people that is noteworthy. As a show of Michael’s reflection of his prolific athleticism in the league, he has the world’s highest point scoring average for players exceeding 10,000 points at 30.1 and scored 32,292 points in 1,072 games for the Chicago Bulls, 1984-98, and the Washington Wizards 2001-03.

Holding one of the records in list of Guinness World Records held by black people and also in the list history making athletes is, tennis powerhouse champion Serena Williams.

Serena Williams is an American pro player and former No.1 in the singles category as ranked by the Women’s Tennis Association. She holds the most Grand Slam titles in singles, doubles, and mixed doubles combined among active players. Not only did Serena Williams win the Australian Open while three months pregnant in 2017, she also broke the record during that tournament for being world’s oldest tennis Grand Slam singles winner, having achieved her 23rd Grand Slam singles title at 35 years and 124 days.

Nicknamed “The Greatest” for a reason, Muhammad Ali is one of the most significant sports figures of all time. Also known for being the leading heavyweight boxer of the 20th century, with success as a musician and receiving two Grammy nominations.

From the culmination of his success, he ultimately named Fighter of the Year by The Ring magazine six times, the most of any boxer, earning him a place on the list of Guinness World Records held by black people.

Stevie Wonder has made an incredible impact in the music industry as a talented performer, singer, songwriter, and record producer, and he bags a place in the list of Guinness World Records held by black people.

Over the course of Stevie’s career, he has become the record holder for the most Grammy Awards won by a solo pop performer ever with 22 awards. He has won Best Male R&B Vocal Performance six times since 1973; his 22nd award was for Best Pop Collaboration With Vocals which he shared with Tony Bennett, on 11 February 2007.

Queen of Soul Aretha Franklin is most known for her incredible hits – including ‘Respect”, “Think”, and “I Say a Little Prayer”. Her talent was apparent at a young age, as she would use her larger than life voice to sing in her father’s church.

Eventually, Aretha would go on to sign with Columbia records and become a top R&B performer. Apart from one of the most respected musicians of all time, she is also the first female artist inducted into the Rock and Roll Hall of Fame as part of the class of 1987, one of the Guinness World Records held by black people.

Also known as “Queen Bey” by her beloved fans, Beyonce has won 26 MTV Video Music Awards, from 2003 to 2016. These awards include six trophies at the 2016 ceremony for the video “Formation” (Video of the Year, Best Choreography, Best Cinematography, Best Direction, Best Editing and Best Pop Video), the lead single from her sixth studio album Lemonade.

In all, Beyonce won eight awards in 2016, tying Lady Gaga’s 2010 record for the most wins by a female in one night and unseating Madonna’s 20 wins in 1986–99 as the act with the most wins in the history of the VMAs and one of the Guinness World Records held by black people.

Since its inception in 1955, the Guinness Book of World Records has served as a definitive source for vetting human records and achievement, and many people today actively look to have their names entered in to the record book.

10 Most Popular Arts And Paintings By Black Artists