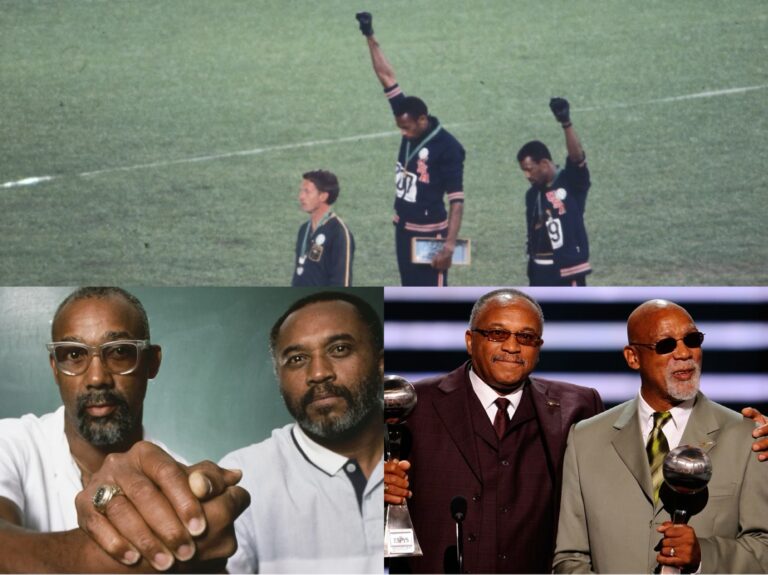 At the 1968 Olympics, sprinters Tommie Smith and John Carlos received backlash after making a defiant gesture from the podium. However, they also garnered respect and admiration.

African American sprinters Tommie Smith and John Carlos accepted their individual gold and bronze medals in the 200-meter event on the podium on October 16, 1968, in Mexico City while donning beads and scarves to protest lynchings and black socks without shoes to draw attention to poverty. However, it was just one piece of clothing—a black glove—and an associated motion—a raised fist during the playing of the American national anthem—that caused a stir. From that point forward, the two players would face abuse, threats, and even praise in some places.

Smith and Carlos’ personal and professional life were affected for years after using the 1968 Olympics medal presentation to show support for persecuted Black people around the world. The men’s gesture at the platform, which was widely regarded as a “Black Power salute,” was by no means accidental. Instead, according to historians, it was a natural consequence of the political environment in the late 1960s.

Both the Rev. Martin Luther King, Jr. and U.S. Sen. Robert F. Kennedy had been assassinated in 1968. Civil unrest spurred by King’s killing and racial injustice spread throughout multiple cities. Vietnam War protests on and off college campuses also spread nationally. The violence police unleashed on these protesters, notably at the 1968 Democratic National Convention in Chicago, made international headlines.

Younger activists decided that a militant political stance would better serve them after King’s killing and rampant police brutality, despite the fact that King had continuously preached a message of nonviolence before his death.

“Within this rise of Black power, we see athletes making very necessary connections in terms of things that they faced within sports and also things that they faced in society writ large, and also understanding that athletes had a platform that they could put to use…,” says Amy Bass, professor of sport studies at Manhattanville College and author of Not the Triumph but the Struggle: The 1968 Olympics and the Making of the Black Athlete. “The spotlight that they had is a rare spotlight for Black men in 1968. So being able to commit a peaceful meaningful global protest, my goodness, that’s a one-in-a-million chance.”

Smith and Carlos, both San Jose State University students, were acutely aware of the persecution that underprivileged groups endured as well as the current political challenges. The Olympic Project for Human Rights was started by Harry Edwards, a sociology professor at San Jose State, with Smith and Carlos as its leaders. The project promoted Black athletes while concentrating on the well-being of Black people worldwide. In particular, they lobbied for the exclusion of South Africa and (what is now) Zimbabwe from the Olympics because they practiced apartheid and the hiring of Black coaches.

“Edwards sort of painted himself as the originator of Black athletes making protests in American history and around the globe,” says Mark S. Dyreson, a Penn State kinesiology professor and affiliate history professor. “He’s standing on the shoulders of people like Jackie Robinson, Mal Whitfield, Jesse Owens and dozens of athletes that people have forgotten about.”

According to Dyreson, Edwards alleged that elder sportsmen like Robinson did not work hard enough to advance racial equality off the field. This disregarded Robinson’s activism against South African apartheid and in support of the American civil rights movement. On and off the field, Black athletes have a much longer history of advocacy, says Dyreson. The advocacy of athletes who came before them, like Smith and Carlos, benefited them. For instance, track and field desegregated on numerous college campuses and in other settings in the early 20th century.

Tommie Smith and John Carlos at the 1968 Olympics

Smith and Carlos, two members of the Olympic Project for Human Rights, debated boycotting the competition. Lou Alcindor (now known as Kareem Abdul-Jabbar) opted not to attend the event, but Smith and Carlos decided to go in part for the chance to express their human rights concerns in front of tens of thousands of spectators.

“They demand things like the restoration of Muhammad Ali‘s boxing title because he was a conscientious objector in Vietnam,” Bass says. “They’re demanding Black coaches being added to the United States Olympic team, they’re demanding that Black members be added to the International Olympic Committee and they’re threatening this boycott, but most of them do go and what they sort of vote on is to protest individually.”

Smith and Carlos were deeply concerned about an incident that occurred 10 days before the Summer Games began, in addition to better treatment for persons of African origin everywhere. On October 2, 1968, Mexican military and police personnel opened fire on an assembly of unarmed student demonstrators, killing up to 300 children (official estimates of the number of dead remains uncertain). The pair’s decision to make a political statement at the Olympics was influenced by this occurrence as well as their pre-existing worries about human rights.

After winning the gold and the bronze medals in the 200-meter race (a white Australian athlete named Peter Normanwon the silver), the duo stepped up to the podium wearing their symbolic beads, scarves, socks and gloved fists. Carlos used a black T-shirt to conceal the “USA” on his uniform to “reflect the shame I felt that my country was traveling at a snail’s pace toward something that should be obvious to all people of good will,” he explained later in his book, The John Carlos Story: The Sports Moment That Changed the World.Both men also wore Olympic Project for Human Rights badges, as did Norman, who’d asked how he could support their cause.

Sharing just one pair of gloves—Smith wore a glove on his right hand, and Carlos wore one on his left—the Black Olympians raised their fists as “The Star-Spangled Banner” began.

“The stadium became eerily quiet,” Carlos recalled in his memoir. “…There’s something awful about hearing 50,000 people go silent, like being in the eye of a hurricane.” He remembered that some spectators booed them, while others shouted the national anthem at them in defiance. “They screamed it to the point where it seemed less a national anthem than a barbaric call to arms,” he wrote.

Aftermath of the protest at the 1968 Olympics

Bass notes how coverage of the gesture was amplified in the United States because the 1968 Olympics marked the first time an American network had broadcast the Games. “It was a big deal,” she says. “Before that, you had sort of 15-minute snippets of updates . . . and suddenly you had 44 hours of coverage. So, there’s like 400 million eyes on Smith and Carlos. That’s the power of post-World War II media as it’s emerging.”

For their peaceful protest, Smith and Carlos were suspended from the U.S. Olympic team and forced out of the Olympic Village. Death threats awaited them when they made it back to the United States. Their political statement cost them greatly, according to Douglas Hartmann, author of Race, Culture, and the Revolt of the Black Athlete: The 1968 Olympic Protests and Their Aftermath.

According to Hartmann, “the overwhelming majority of Americans considered them as traitors, as villains, or, at the at least, as unAmerican, unpatriotic.” That put an end to Smith’s military ambitions, who was enrolled in the ROTC at the time. Both went through significant personal struggles. Their unions broke down. For a long time, Carlos struggled to find work.

Smith played three seasons for the Cincinnati Bengals, and Carlos played one season for the Philadelphia Eagles and one for the Canadian Football League before briefly becoming NFL stars. Later, Carlos worked as a community liaison during the 1984 Summer Olympics in Los Angeles.

Both men had jobs related to education. Smith was the head track coach at the historically racially progressive Oberlin College in 1972. After graduating from Oberlin, Smith worked as a cross-country and track coach at Santa Monica College in the Los Angeles area. At Palm Springs High School in Southern California, Carlos accepted a position as a guidance counselor.

Smith was careful not to refer to the motion he and Carlos did as a Black Power salute throughout the years. Instead, according to Hartmann, Smith said that the action “stood for the community and power in Black America.” He didn’t want to appear radicalized. He resembled the typical American individualist far more. He had intentions of joining the military, you know. He had patriotism. He believed that we needed to alter a lot about race, but not necessarily from a radical political standpoint.

In 2008, 40 years after they raised their fists during their 1968 Olympics medal ceremony, Smith and John Carlos were honored with Arthur Ashe Award for Courage. Eight years later, then-President Barack Obama recognized them during a White House ceremony.

“Their powerful silent protest in the 1968 Olympics was controversial, but it woke folks up and created greater opportunity for those that followed,” Obama said of Smith and Carlos, who were asked to become U.S. Olympic Committee ambassadors in 2016.

Their gesture is considered one of the most political in the history of the modern Olympic Games. But Smith remarked in the HBO documentary Fists of Freedom: The Story of the ’68 Summer Games that the act did not symbolize a hatred for the U.S. flag but an acknowledgement of it.

Historian Edward Widmer, a professor in the Macaulay Honors College at the City University of New York, says it embarrassed the leadership of the United States. “It was a real reminder to the world that the U.S., which preaches human rights and democracy, was not always so strong on human rights in its own country.” But, Widmer adds, “It’s clear it was actually a very patriotic gesture. [Smith and Carlos] wanted America to be better and to be just for all of its people, so it was calling on America to be a better country.”

For his part, Smith has described the raised fists as “a cry for freedom and for human rights,” adding, “We had to be seen because we couldn’t be heard.”