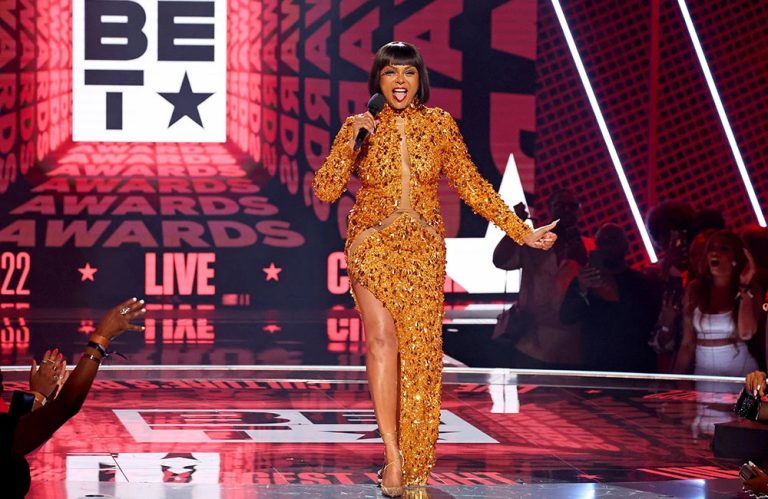 The 2022 BET Awards aired live from the Microsoft Theater in Los Angeles on Sunday, June 26th.

Lizzo opened the night with an electrifying performance in a gold disco ball-Esque jumpsuit, singing her current hit “About Damn Time,” before the host, Taraji P. Henson welcomed the packed audience.

The show featured a slew of performances, including surprise appearances by some of our favorite 90s artists. Among them were Jack Harlow’s set, which included a cameo from Lil Wayne for their new song “Poison,” as well as Brandy, who appeared to perform her freestyle verse on Harlow’s hit song “First Class.”

Latto, who won Best New Artist, performed her singles “It’s Giving” and “Big Energy,” the latter of which featured an appearance by Mariah Carey, who brought her signature voice and falsetto notes for a fitting remix.

Roddy Rich and Babyface also joined Ella Mai for unforgettable performances of her songs “DMFU,” “Keeps on Fallin’,” and “How.” The stage was also shut down by Kirk Franklin and Maverick City Music, Chance the Rapper and Joey Bada$$, Muni Long, Doechii, Fireboy DML, Chlöe, and GIVÉON.

But perhaps the most entertaining moment of all was when Sean “Diddy” Combs was presented with this year’s Lifetime Achievement Award.

Following a nostalgic tribute by Jodeci, who performed “Come & Talk to Me,” and BET Her Award-winner Mary J. Blige, who performed “I’m Going Down,” Puffy performed a medley of Bad Boy Records hits with an all-star lineup that included Shyne, Lil Kim, Bryson Tiller, Faith Evans, and Maverick City Music.

Diddy received a standing ovation as he accepted the well-deserved award after being introduced by Babyface and Kanye “Ye” West. Diddy announced during his speech that he would donate $1 million to Howard University and another $1 million to Deion Sanders and Jackson State University.

Various stars in addition to the musical acts and tributes used their platforms to speak out against the recent overturning of Roe v. Wade and increasing gun violence across the country, including Jazmine Sullivan, Taraji P. Henson, and Janelle Monae (who most eloquently and succinctly summed up most of the country’s feelings by saying, “Fuck you, Supreme Court.”)

Here are the looks of Black celebrities showing up to slay the Red Carpet with their dresses, suits, and other outfits they had in mind. Everyone from pop stars like Lizzo to A-list actors like Taraji P. Henson:

The names of the winners of the 2022 BET awards are as follows:

VIDEO OF THE YEAR

VIDEO DIRECTOR OF THE YEAR

ALBUM OF THE YEAR

SPORTSWOMAN OF THE YEAR AWARD

SPORTSMAN OF THE YEAR AWARD