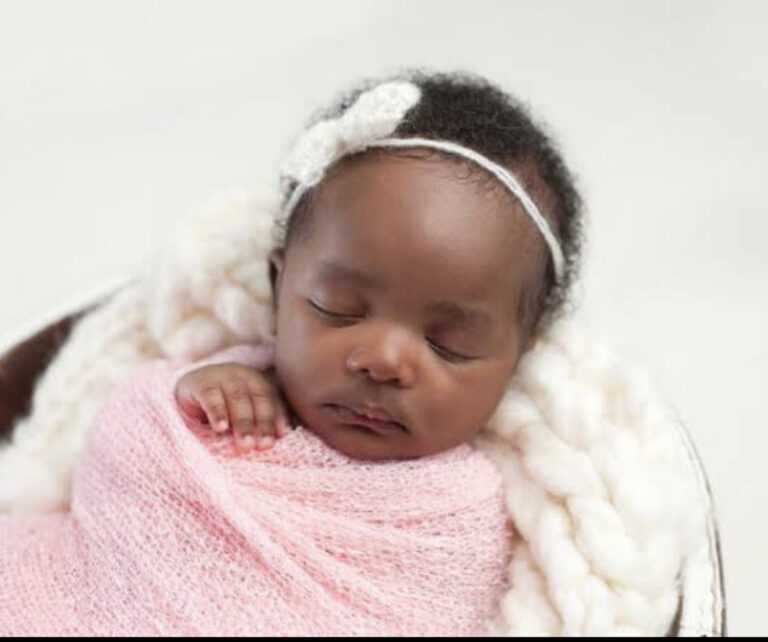 Names are a huge part of identity in Africa. They aren’t just merely given when a child is born. Most African names are influenced by the circumstances surrounding the birth of the child. African Names carry history and legacies and that’s why every indigenous African name is deeply meaningful. This article highlights 60 cute African girl names and their meanings just incase you are thinking of giving your new born daughter an African name.

For the rest of our lives and even after, our name follows us. To give meaning to the lives of the newborns, considerable emphasis is paid in African tradition to the naming procedure. African baby girl names have origins in several distinct African cultures. The following African girl names have been derived from a variety of societies and places, including South Africa, Ghana, Uganda, Swahili, etc.

The majority of African girl names listed in this article  are brief and have a profound significance. To make things simpler, we have curated 60 popular names from from various African communities and traditions. Choosing an African name for your infant  can be a difficult undertaking, but the names listed here will assist you in doing so.

The following African girl names that are drawn from different countries and cultures in Africa. Most of these names have a much deeper meaning apart from their literal meanings.

A variant name for Abena, Abeni is a melodic African girl name of Yoruban origin. The name means ‘we asked for her, and behold, we got her’.

Adeniyi is a well-loved feminine African girl name of the Yoruba of Nigerian origin. This beautiful name is perfect for girls who are bold and have strong character as it means ‘crown has honour’.

Ama is a short and popular African girl name. Ama is referred to as a day name by the Akan people of Ghana for ‘baby girls born on Saturday’. This also means ‘water’.

Amandla is a well-known girl name of African – Zulu/Xhosa origin. The name means ‘power’ and ‘powerful woman’. If you want to raise your daughter as a strong and independent girl, this name will definitely suit her future personality.

Asante is a gender-neutral name derived from the African – Kiswahili origin. It means ‘thank you’.

Adaugo is a very beautiful African girl name from the Igbo ethnic group in west Africa. It is a name given to first daughters and it literally means Eagle. This name connotes honour.

Girls are loved and adored in Africa, and this name is a proof of it! An African origin name, Bisa means ‘greatly loved.’

Ghanaian people love to name their children on the day they are born. Efua is one such example which is given to baby girls ‘who are born on Friday’.

The name was the first common amongst Swahili speaking people. Eshe means ‘life and energy’ both of which reflect positivity, zeal and enthusiasm towards life! One of the best choices for female African names, it ascertains your little one would never lack the zeal and energy in life!

This African girl name is rare to find! Fajah means ‘thanks!’

This is a popular name of Egyptian origin name. was the name derived from the goddess Isis of the Egyptian pantheon.

This beautiful African girl name belongs to the African – Nguni origin. It means ‘the wheel’.

Jemila is a name originated in Somalia and amongst Swahili speaking people. It means beautiful, Jemila is also famous in Arab and other African countries.

To be grateful and thankful for all that you have is the perfect sign of humility! Jendayi is a Zimbabwe origin name which means ‘grateful and thankful.’ An African girl name with a beautiful meaning, you must give this name a thought if you want to inculcate the values of being humble in your daughter! This name would remind her to be the same time and again!

Jina is a beautiful African girl name with a poetic meaning which makes it an ideal choice for someone who has waited a long time for a daughter. The name means ‘named child’.

This is another beautiful Igbo African girl name. It means Mercy

Makeba is unique and rarely found baby girl names. It is an Ethiopian name which means ‘greatness.’ A famous bearer of the name is the infamous singer Miram Makeba from South Africa! Another variant of the name is Makeda.

Nantale is a feminine name of African-Uganda origin, which means ‘totem of the lion’. The impressive name is perfect for a little girl who has a brave and strong character.

Mugisa is a gender-neutral given name of African Uganda origin. It means ‘blessing’.

Coming from the Northern African belt, the name Nathifa means ‘pure’. Nathifa is surely a unique African girl name which will ideally suit your little daughter.

This unique name was originated from Central Africa. The unique and beautiful name is said to have different meanings, but the one that suits best is ‘beautiful.’ A famous bearer of the name is Queen Nzinga Mbandi who fought against the Portuguese colonizers in Southwest Africa.

Although sounds slightly unconventional for an African name, Nakeisha is of African origin. It is a uniquely beautiful name that means ‘her life.’

An African origin name which means ‘victorious maiden.’ Similar to Michelle, Nichelle is a cute feminine african girl name that has a deep meaning attached to it!

Penha or Penda is a beautiful African girl name which means ‘loved’, ‘admired’, and ‘beloved’.

This is a popular African girl name. It is of Swahili origin and means ‘beautiful.’

This is a beautiful traditional African girl name which means ‘friendly or hospitable.’

This is also another beautiful Igbo African girl name. It means princess/ King’s daughter as is usually given to first daughters

This is a Yoruba name, that means “born with honor.”

Abimbola is both a gender-neutral first name and a surname, although its most frequent use in the U.S. is as a forename for girls.

Achieng is a Luo name that means  “born when the sun shines.”

Achieng is the feminine form of the Luo boy’s name Ochieng. In Luo, the language spoken by the Luo people of Kenya, chieng means “sun.”

Adhiambo is also a Luo name. It means  “born in the evening.”

If you are looking for an African girl name that reflects the time your little one was born, then Adhiambo is ideal for a child born before nightfall.

Adannaya is an Igbo name, meaning “her father’s daughter.”

The fabulous definition of this name from Nigeria makes it ideal for Daddy’s girls.

Because there are multiple Akan dialects, Adwoa may be spelled differently depending on the sub-group of the Akan speaker. For example, Fante parents may spell the name Ajuba, Adjoa, or Ajua. As previously mentioned, Ghanaians love to name their child after days of the week.

Alemayehu is an amazing Amharic name, which means  “I have enjoyed life.”

This gender-neutral African girl name is most often used in Ethiopia. The literal translation is “I have seen the world,” but the meaning changes slightly when alem and ayehu are combined as a name.

Alheri is a Hausa name from northern Nigeria which means  “grace.”

Amahle is a beautiful Zulu African girl name that means “the beautiful ones.”

Andile means “they have increased.”

It is a name in Zulu, Ndebele, and Xhosa, which are all languages spoken in South Africa. It is also unisex.

Babirye is a Ganda name that means “first of twins.”

Babirye is a unisex name given to the firstborn of a set of twins. The moniker generally given to the second twin if they are female is Nakato, meaning “second of twins.” If they are male, it is the shorter version, Kato.

Boipelo is a Tswana name that means  “proud.”

Bolanle is a Yoruba Nigerian name that means “finds wealth at home.”

This is a beautiful Shona name which means “gift.”

The lovely Shona name Danai means “to call, summon.” A popular bearer of the name is hollywood actress, Danai Gurira.

Efe is a unisex Urhobo name that means “wealth.”

Efe is used as both a standalone name and a nickname for girls with Urhobo names containing efe, meaning “wealth.”

The Ewe name Enyonam means “it is good for me.”

The lovely Amharic girl name Etenesh means “you are my sister.”

Pronounced ih-FIH-yok, Ifiok is the ideal choice if you’re looking for an African girl name with positive attributes for your child. This name can be used for girls or boys and is most commonly found in Nigeria, with the U.S. being the second most common country for uses of this name.

The name Lindiwe is traditionally used by Zulu, Xhosa, Ndebele, Swazi, and South African families. It’s an excellent name choice for those who have waited a long time for their child.

Marjani is a beautiful Swahili name, which means “coral.”

Majani is also a Sanskrit name that means “purification, cleaning, cleansing.” In this context, Marjani was an attendant of the goddess Durga.

Mũmbi is a Kikuyu name that means “she who shapes.”

According to the Kikuyu creation story, the first man, Gikuyu, and his wife Mũmbi, were placed on earth by the supreme being Ngai. Mũmbi and Gikuyu had nine daughters, who went on to produce many more children, spreading throughout the Mount Kenya region.

Nneka is an Igbo name which means “mother is supreme.”

This short two-syllable girl name has a youthful, feminine ring but would not be out of place when your child is older.

In the Kikuyu origin mythology, Njeri is the name of one of Mũmbi and Gikuyu’s nine daughters.

Sekai is a cute Shona name which means  “be humorous.”

When so many names are chosen in the hope of bestowing wealth or wisdom, it is refreshing to find a name that seeks to impart the gift of humor.