A Michael Jordan jersey sells for over $10 million, setting a new record  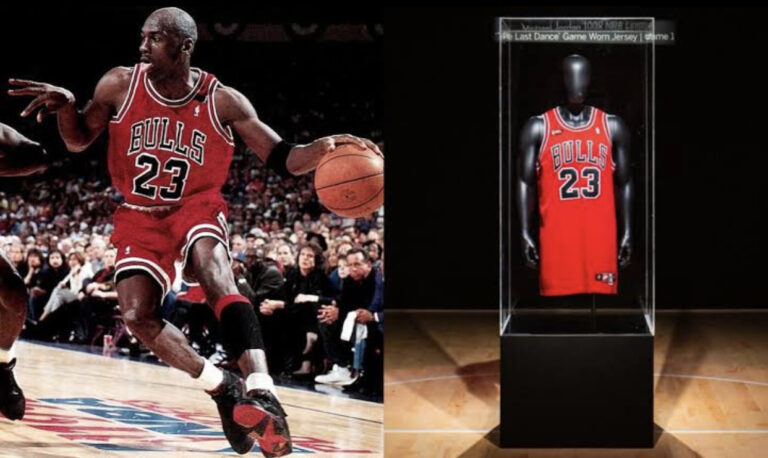 The most expensive item of game-used sports memorabilia ever purchased at auction was a Michael Jordan jersey that was used by the legendary basketball player and sold for $10.1 million.

The item was sold on Thursday at Sotheby’s “INVICTUS” a two-part auction of sports artifacts. The bright red shirt with the words, “Bulls 23,” amassed 20 bids, Sotheby’s told NPR.

Michael Jordan wore the jersey during Game 1 of the 1998 NBA Finals. His team, the Chicago Bulls, would go on to win the championship series against the Utah Jazz.

According to Fox Business, the exact $10.091 million that was spent on the jersey surpassed the previous record set for an NBA game-worn jersey owned by the late Los Angeles Lakers small forward and shooting guard, Kobe Bryant. The Black Mamba’s jersey sold for $3.69 million at an auction last year in May. Bryant wore the famous jersey during his rookie year from 1996 to 1997.

Jordan’s jersey surpassed a record for another jersey that was previously auctioned. The item, Diego Maradona’s “Hand of God” jersey, was auctionedfor $9.28 million. Maradona wore the valuable item at the 1986 World Cup.

“In the weeks since we announced the auction, there’s been palpable excitement from, not only sports fans, but collectors alike who are eager to own a rarified piece of history,” Brahm Wachter, Sotheby’s head of streetwear and modern collectibles, told Fox Business.

The “record-breaking result,” Wachter continued, “solidifies Michael Jordan as the undisputed GOAT, proving his name and incomparable legacy is just as relevant as it was nearly 25 years ago.”