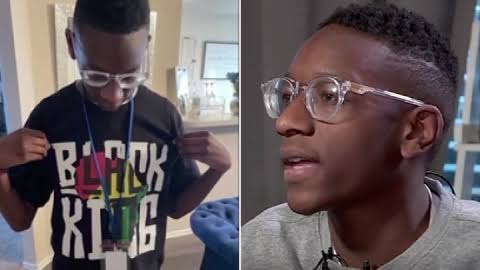 An black man conscious of his roots and his history has proven to be a threat to white supremacy. No matter how young that black man or woman is. This is shown in the case of a thirteen year old seventh-grader Latrell Taft said he was in a science class at Heartland Middle School in Edmond, Oklahoma; on Tuesday when his White teacher suddenly stopped the lesson to make him know the; “Black King” emblazoned on the T-shirt he was wearing was racist. 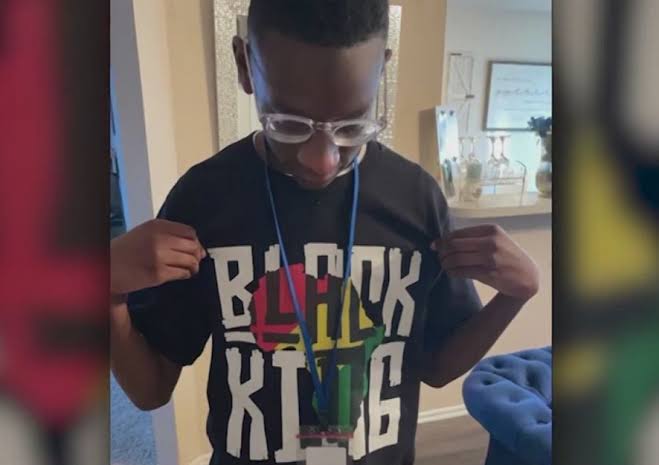 In an interview with KFOR, Taft, who got the T-shirt as a birthday present; said the incident left him embarrassed and confused as he was elated to wear his new top to school. “She said that if she had a shirt that said white queen it would have been racist,” he said. “Then after that, she said we need a white history month. I said black people don’t have enough recognition; and we barely learn about black people in February at my school.”

Besides that teacher registering her displeasure with his Black is king T-shirt; Taft also revealed a majority of his classmates agreed with her sentiments about the shirt being racist. “He does have peers who look like him, but very few,” Taft’s mother, Melisa Shirley, said.

Though Taft’s mother contacted school authorities to report the incident; after her son told him what had transpired, she said she was initially “brushed off.” However, the school released a statement to the news outlet saying they were looking into the report twenty-four hours later.

Despite the embarrassment, Taft said that wouldn’t deter him from wearing the shirt again. “I am proud of my blackness and she will never take it away from me,” he said, later adding; “I would tell her black is beautiful.”
Black is king Latrell Taft
Share. Facebook Twitter Pinterest LinkedIn Tumblr Telegram Email
Adaugo