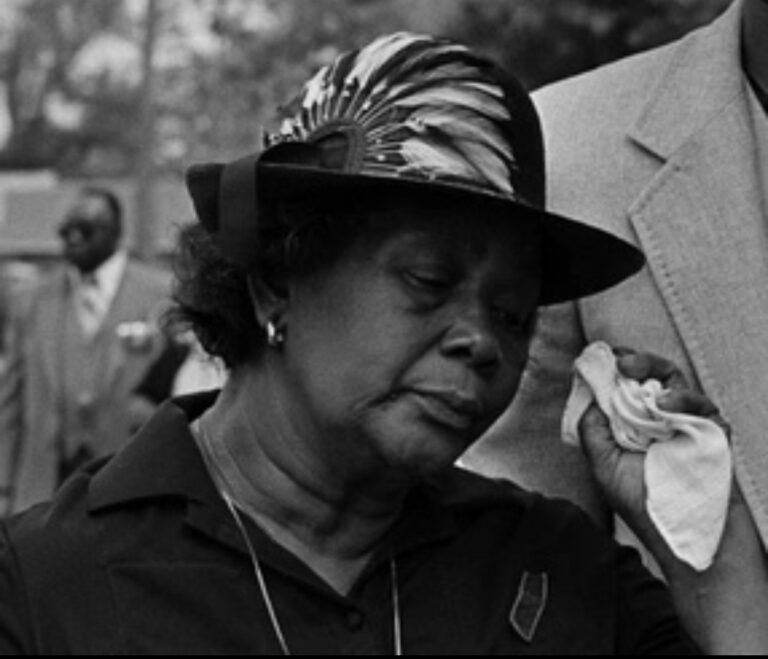 Beulah Mae Donald is best known for filing a civil lawsuit against the KKK after her youngest child Michael Donald was found hanging from a tree in Mobile, Alabama on March 21, 1981. Henry Hays (26 years old at the time) and James Knowles (17 at the time), members of the KKk were the individuals arrested for the murder.

On the evening of March 21, 1981, the Ku Klux Klan grimly protested the verdict of a nearby murder trial by lighting a crucifix on fire on the courthouse lawn in Mobile County. The terrifying events that night were just getting started.

The Klan’s rage persisted despite the cross burning out. Two men roamed Mobile later that night looking for a Black man to kill. Michael Donald, a 19-year-old, was located. Before the night was up, Donald had been killed and his body had been hung from a tree.

It was a lynching in the truest sense of the word that took place in the 20th century, but it would turn out to be the last one because to Michael Donald’s mother Beulah Mae Donald, she was bent on making it a historic civil case.

A Festival of Violence by sociologists Stewart Emory Tolnay and E.M. Beck explains how Michael Donald differed from other lynching victims in that he was not charged with a crime or thought to have broken racial etiquette. Instead, he was murdered because the Klan members were incensed that Josephus Anderson’s second trial, in which he was charged with killing a white policeman, was deemed a mistrial when the jury was unable to agree on a conviction.

For the Klansmen, Tolnay and Beck write, “this meant that a Black man could kill a white man with impunity so long as there were blacks on the jury…[Donald] was killed as a reprisal against the Black community and to confirm the power of the Ku Klux Klan in south Alabama.”

Henry Francis Hays and James “Tiger” Knowles, two enraged Klan members, randomly selected Michael Donald, hunted him down, viciously battered him, and then strangled him to death. That evening, they displayed him to a gathering at the home of Klan senior Bennie Hays before hanging his body from a tree.

Michael’s mother, Beulah Mae Donald, was inconsolable. Beulah Mae Donald insisted on an open casket burial, mirroring Mamie Till, whose son Emmett was killed in one of the most horrifying hate crimes of the 20th century. She set off on a quest to find it for her son as it became increasingly clear that Mobile would not bring her son’s killers to justice.

Even though Mobile police were aware that Michael Donald had been killed by Klansmen, they took their time. They detained three guys who were apparently unrelated to the incident but then freed them without filing any charges, doing little else to advance the case. Beulah Mae Donald organized neighborhood protests that attracted Jesse Jackson and other prominent national civil rights figures’ attention by collaborating with Mobile’s Black community. When the FBI became involved, the investigation was almost over. Beulah pushed them to continue moving forward.

The wheels of justice started to turn gradually. Henry Francis Hays, the son of the second-highest ranking Klan official in Alabama, was detained by authorities in 1983, along with Knowles, who promptly confessed to the FBI. Knowles was the key witness in Hays’ trial, and both men were found guilty and given life sentences for Knowles’ role in Michael’s civil rights violation and death sentences for Hays’ murder. It was the first time a white man in Alabama had received the death penalty for the murder of a Black man since 1913.

Michael’s killers shouldn’t, in Donald’s opinion, be the only ones held accountable for his death. Beulah Mae Donald made contact with Morris Dees, a civil rights lawyer who co-founded the Southern Poverty Law Center in 1971, in 1984, three years after her son was lynched. Dees had a history of suing the KKK and was familiar with how it operated. He believed that the KKK had given the murderers their orders, and they were acting in accordance with institutional policy. In an effort to hold the KKk, one of the largest Klan organizations in the nation, and its members accountable for the murder, they filed a federal wrongful death lawsuit against the group.

The Klan had been terrorizing African Americans in Alabama by that time for more than a century. Particularly the 1963 bombing of Birmingham, Alabama’s 16th Street Baptist Church, the KKK had been connected to some of the most infamous Klan crimes of the 20th century. Four young girls were killed in the blast, which was carried out in retribution for local Black activism. It was one of the most tragic and inspiring episodes in the Civil Rights Movement.

Donald’s civil lawsuit worked. In 1987, the Donald family was awarded a $7 million judgment against the United Klans of America and several of its members. The all-white jury deliberated just four hours. “I’m glad justice was done,” Donald told an Associated Press reporter after the verdict was handed down. “Money don’t mean a thing to me. It won’t bring my child back. But I’m glad they caught the guilty and brought them to court.”

Since the KKk were unable to compensate Donald and her family, it was a historic defeat for the Klan and a deadly one for the organization. Instead, the company offered the Donalds the deed to its Tuscaloosa, Alabama, headquarters, which was only worth $225,000.

Additionally, individual Klan members had to pay: Jesse Kornbluth of the New York Times Magazine wrote at the time of the verdict that when some members’ income and property were seized, Bennie Hays and his son-in-law were indicted using evidence from the civil trial. (Bennie Hays passed away during his second trial; his first criminal trial ended in a mistrial due to his collapse in the courtroom.)

Ultimately, Donald’s refusal to back down changed the options for victims of hate crimes and their families. By successfully arguing that the Klan had agency over its individual members’ actions, Dees established legal precedent that is used to fight the actions of other hate groups in court today. And the lawsuit also discouraged other Klan hate crimes.

Beulah Mae Donald died in 1988, just a year after the historic verdict was handed down. “She was the rock on which [the entire challenge to the Klan] was ultimately built,” her attorney, Michael Figures, told Ebony’s Marilyn Marshall. “She never backed out; she just stayed there.”

How to say hello in 50+ Different African Countries