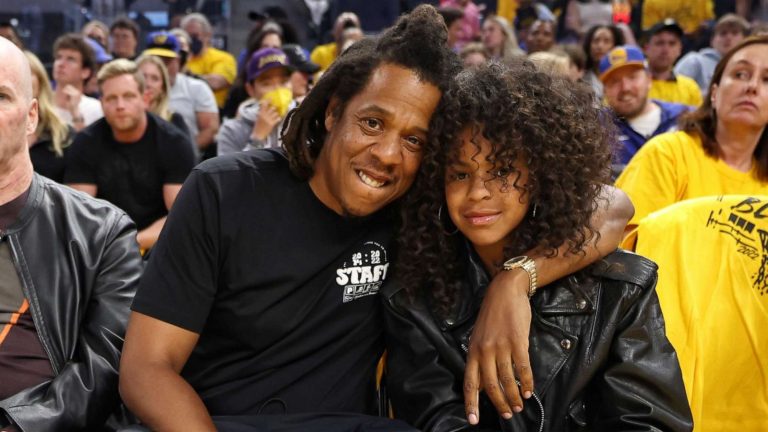 JAY-Z may be one of the greatest rappers of all time, but to his daughter Blue Ivy, he’s just a regular dad.

In a hilarious video, the proud father tries to give his 10-year-old daughter Blue Ivy Carter a hug and kiss while sitting courtside at Game 5 of the NBA Finals between the Golden State Warriors and the Boston Celtics.

But Blue Ivy was unimpressed and, in typical tween fashion, rebuffed his public display of affection. The video quickly went viral, with Black women relating all too well.

According to E News, the 24-time Grammy winner was happy to take Blue Ivy on a daddy-daughter date to the game. According to an eyewitness, “Jay had his arm around her shoulder and was pointing out different things on the court to her.”

Blue served courtside fashion in a black T-shirt with “Brown Skin Girl” written across the front, a leather jacket, sunglasses, hoop earrings, and Nike sneakers. The outfit complemented her voluminous curls, which her father appeared to smush while attempting to share a cute moment on the jumbo screen.

During the viral moment, the 10-year-old appeared to mouth the words “dad my hair” as he put his arm around her.

“RIGHT!? I knew that’s what I read lol!” someone tweeted.

Others were surprised to see how much she’s grown and were shaking their heads at how teens will do you when they approach adolescence.

“How these kids be growing up so fast,” one user wrote with laughing emojis.

“Smh. These kids ain’t loyal, just few years ago he was her all – now she thinks she’s too cool for Hov? Well, she must make another Hov!” a viewer commented.

“She already on hoop earrings?” another added.

Some couldn’t get over how much Blue looked like her mother.

“She’s got Beyoncé’s attitude and facial expressions and I love it!” one user wrote.

“This isn’t Beyoncé?” another retweeted along with the video.

“Beyoncé and blue ivy are literally twins,” a fan wrote with side-by-side images of Blue at the game and the singer with similar curls