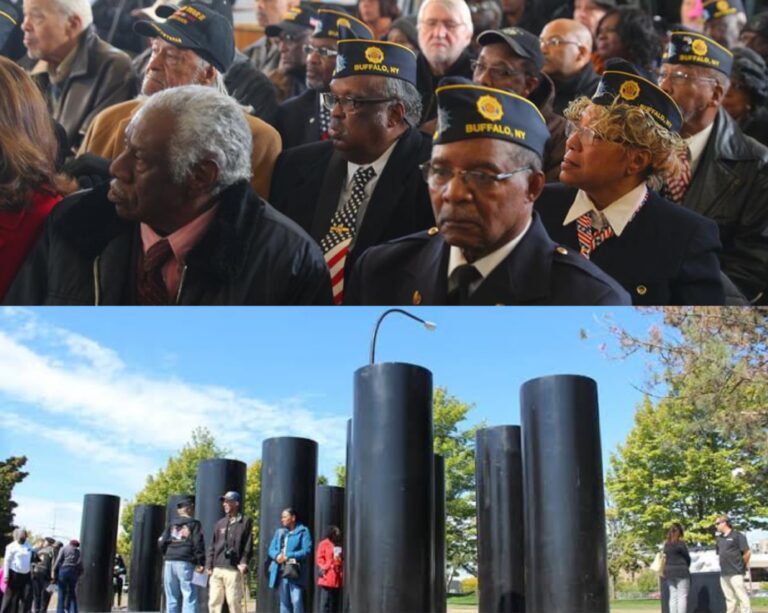 At Buffalo Naval Park, a memorial monument honoring African American Veterans who participated in all 12 of America’s wars has been unveiled for the first time.

According to CBS News, the first monument honoring African American veterans was unveiled on Saturday at Buffalo Naval Park.

The memorial has 12 black pillars to memorialize the Black veterans who have participated in each of the nation’s 12 major wars, going all the way back to the Revolutionary War.

Buffalo Gov. Kathy Hochul noted how “historic” the new monument is during its unveiling.

“This is the dedication, the unveiling, of not just Buffalo’s first, not just New York’s first, but our nation’s first African-American veteran monument,” Hochul said.

The monument includes an exhibit that offers visitors a virtual tour with historical accounts of the African American soldiers.

“THIS MONUMENT WILL EXEMPLIFY EVERYTHING WE LOOK FOR IN OUR BLACK SOLDIERS. THEY WERE OUR HEROES,” LEGISLATOR HOWARD JOHNSON SAID.

“They were our leaders. Our Black soldiers served in a spirit of excellence, making sure that all Americans could enjoy the bastion of freedom.”

According to WIVB,Community leaders came together to advocate for the monument that honors veterans who fought for the country’s liberty and freedom even when those same liberties weren’t extended to all. Along with the 12 black pillars and information on the help of African Americans in every American war, bricks with names of African American veterans surround the ground of the pillars.

“Recognize that African American veterans did do a part in this country, and we weren’t just sitting on the side, we did a very important part and that we should be recognized for,” Robert Johnson, a Vietnam Navy veteran, said.

“Little by little we learn that we can work together and everything is possible, everything is achievable so for that reason, that’s why we’re here.”

Johnson has a brick named in his honor at the new monument. There are still bricks available for those who would like their name or the name of a loved one placed on a brick.

More information on securing a brick can be found HERE.