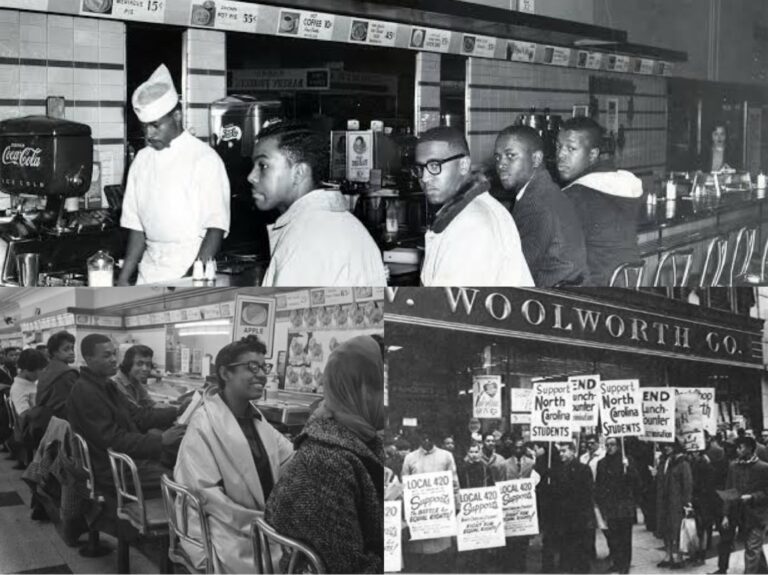 Young African American students in Greensboro, North Carolina, staged a sit-in at a segregated Woolworth’s lunch counter in 1960 and refused to leave after being refused service. This action was the beginning of the Greensboro sit-in, a civil rights protest. The Greensboro sit-in movement quickly extended to Southern college towns. Despite the fact that many of the demonstrators were detained for trespassing, disruptive behavior, or disturbing the peace, their efforts had a significant and long-lasting effect, causing Woolworth’s and other businesses to modify its segregationist practices.

The first sit-in was organized by The Greensboro Four, a group of four young Black men: Ezell Blair Jr., David Richmond, Franklin McCain, and Joseph McNeil. The four were all Agricultural and Technical College of North Carolina students.

They were influenced by Mohandas Gandhi’s nonviolent protest strategies as well as the 1947 Freedom Rides led by the Congress for Racial Equality (CORE), in which activists of different races rode buses across the South to challenge a recent Supreme Court ruling outlawing segregation in interstate bus travel.

The gruesome killing of Emmett Till, a young Black child, in 1955 after he allegedly whistled at a white woman in a Mississippi store also inspired the Greensboro Four, as they came to be called, to take action.

Blair, Richmond, McCain, and McNeil carefully planned their protest and solicited the aid of Ralph Johns, a local white businessman, to carry it out.

On February 1, 1960, the four students sat down at the Woolworth’s lunch counter in downtown Greensboro, where it was against the law for anybody but white people to be served. The four young lads were refused service but wouldn’t give up their seats.

Police arrived on the scene but were unable to take action due to the lack of provocation. By that time, Johns had already alerted the local media, who had arrived in full force to cover the events on television. The Greensboro Four stayed put until the store closed, then returned the next day with more students from local colleges.

Around 300 students had joined the demonstration at Woolworth’s by February 5, which had shut down the lunch counter and other nearby businesses. Young Black and white people joined in different forms of peaceful protest against segregation in libraries, beaches, hotels, and other establishments as a result of extensive television coverage of the Greensboro sit-ins, which quickly spread to college towns throughout the South and into the North.

Some of the first sit-ins during the civil rights movement were organized by history teacher Clara Luper and the NAACP Youth Council in Oklahoma City in 1958. By the end of March 1960, the movement had spread to 55 cities in 13 states. Though many were arrested for trespassing, disorderly conduct or disturbing the peace, national media coverage of the sit-ins brought increasing attention to the civil rights movement.

By the summer of 1960, dining establishments all throughout the South were becoming integrated in reaction to the sit-in movement’s success. The Greensboro Woolworth’s secretly integrated their lunch counter towards the end of July, when many local college students were on vacation. The first four people to receive service were four Black Woolworth’s employees: Geneva Tisdale, Susie Morrison, Anetha Jones, and Charles Best.

The Student Nonviolent Coordinating Committee (SNCC) was established in Raleigh, North Carolina, in April 1960 to take advantage of the sit-in movement’s momentum.
The SNCC became one of the key players in the civil rights movement over the ensuing years, planning the historic March on Washington in 1963, where Martin Luther King Jr. participated, as well as Freedom Rides through the South in 1961.

In order to get the Civil Rights Act of 1964 passed, SNCC collaborated with the National Association for the Advancement of Colored People (NAACP). Later, SNCC would organize resistance against the Vietnam War.

However, as its members were subjected to more violence, SNCC turned more militant, and by the late 1960s, it was supporting the “Black Power” ideology of Stokely Carmichael, who served as the organization’s chairman from 1966 to 1967, and H. Rap Brown, who succeeded him. Early in the 1970s, the SNCC virtually collapsed after losing a large portion of its mainstream support.

The Impact of the Greensboro Sit-In

The Greensboro Sit-In was a critical turning point in Black history and American history, bringing the fight for civil rights to the national stage. Its use of nonviolence inspired the Freedom Riders and others to take up the cause of integration in the South, furthering the cause of equal rights in the United States.