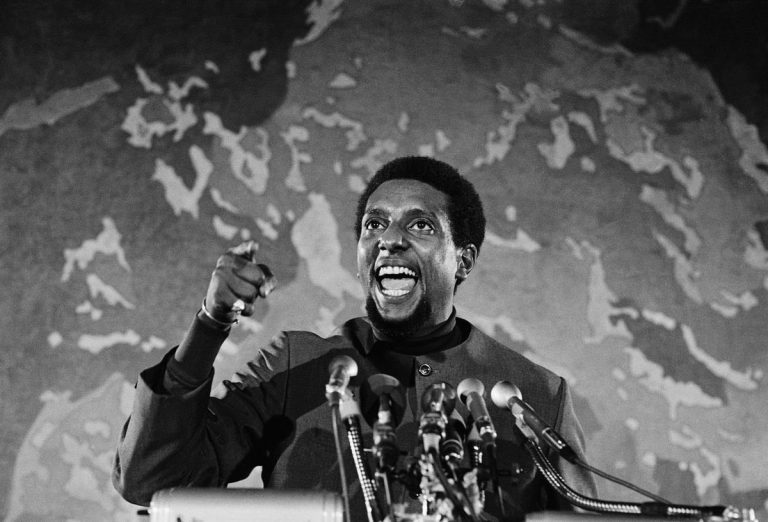 “Racism is not a question of attitude; it’s a question of power.”- Kwame Ture. Kwame Ture was born as Stokely Standiford Churchill Carmichael in Port of Spain, Trinidad, on June 29, 1941.

Kwame Ture became a well-known name in the United States during the 1960s when after enrolling at Howard University in Washington, D.C., he decided to join the freedom rider efforts to integrate the southern portion of the United States.

Kwame was arrested 26 times as a member of the Student Nonviolent Coordinating Committee, SNCC (pronounced SNICK), between 1964 and 1966 for his work to register Afrikans in Mississippi, Alabama, and Georgia to vote. Kwame defeated former US Congressman John Lewis to become Chairperson of the SNCC in June 1966.

Stokely Carmichael was born in Trinidad and spent his first 11 years of life there. He grew up in the house his father built for his mother to honor their marriage.

In his autobiography, Ready For Revolution, he refers to this house by its famous name, “the house at forty-two steps” because it was built at the bottom of forty-two large cement steps built by the government to assist residents in navigating a steep incline.

He lived there with his two sisters, Umilta and Lynette, and their aunts Elaine, Olga, and Louise; their cousin, Austin (Elaine’s son), and their grandmother Cecilia Harris.

Living with his aunts and grandmother for the majority of his childhood had a profound impact on Stokely, and he attributes his upbringing to women.

Kwame, his sisters, and his aunt “Mummy” Olga left Trinidad in June 1952, six months after his grandmother Cecilia died on January 16, 1952, to join his parents and two younger sisters (who were born in the US).

When Stokely moved to the United States, he thought America would be “the land of opportunity,” where everyone could achieve the “American Dream.” He was thrilled at the prospect of attending an American school and competing against American students once more. He describes how he felt on his first day of school at P.S. 39 on Longwood Avenue in his autobiography.

Kwame’s election as SNCC Chairperson signaled the growing militancy within SNCC, and the movement, as well as a desire on the part of many members to take a more militant and uncompromising stance on Afrikan liberation.

Kwame became known as the person who popularized the phrase “Black Power” during the summer of 1966, when he articulated that demand in Greenwood, Mississippi, during the great Civil Rights march of that summer.

It should be noted that, while Kwame is credited with coining the phrase, it has a long history dating back to the 1700s and the movement and writings of Martin Delaney. Kwame helped the SNCC develop into one of the most militant Afrikan organizations in the United States during his tenure as Chairperson.

While still Chairperson of the SNCC and during the height of the US imperialist war against Vietnam in 1967, Kwame had the benefit of going to Vietnam and visiting the Great Nguyen Al Thouc (Ho Chi Minh), the leader of the Vietnamese war resistance against American imperialism.

Kwame moved to Guinea in 1968 and began living and studying under Sekou Ture and Kwame Nkrumah, Ghana’s first president who was overthrown in a central intelligence agency-organized coup in 1966. Following the coup in Ghana, Sekou Ture invited Nkrumah to come to Guinea and serve as Co-President.

Guinea was struggling at the time to build the Democratic Party of Guinea (PDG) as a mass, Pan-Afrikanist political party that would serve as a base within West Afrika from which to launch the Pan-Afrikan struggle to unite Afrika under a single continental, socialist government.

From 1968 to 1998, Kwame worked tirelessly to establish the All African People’s Revolutionary Party (A-APRP), the revolutionary Pan-Afrikanist political party that Nkrumah discussed in his handbook as the logical vehicle for bringing unity and socialism to Afrika.

He died of prostate cancer in 1998 at the age of 57 in Conakry, Guinea, after two years of treatment at the Columbia-Presbyterian Medical Center in New York. He claimed that “forces of American imperialism and others who conspired with them” gave him cancer.

He claimed that the FBI planted cancer in his body as part of an assassination plot. Following his diagnosis in 1996, benefits were held in Denver, New York, Atlanta, and Washington, D.C. to assist with his medical expenses, and the government of Trinidad and Tobago awarded him a $1,000 monthly grant for the same purpose.

Stokely Carmichael was tracked by the CIA as part of their surveillance of black activists abroad, which began in 1968 and continued for years, according to previously secret CIA documents published in 2007.

Stokely Carmichael is credited with coining the term “institutional racism,” which is defined as racism that occurs through institutions such as public bodies and corporations, including universities. Carmichael defined “institutional racism” in the late 1960s as “the collective failure of an organization to provide an appropriate and professional service to people based on their color, culture, or ethnic origin.”

Molefi Kete Asante, a scholar, named Stokely Carmichael to his list of the 100 Greatest Afrikan Americans in 2002.