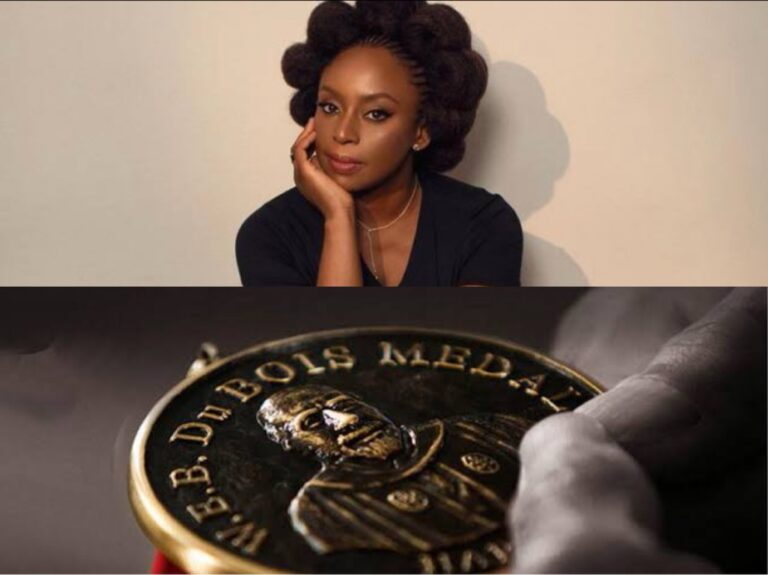 On October 6, 2022, award-winning Nigerian author Chimamanda Ngozi Adichie will receive the W.E.B. Du Bois Medal from Harvard University. Chimamanda, who previously served as a Harvard Radcliffe Institute Fellow (2011-2012) and was the 2018 Harvard College Class Day Speaker, is making another trip back to Harvard.

Chimamanda Adichie will receive the medal along with six other honorees, according to a Hutchins Center for African and African American Research announcement published in The Harvard Gazette, because they “embodi[y] the values of commitment and resolve that are fundamental to the Black experience in America.” Other honorees include pioneering actress Laverne Cox and basketball star, cultural critic, and activist Kareem Abdul-Jabbar.

“Unyielding commitment to pushing the boundaries of representation and creating opportunities for advancement and participation for people who have been too often shut out from the great promise of our times.”

For her writing, which has been acclaimed all over the world and translated into more than thirty languages, Chimamanda Adichie has garnered countless honors and accolades.

She fills a special role that combines several qualities. In its 2017 “Greats” issue, The New York Times T Magazine referred to her as “one of those rarest of people: a celebrated novelist who has also become a leading public intellectual.”

Chimamanda Adichie is a prominent figure in both fashion and beauty who constantly champions Nigerian designers, particularly through her “Wear Nigerian” campaign. She was chosen as the spokesperson for the cosmetics company Boots No7, and she has been highlighted in a number of style publications, such as Vanity Fair’s “International Best-Dressed List,” the covers of British Vogue and Marie Claire Brazil, among others.

Barack Obama called her “one of the world’s great contemporary writers”; and Hillary Clinton has written that “she has the rare ability to sum up even the biggest societal problems swiftly and incisively”.

The W.E.B. Du Bois Medal is the highest honour given by Harvard University in the field of African and African American studies. Past recipients include Oprah Winfrey, Maya Angelou, Muhammad Ali, Steven Spielberg, Ava Duvernay, and Chinua Achebe.