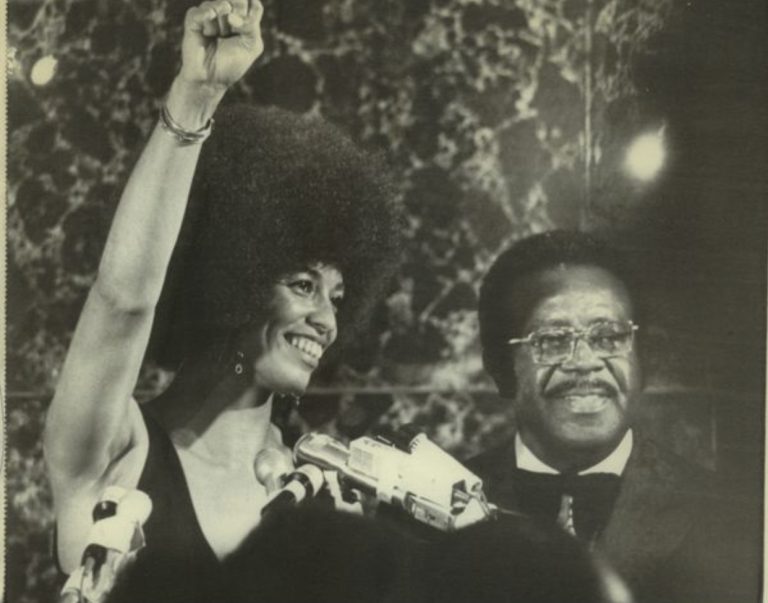 Born Angela Yvonne Davis on the 26th January 1944 in Birmingham United States,  Angela Davis is a militant American black activist who gained an international reputation during her imprisonment and trial on conspiracy charges in 1970–72.

Angela is the daughter of Alabama schoolteachers, and she studied at home and abroad in 1961–67 before becoming a doctoral candidate at the University of California, San Diego, under the Marxist professor Herbert Marcuse.

Because of Angela’s political opinions and despite an excellent record as an instructor at the university’s Los Angeles campus—the California Board of Regents in 1970 refused to renew her appointment as lecturer in philosophy.
She had emerged as a prominent counterculture activist in the 1960s while working with the Communist Party USA, of which she was a member until 1991. Angela was also involved in the Black Panther Party during the Civil Rights Movement. She additionally co-founded Critical Resistance, an organization working to abolish the prison–industrial complex.

However, in 1991 Angela Davis became a professor in the field of the history of consciousness at the University of California, Santa Cruz. And amid much controversy in 1995, she was appointed a presidential chair and became professor emerita in 2008.

The Trials of Angela Davis

Angela Davis was arrested in October 1970 after a warrant for her arrest was issued on the charges of aggravated kidnapping and first-degree murder in the death of Judge Harold Haley.

She was arrested in New York City in connection with a shootout that occurred on the 7th of 1970 in a courthouse in San Rafael, California. Angela Davis was accused of aiding and abetting by supplying weapons to Jonathan Jackson, the man who had burst into the courtroom in a bid to free inmates on trial and take hostages whom he hoped to exchange for his brother George, a black radical who was imprisoned at San Quentin Prison.

However, in the subsequent shoot-out with police, Jonathan Jackson was killed along with Superior Court Judge Harold Haley and two inmates. Angela Davis became a suspect because she was a known supporter of the Soledad Brothers, and the three inmates who were on trial that day for killing a prison guard at Soledad Prison.

According to the laws of California, all persons concerned in the commission of a crime, whether they directly commit the act constituting the offence or not, are principals in the crime. And as such, Angela Davis who had purchased several of the firearms Jackson used in the attack including—the shotgun used to shoot Judge Haley, which she had bought at a San Francisco pawn shop two days before the incident. She was also found to have been corresponding with one of the inmates involved.

Before Angela’s arrest in 1970, she  fled California. The Federal Bureau of Investigation then listed her on the FBI’s Ten Most Wanted Fugitive List.  She was the third woman to be listed. President Richard Nixon also labelled her a “dangerous terrorist” for her involvement with the case.

The trial of Angela Davis began in March 1972 and it drew a lot of international attention because of the weakness of the prosecution’s case and obvious political nature of the proceedings.

Leo Branton Jr. was Angela Davis’ trial lawyer. He hired psychologists to help the defense determine who in the jury pool might favour their arguments. This technique used by Leo  has since become a more common legal technique. He also hired experts to discredit the reliability of eyewitness accounts.

While in prison, Angela Davis was segregated from other prisoners, and was placed in solitary confinement at the Women’s Detention Center. However, with the help of her legal team, she obtained a federal court order to get out of the segregated area.

Angela Davis was released on bail from county jail 16 months after her imprisonment.  Her bail charge of $100,000 was paid by Rodger McAfee, a dairy farmer from Fresno, California, with the help of Steve Sparacino, a wealthy business owner. The United Presbyterian Church also covered some of her legal defense expenses.

Furthermore, thousands of people also organized a movement to gain Davis’ release throughout the United States. By February 1971, more than 200 local committees in the United States and 67 in foreign countries worked to free Angela Davis from prison. John Lennon and Yoko Ono a peace activism couple contributed to this campaign with the song titled Angela.

The trial of Angela Davis was moved to Santa Clara County after Davis’ legal team won another motion for a change of venue.

After 13 hours of deliberations, On June 4, 1972, the all-white jury returned a verdict of not guilty. According to the jury, the fact that she owned the guns used in the crime was judged insufficient to establish her role in the plot.

Hence, after spending 16 months in prison and 4 months of trial proceedings, an all-white jury acquitted Angela Davis of all the charges on June 4, 1972.

Angela Davis continues her activism in her various ways till date—here are some popular quotes from her.

“I think the importance of doing activist work is precisely because it allows you to give back and to consider yourself not as a single individual who may have achieved whatever but to be a part of an ongoing.

“There is an unbroken line of police violence in the United States that takes us all the way back to the days of slavery, the aftermath of slavery, the development of the Ku Klux Klan. There is so much history of this racist violence that simply to bring one person to justice is not going to disturb the whole racist edifice.”

“No march, movement, or agenda that defines manhood in the narrowest terms and seeks to make women lesser partners in this quest for equality can be considered a positive step.”

“Racism, in the first place, is a weapon used by the wealthy to increase the profits they bring in by paying Black workers less for their work.”

“Racism cannot be separated from capitalism.”

“Imprisonment has become the response of first resort to far too many of our social problems.”

“When children attend schools that place a greater value on discipline and security than on knowledge and intellectual development, they are attending prep schools for prison.”

“I believe profoundly in the possibilities of democracy, but democracy needs to be emancipated from capitalism. As long as we inhabit a capitalist democracy, a future of racial equality, gender equality, economic equality will elude us.”

“As a black woman, my politics and political affiliation are bound up with and flow from participation in my people’s struggle for liberation, and with the fight of oppressed people all over the world against American imperialism.”

“Revolution is a serious thing, the most serious thing about a revolutionarys life. When one commits oneself to the struggle, it must be for a lifetime.”

“The idea of freedom is inspiring. But what does it mean? If you are free in a political sense but have no food, what’s that? The freedom to starve?”

“The food we eat masks so much cruelty. The fact that we can sit down and eat a piece of chicken without thinking about the horrendous conditions under which chickens are industrially bred in this country is a sign of the dangers of capitalism, how capitalism has colonized our minds. The fact that we look no further than the commodity itself, the fact that we refuse to understand the relationships that underly the commodities that we use on a daily basis. And so food is like that.”

“Jails and prisons are designed to break human beings, to convert the population into specimens in a zoo – obedient to our keepers, but dangerous to each other.”

“When someone asks me about violence, I just find it incredible, because what it means is that the person whoâ€™s asking that question has absolutely no idea what black people have gone through, what black people have experienced in this country, since the time the first black person was kidnapped from the shores of Africa.”