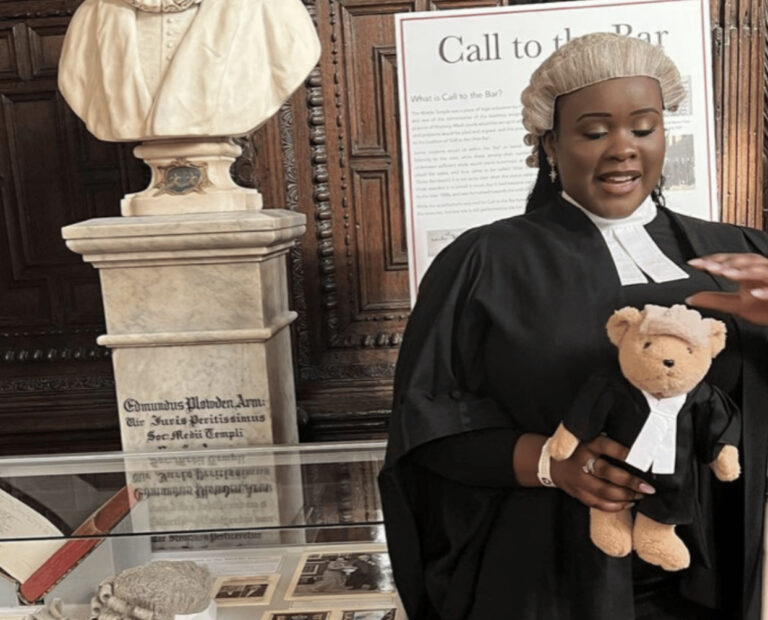 Jessikah Inaba has made history by becoming the first blind, black female attorney in the UK.  At just twenty-three, Inaba announced she had qualified for the Bar on October 16, marking the occasion on Instagram with the caption: “Officially, your very own barrister at your service.”

Jessikah Inaba spent five years studying law at the University of Law Bloomsbury in central London. She used lecture notes and handwritten notes from professors and friends who read aloud to her to create her own Braille materials.

She was also the first black and blind student at the university.

The UK’s main legal organisations, including the Bar Council, and the Bar Standards Board, confirmed Inaba as the first ever blind and black female barrister.

In an interview with The Times UK, Jessikah Inaba said she hopes her trailblazing achievement will pave the way for more people from diverse backgrounds.

“I know I can do this job well, and the more people like me who go through training the easier it will become,” she said. “I know I’m giving hope to others in similar situations.”

“There’s a triple-glazed glass ceiling. I’m not the most common gender or colour, and I have a disability, but by pushing through, I’m easing the burden on the next person like me.”

“It’s been crazy – I still can’t really believe I’ve done it,” she continued. “One day I’ll wake up and realise how amazing this is.”

“It was hard and I often thought of giving up, but my supportive family gave me courage and strength. I always believed in myself from the start – there’s nothing about me which means this isn’t possible.”

Jessikah Inaba was born with a condition

Jessikah Inaba was born with Bilateral microphthalmia, an eye condition which renders babies with smaller than average eyes.

After spending her early years in Lewisham, she relocated to Camden with her family before attending mainstream schools in Surrey where education programs for visually impaired students were available.

In October 2019, she was hospitalised after successive bouts of fainting. She told the Times UK she was operating on three hours sleep each night for over two years.

“I would sometimes get 45 minutes a day to eat, but often I ate while at my computer,” she explained. “I was spending more time preparing my own learning materials than I was studying.”

“The university had other visually impaired people who used text to speech, but I just can’t work like that. I need to read it physically for myself or I can’t remember it. Everyone is different and has a different work around for various situations.”

“A lot of people registered blind have some vision, so they can sometimes use large print, or some blind people manage well just by listening to text. Braille is expensive to produce because you need a lot of special software and equipment.”

Jessikah Inaba graduated from a Master of Laws last November. In court, she uses a hand-held Braille keyboard to read and edit documents by hand, enabling her to listen to proceedings.

According to a report from The Bar Council in 2021, less than five per cent of barristers in the UK are black. The report also found that aspiring barristers from ethnic minority backgrounds find it harder to secure apprenticeships compared to their similarly qualified “White British peers”, and that white male barristers earned the highest fee income, women earned less than men, and Black women earned the least.

Treasurer of the Honourable Society of the Middle Temple, Justice McGowan, said Inaba’s “commitment and tenacity…demonstrate that she will be a great success.”

Inaba plans to apply for pupillage next January — an apprenticeship where new barristers receive their first placement in chambers.