No Charges, After A Black Woman Called Authorities After Her Neighbor Hung A KKK Flag In Their Window 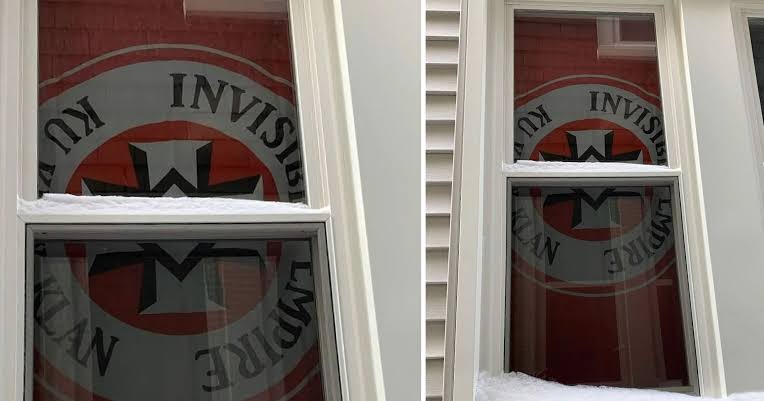 A 57 year old Black woman, Je Donna Dinges, said her neighbor put up a racist KKK flag on their window facing her home; according to local news.

Donna is resident in Grosse Pointe Park, Michigan; where she has lived for over a decade, Detroit Free Press reported. The newspaper reported that Dinges’ ex-husband saw the flag as he took out the garbage on Monday.

After failed attempts to get help from federal authorities and the Michigan Attorney General Office over concerns about the KKK flag; Dinges’s friend reached out to a local news station, WDIV-TV, the Detroit Free Press reported.

Dinges told the Detroit Free Press that police immediately arrived at the neighbor’s home in; “less than an hour” after a reporter from the station reached out to city officials.

Why They Put Up The KKk Flag

“Detectives who came out from the Grosse Pointe Park Police Department told me that the reason the neighbors put the klan sign up; was because I put a camera on my windowsill to record what was happening along the side of my house to protect myself,” she told FOX 2.

According to the report, the neighbors told police that they didn’t approach Dinges about the camera because; they’re “non-confrontational people,” Dinges told Detroit Free Press.

As the Detroit Free Press reported, the neighbors removed the flag from their window. According to the report, the incident did spark a wave of responses from the city, local NAACP chapter, and Senator Adam Hollier.

“The fact that a KKK flag was displayed at all is deeply disturbing. Grosse Pointe Park is arguably the most diverse city in the five Grosse Pointes and yet; someone felt comfortable enough to wave their racism in their neighbors face with the oldest symbol of; white, domestic terrorism perpetrated on Black Americans for over a hundred years,” NAACP Grosse Pointes & Harper Woods said in a statement.

Information about this incident was sent to the Wayne County Prosecutor’s Office, Detroit Free Press reported.

Earlier this week, Dinges told city officials why she reached out to the news station rather than the police.

She continued; “If Black and Brown people felt safe with the police, being spoken to by the police; being dealt with by the police and calling the police, we would call you. I didn’t call you because I didn’t think you cared.”