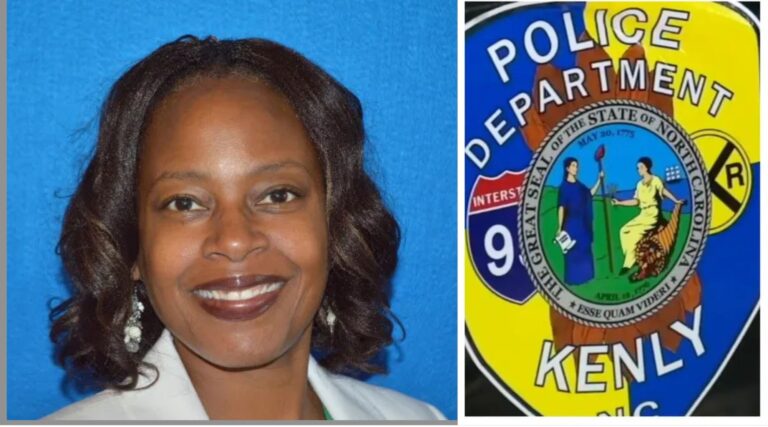 After Justine Jones, a Black woman, and the new North Carolina town manager was hired, the entire police department resigned; claiming they resigned because the workplace was “toxic” and “hostile.”

While it’s unclear whether race played a role in their resignation, the employees who left were all white, whereas Jones is black.

Jones has worked in local government for 16 years across multiple states including Minnesota, Virginia, and South Carolina, according to the report. She was chosen as the town manager of Kenly, North Carolina, after a “nationwide” search of 30 candidates.

Kenly is 36％ Black, 20％ Hispanic, and 36％ white, according to town demographics. Within two months of Jone’s arrival, the chief of police, four full-time officers, and two town clerks resigned. Some of their letters were aimed at her.

According to Yahoo News, in a resignation letter addressed to Jones, North Carolina Police Chief Josh Gibson stated that he was pleased with the progress his department had made over the previous three years, but that the “hostile” work environment created by Jones made it impossible for progress to continue. Gibson, a 21-year police veteran, has declined to comment on the alleged details, citing legal concerns, but has stated that if Jones is fired, he would consider returning to work.

On his personal social media page, he reiterated these sentiments.

“I have put in my 2 weeks notice along with the whole police dept.,” Gibson wrote on Facebook last Wednesday. “The new manager has created an environment I do not feel we can perform our duties and services to the community.”

The two town clerks and other officers cited “toxic,” “hostile,” and stressful work conditions in their resignation letters, which WRAL obtained. No department employees elaborated on the alleged working conditions.

The resignations elicited a range of reactions, all of which were shared at a Town Hall meeting. Residents such as Christel McGowen believe the Town Council should back the officers and fire Jones.

“They’ve been here for more than 20 years.” “This woman walks in, and I want to say a lot, but I can’t,” McGowan told the News & Observer. “She sued Virginia and South Carolina, and I wouldn’t be surprised if she sues us.” Jones had previously sued those states for racial discrimination, according to the report.

Residents like Cynthia Kirby, on the other hand, believe the resignation was motivated by racial tensions. “They don’t want to be led by anybody Black; that’s Kenly. They’re always harassing Black people. It’s racial,” Kirby told News & Observer. “I hope this doesn’t end in her quitting because that’s not right. You can’t judge anybody because they make you do your job.”

Justine Jones has not spoken to the media about the resignations.