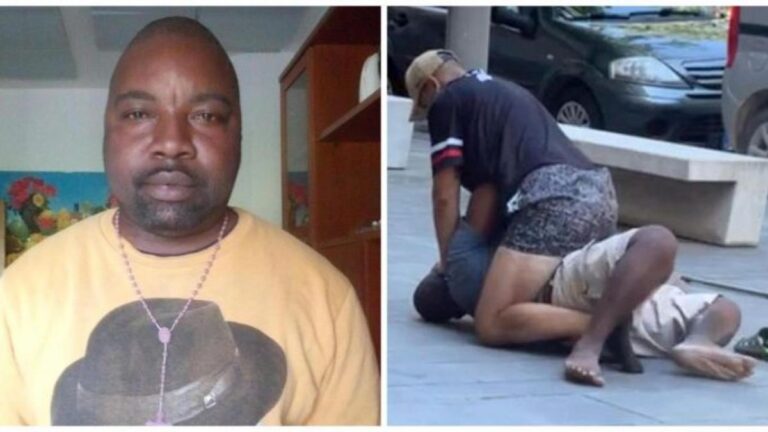 An Italian man was arrested by Italian Policemen in the killing of a Nigerian street vendor, whose brutal beating death on a busy beach town thoroughfare was filmed by onlookers with no obvious attempt to intervene physically.

Video footage of the fatal attack on a Nigerian man has gone viral on Italian news websites and social media, provoking outrage as Italy enters a parliamentary election campaign in which the right-wing coalition has already made immigration a point of contention.

“The murder of Alika Ogorchukwu is dismaying,’’ Enrico Letta, a former premier, and the head of the left-wing Democratic Party wrote Saturday on Twitter, naming the Nigerian vendor who died Friday. “Unheard of ferocity. Widespread indifference. There can be no justification.”

Right-wing leader Matteo Salvini, who has made security a campaign theme, also expressed outrage over the death, saying that “security has no color and  needs to return to being a right.”

According to police, Nigerian, Alika Ogorchukwu, 39, was selling goods on the main street of Civitanova Marche, a beach town on the Adriatic Sea, on Friday when his attacker grabbed the vendor’s crutch and struck him down. The attacker is seen on video wrestling the victim onto his back on the pavement as he fought back, eventually subduing Ogorchukwu with his body weight.

“The aggressor went after the victim, first hitting him with a crutch. He made him fall to the ground, then he finished, causing the death, striking repeatedly with his bare hands,” police investigator Matteo Luconi said at a press conference.

He later told Sky TG24, an Italian news channel, that onlookers called police, who responded after the suspect had fled and attempted to administer aid to the victim. An autopsy will determine whether the death was caused by blows, suffocation, or some other factor.

Police used surveillance cameras to track the assailant’s movements and apprehended a man identified as Filippo Claudio Giuseppe Ferlazzo, 32. He was being held on suspicion of murder and theft charges for allegedly stealing the victim’s phone.

According to Matteo Luconi, the assailant lashed out after the Nigerian vendor made “insistent” requests for pocket change. Police were questioning witnesses and watching surveillance footage of the attack. According to the police, the suspect has not made any statements.

Ogorchukwu, who was married with two children, resorted to street selling after being hit by a car and losing his job as a laborer as a result of his injuries, said Daniel Amanza, who runs the ACSIM association for immigrants in the Marche region’s Macerata province.

Amanza gave a different version of what happened, saying the attacker became enraged when Ogorchukwu told the man’s companion she was beautiful.

Amanza told The Associated Press, “This compliment killed him.”

“The tragic fact is that there were many people nearby. They filmed, saying ‘Stop,’ but no one moved to separate them,’’ Amanza said.

Macerata was the location of a 2018 shooting spree targeting African immigrants that injured six people. Luca Traini, 31, was sentenced to 12 years in prison for the shootings, which were classified as a hate crime by Italy’s highest court.

Fabrizio Ciarapica, mayor of Civitanova Marche, met with members of the Nigerian community after hundreds demonstrated on Saturday.

“My condemnation is not only for the crime but it is also for the indifference,” Ciarapica told Sky. ”This is something that has shocked citizens.”

“I am horrified by this electoral climate,″ he said on social media. ”A father was killed in an atrocious and racist way while passersby took video without stopping the aggressor. And instead of reflecting on what we are becoming, politicians argue and instrumentalize.”