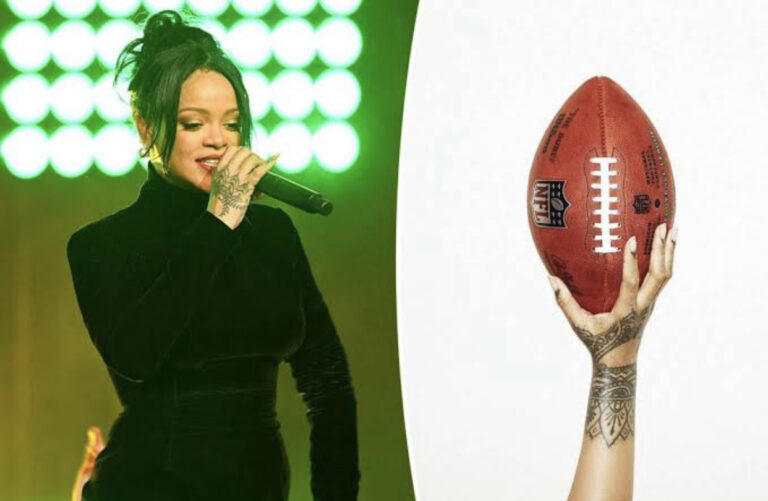 Rihanna has been confirmed as the headliner of the 2023 Super Bowl Halftime Show, which is slated to take place on February 12, 2023.

The Barbadian National Hero, celebrated the announcement by posting a photo of an NFL football on Twitter

The Halftime Show is now sponsored by Apple Music, and will be produced, once again with the help of Jay-Z’s entertainment agency Roc Nation.

Commenting on the announcement, Jay-Z says: “Rihanna is a generational talent, a woman of humble beginnings who has surpassed expectations at every turn. A person born on the small island of Barbados who became one of the most prominent artists ever. Self-made in business and entertainment.”

Riri was previously offered the Super Bowl in 2019, but turned down the chance to perform in solidarity with former San Francisco 49ers quarterback Colin Kaepernick, who was in dispute with the NFL following his decision to kneel during the pre-game national anthem.

The Super Bowl gig seems likely to coincide with a wider musical comeback for Rihanna, who hasn’t released a new album since 2016’s Anti. If recent halftime shows are anything to go by, we can expect guest stars and a medley of hits during the 15-minute spectacle.

Falling in line with their headliner, the NFL changed their Instagram and Twitter bios to highlight Rihanna—her last name and beauty empire’s name.

The marketing team tapped in and switched out one of the words in its licensed acronym (NFL). And that’s how Football became Fenty. The NFL’s head of music, Seth Dudowsky, also shared the league’s excitement in a statement.

“We are thrilled to welcome Rihanna to the Apple Music Super Bowl Halftime Show stage. Rihanna is a once-in-a-generation artist who has been a cultural force throughout her career,” Seth said. “We look forward to collaborating with Rihanna, Roc Nation, and Apple Music to bring fans another historic Halftime Show performance.”