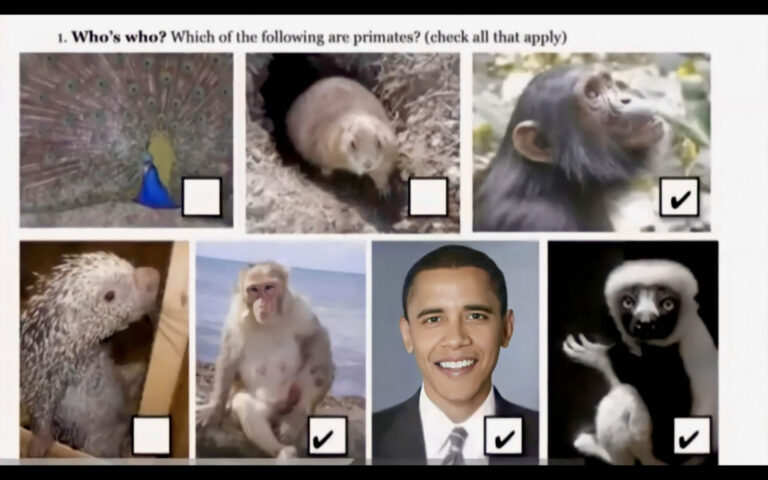 At the Roeper School, a private gifted school in Birmingham, Michigan, a teacher has been placed on leave for assigning her students a worksheet that depicted the former President of the United States, Barack Obama next to monkeys, with the question,  “Which of the following are Primates?”

Due to online threats, classes were canceled on Thursday and police patrolled the campus perimeter, Detroit’s WDIV reported. Carolyn Lett, Director of diversity for the Detroit suburb school said, “When I saw it I couldn’t believe it.” “It is something that the teacher did. You Know, purposefully put this picture in along with the animals and the apes and the primates. I’m trying to understand this myself. But right away I had a reaction, like, It’s so wrong I can’t understand it.

The assignment which was given on May 11, hurt students and enraged parents. And the Images prompted a letter from parents the next day. School officials were also baffled as to what the teacher had in mind while putting the picture of the United States’ first Black president alongside primates. According to the teacher, she wasn’t aware of how sensitive the offense was.

On Friday, the Roeper School released a statement saying, “On behalf of Roeper School’s leadership, we want to acknowledge the disturbing racial offense contained in an assignment with an upper school class last week.”

“The choice to use this piece of curriculum was completely inconsistent with our School’s philosophy and mission and we sincerely apologize for its use and the harm it has caused. While the teacher has taken responsibility and admits the mistake of not properly vetting the resource, we know that is not enough and she has been placed on administrative leave until further notice.”

According to Detroit News, a total of 30 students received the racist assignment which was part of an “Apes, monkeys, and lemurs, an introduction to primates” biology class. And the class was originally from a Duke University curriculum.

In conclusion, the Roeper School has offered counseling services to the students who were affected by the racist assignment.