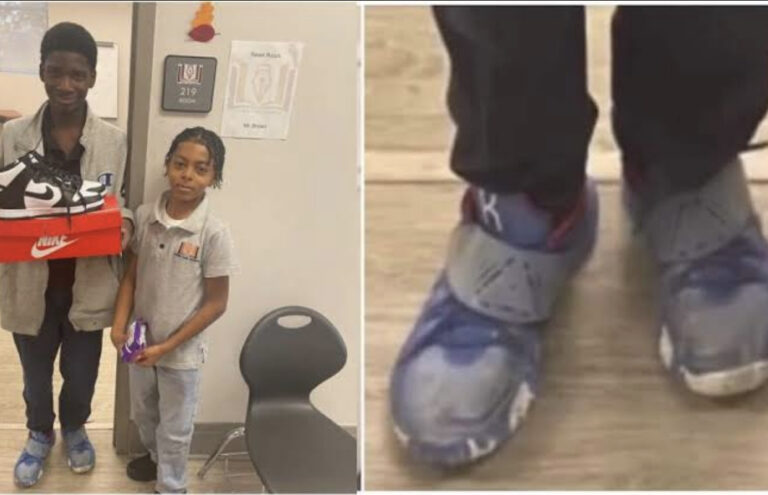 When Melvin, his classmate and best friend, was being teased because of his worn-out shoes, Romello Early, a seventh-grader at Buffalo Creek Academy in Buffalo, New York, decided to buy new shoes for him. As a result, Melvin’s story went viral.

Romello was furious when he realized that Melvin had been tormented because his shoes were tearing. One day, according to his mother, he even contacted her sobbing from school over the mistreatment of his friend.

“I could tell it was upsetting him. It just put a real bad ache in my stomach to see somebody have to go through that, and to be to be picked on just based off appearance,” Romello told WGRZ.

Romello was willing to sacrifice his Christmas gift

Romello decided he had to do something for his friend. He asked his mother to take him to the shoe store to buy a new pair of shoes for Melvin using the allowance money he had saved up. He said he was also willing to sacrifice one of his Christmas gifts for it.

The next day, Romello was so excited to surprise Melvin that he woke up extra early to give him the shoes.

But Romello said he doesn’t need anything in return since it was a gift from him.

Meanwhile, Bryant Brown Jr., the Dean of Culture at Buffalo Creek Academy, learned about what happened and called them to the classroom. Touched by the act of kindness, Brown took a picture of the two and posted it on Facebook upon getting permission from the two boys’ parents.

“My student Melo told me he was tired of other students picking on Melvin about his shoes. Melo used his allowance and bought Melvin some shoes. This is what I live for, be that helping hand,” Brown wrote in a Facebook post, which has been shared more than 17,000 times.