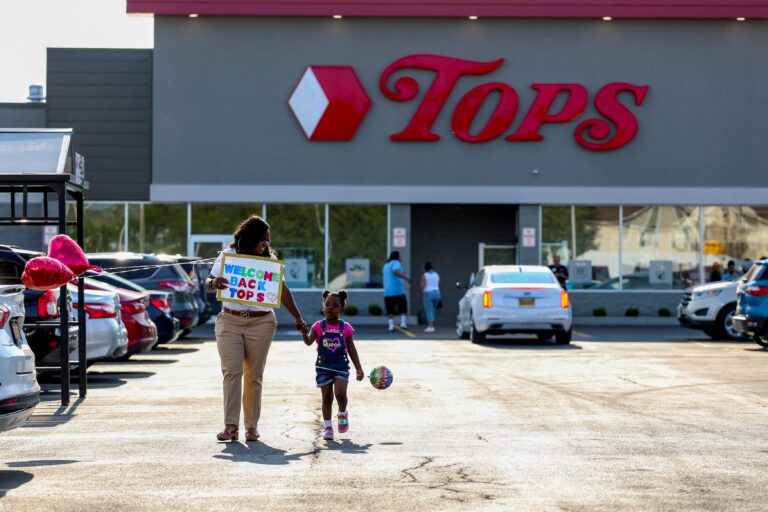 LeCandice Durham and her daughter, Treasure, 4, walk through the parking lot during the reopening of a Tops Friendly Markets on Jefferson Avenue, the site of the killing of 10 people in an attack by an avowed white supremacist, in Buffalo, New York, U.S., July 15, 2022. REUTERS/Lauren Petracca NO RESALES. NO ARCHIVES TPX IMAGES OF THE DAY
Share
Facebook Twitter LinkedIn Pinterest Email

A man from Seattle was arrested after reportedly threatening to kill Black people at a Tops supermarket in Buffalo.

This occurred just days after another Tops location, the one where the racially motivated May massacre took place, reopened to the public.

Joey David George, 37, is accused of calling a Buffalo grocery store several times on July 19 and 20. According to a criminal complaint filed in federal court in Seattle, he referred to himself as “Peter” and inquired about the number of Black people in the store.

In the first phone call, George stated that he would be in the news if he “shot and killed all of the Black people, including all of the women, children, and babies,” in the grocery store. According to the Seattle court documents, he also told an employee that he was close to or inside the location.

George reportedly asked if the store had been evacuated and then stated that if there were no Black people to shoot at the Elmwood store when he arrived, he would instead attack the Tops on Jefferson Avenue, where the May 14 mass shooting occurred.

He reportedly “ranted about a race war,” saying, “This is what happens in a blue state.”

According to Tops spokeswoman Kathleen Sautter, the Elmwood store was eventually closed and evacuated as a result of the threat, and the Buffalo Police Department was notified. “We take every threat seriously, and our team works with local police agencies to assess threats and react accordingly,” she said.

George is also facing charges for reportedly making racial threats at Shari’s Restaurant and Pies in San Bruno, California, where he threatened to shoot all Black and Hispanic customers if the restaurant didn’t close in 20 minutes.

Justice Department officials believe George made threats to a cannabis dispensary in Rockville, Maryland, and a Denny’s in Connecticut in September. In January, he also threatened a dispensary in Seattle.