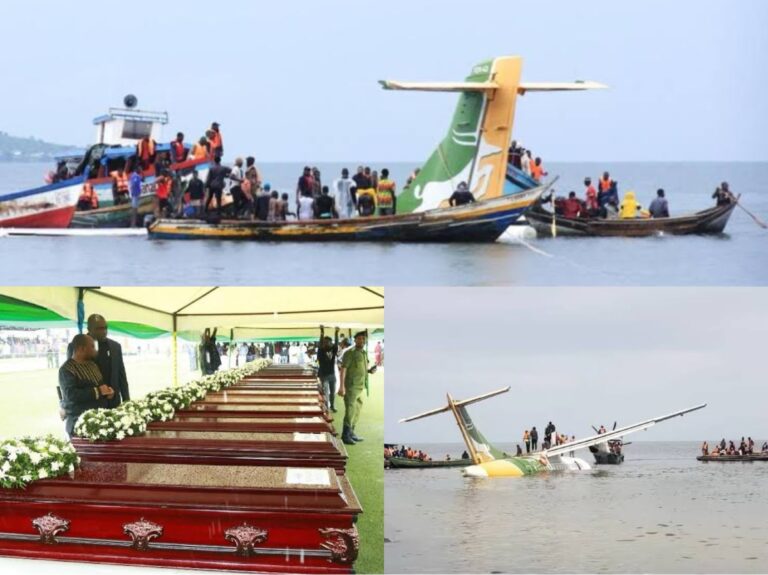 On Sunday, a plane crash occurred in the East African nation of Tanzania, and on Monday, the nation held a special mass funeral for the 19 victims of Sunday’s plane crash in Lake Victoria.

The burial service was attended by Prime Minister Kassim Majaliwa, who confirmed that 26 people were rescued after the Precision Air flight from the coastal city of Dar es Salaam plunged into the water.

“Information on rescue efforts show that the number of people who have been rescued stands at 26. This includes 22 passengers, two flight attendants and two people who (later) lost their lives. The total number of people who have lost their lives is 19, they include 17 passengers and two pilots. However, two locals who were present at the scene of the accident were injured but were rushed to the hospital where they are recuperating. They have been counted among the 26 people who were rescued,” said the PM.

He said two locals who were injured and were recovering in hospital were included in that number.

According to Africanews, Police said the aircraft was flying at about 100 metres (328 feet) when encountered problems and bad weather and crashed.

The company said the aircraft was an ATR 42-500, manufactured by Toulouse-based Franco-Italian firm ATR, and had 39 passengers, including an infant; and four crew members on board.

Video footage broadcast about the plane crash on local media showed the plane largely submerged as rescuers, including fishermen, waded through water to bring people to safety.

Emergency workers attempted to lift the aircraft out of the water using ropes, assisted by cranes as residents also sought to help.

President Samia Suluhu Hassan expressed her condolences to those affected by the accident, saying: “We pray to god to help us.”

The disaster ranks among the deadliest plane crashes in the East African nation’s history.