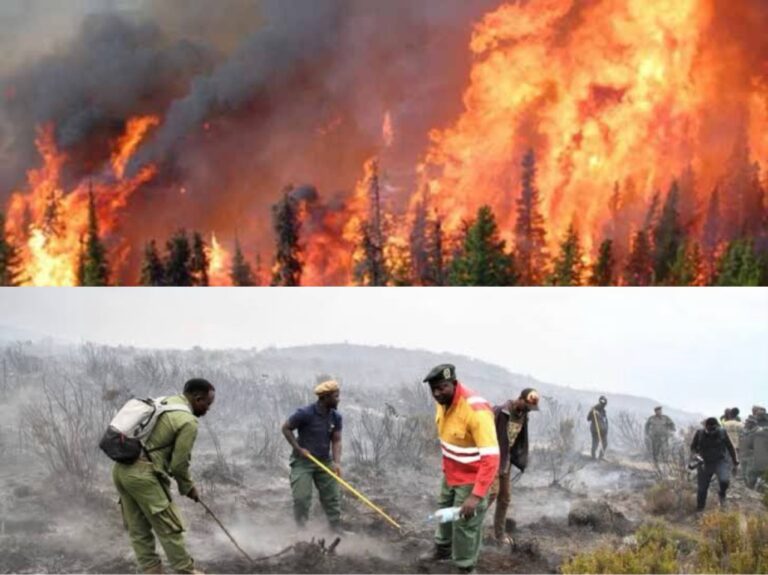 According to local officials, more than 300 people have been enlisted to help put out a fire on the famous Mount Kilimanjaro in Tanzania. Police and local residents are also assisting firefighters.

On the south side of the mountain, at a height of about 4,000 meters, the fire was raging close to the camp Karanga location that climbers use when they ascent the mountain.

Africa’s tallest peak, Mount Kilimanjaro, is 5,895 meters high and is located in the northeast of the nation (19,340 feet).

According to AfricaNews, Officials have not yet established how the fire started, but it comes exactly two years after another blaze, which raged for a week in October 2020 across 95 square kilometres (37 square miles).

No one was killed in that fire and on Saturday officials said that the current blaze did not threaten any of the tourists on the mountain. Kilimanjaro is popular with both trekkers and mountain climbers.

The fire started on Friday evening and was spread by strong winds during the night, said regional officials. They could not yet say how much ground it covered.

A plane transporting local officials and leading members of the Tanzania National Parks Authority (TANAPA) for a visit to evaluate the situation was unable to land on Saturday.

“Large clouds and the smoke prevented us from reaching the fire zone,” the prefect of Kilimanjaro, Nurdin Babu, told journalists. “We will try again when the situation improves.”

The chief of the region’s police, Yahaya Mdogo, said that they were focusing on getting the fire under control and could not yet say how big it was or what impact it was having on the population.

But videos posted on social media appeared to show the flames devouring vegetation and giving off thick clouds of grey smoke.

Police, firefighters, students from the local university and even staff from tour operators were working hard to bring the blaze under control, TANAPA said in a brief statement.

Mount Kilimanjaro, with its snow-capped peak, is known around the world.

The forests surrounding it form part of a national park, and Kilimanjaro National Parks is registered by UNESCO as a World Heritage site, in part because many endangered species live there.