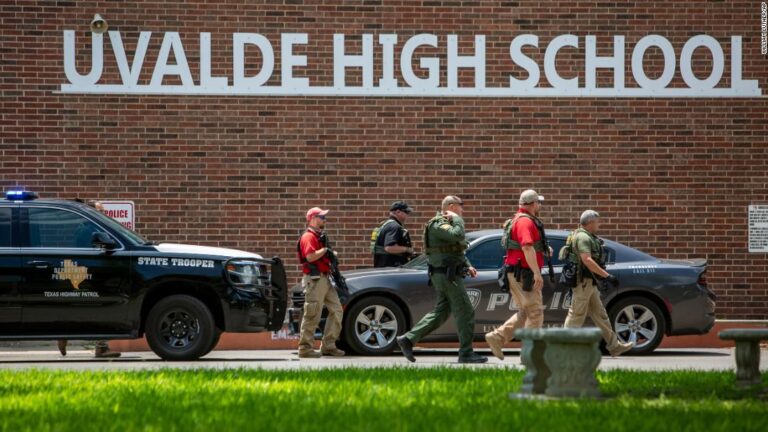 The gruesome act shook the United States, which was still reeling from the mass shooting that happened just 10 days ago. And the attack ended when law enforcement killed the 18-year-old gunman identified as Salvador Ramos.

On Tuesday evening, the gunman shot his grandmother, who was hospitalized and in critical condition, before driving to Robb Elementary to stage the attack. Moments later, police received a 911 call about a vehicle that crashed near the school and someone armed with a rifle heading inside.

According to Lt. Chris Olivarez of the Texas Department of Public Safety, the man was wearing a “tactical vest carrier with no ballistic panels.” Police responded and engaged the shooter before he got into the building, gunfire was exchanged and two officers were shot. The officers are both expected to live, according to Olivarez.

Salvador Ramos then got into the building, barricaded himself inside a classroom, and started shooting at the children and at two teachers. Olivarez spoke of the act as being “completely evil.” With the gunman barricaded, the police couldn’t get to him and according to Olivarez;

“There was not sufficient manpower at that time, and their primary focus was to preserve any further loss of life,” he told CNN. “They started breaking windows around the school and trying to rescue, evacuate children and teachers while that was going on.”

Eventually, a specialized tactical team arrived, forced their way into the classroom, and shot Ramos dead. One officer on the team was shot but is also expected to survive.

So far, two 10-year-olds and a fourth-grade teacher have been named publicly by relatives as among those who died. Parents waited into Tuesday night at a civic center to learn if their children had survived, some also gave DNA samples to authorities to help identify the victims of the mass shooting, according to CNN.

Authorities have identified all the victims, whose bodies have been removed from the school, and notified their families, according to Olivarez. He told CNN that all those killed and injured were in one classroom. Hospitals in the area treated at least 20 injured persons.