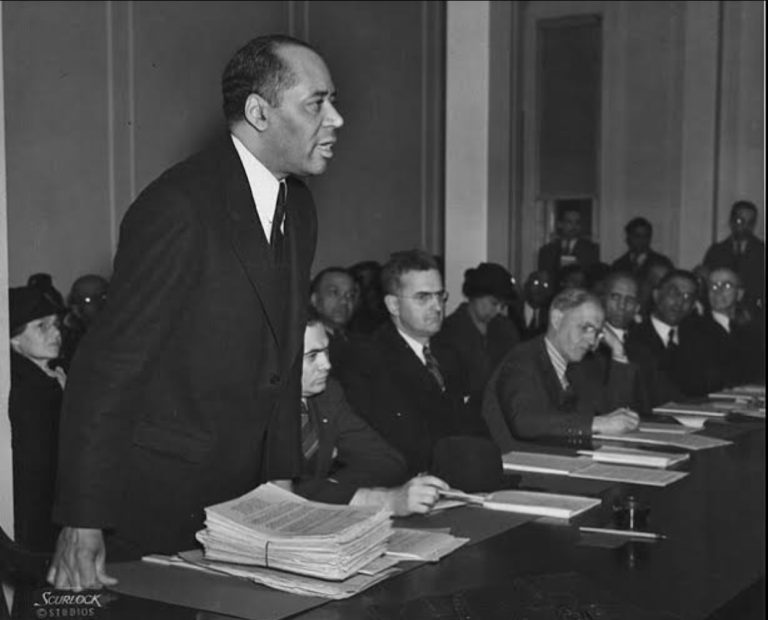 Born on the 3rd of September 1895 in Washington, DC, Charles Hamilton Houston, was an African-American lawyer and educator who was instrumentalin laying the legal groundwork that led to U.S. Supreme Court rulings outlawing racial segregation in public schools.

He was one of the most influential figures in African American life between the two world wars. He was a  scholar and a lawyer, who he dedicated his life to freeing his people from the bonds of racism and segregation. He played a significant role in dismantling the Jim Crow laws, which earned him the title “The Man Who Killed Jim Crow”.

Charles Houston grew up in a middle-class family in Washington, D.C. His father, William Le Pre Houston, was an attorney, and his mother, Mary Hamilton Houston, a seamstress.

Houston completed high school at the age of 15 and graduated as one of six valedictorians from Amherst College in Massachusetts in 1915. He then taught at Howard University in Washington, D.C., for two years until the onset of World War I. when he enlisted in the U.S. Army and served in Europe in World War I as a second lieutenant in field artillery.

As a result of some of his experiences in the segregated and racist army, Charles Hamilton Houston decided that he needed to become an advocate to enforce the legal rights of the oppressed.

In pursuit of this, and following his honorable discharge from the army in 1919, Houston enrolled at Harvard Law School from which he earned his Bachelor of Laws in 1922 and a doctorate in 1923.

Houston was a stellar student and became the first black editor of the Harvard Law Review. He studied law at the University of Madrid until 1924 when he returned to Washington, DC, and joined his father’s law practice.

In 1924, charles also began to teach part time at Howard University School of Law, which was then a part-time night school.

Through that time the University had trained approximately three fourths of the approximately 950 African American lawyers practicing in the United States.

In the next five years, in part at the urging of Houston, the Howard University Trustees recreated HUSL as a full-time day school and in 1929 put Houston in charge (with a title of Resident Vice-Dean, but he had the responsibilities of a dean–Houston was HUSL’s dean in all but title).

During his six year tenure as vice-dean (1929-35), Howard University Law School was training almost a quarter of the nation’s black law students. Charles Hamilton Houston also oversaw the dramatic change which led to HUSL being accredited by the American Bar Association and meeting the standards for being admitted to the the Association of American Law Schools.

Houston further diversified the course offerings and made sure students received more rigorous training for work in the field of civil rights.

It was during this period that Houston set the course for the law school when he wrote:

[The] Negro lawyer must be trained as a social engineer and group interpreter. Due to the Negro’s social and political condition . . . the Negro lawyer must be prepared to anticipate, guide and interpret his group advancement. . . . [Moreover, he must act as] business advisor . . . for the protection of the scattered resources possessed or controlled by the group. . . . He must provide more ways and means for holding within the group the income now flowing through it.

McNeil, Groundwork at 71 (1983), quoting Charles Hamilton Houston, “Personal Observations on the Summary of Studies in Legal Education as Applied to the Howard University School of Law,” (May 28, 1929)

The Legacy Of Charles Hamilton Houston

Houston made several significant contributions in the battle against racial discrimination, by challenging many of the Jim Crow laws. In 1935–40 he served as special counsel for the National Association for the Advancement of Colored People (NAACP), arguing several important civil rightscases before the U.S. Supreme Court. In State ex rel. Gaines v. Canada (1938), Houston argued that it was unconstitutional for Missouri to exclude blacks from the state’s university law school when, under the “separate but equal” provision, no comparable facility for blacks existed within the state.

Charles Hamilton Houston also conceived of and led the legal strategy leading to the end of legalized racial segregation in the United States. With those he taught and mentored, he laid the legal groundwork through; thought and action that ultimately led to 1954 U.S. Supreme Court decision in Brown v. Board of Education that made racial segregation in public primary and secondary schools unconstitutional, four years after his death.

He died four years before full fruition of his work to end “separate but equal” as a valid constitutional principle.

Houston not only participated in effecting the change, but was the inspiration and mentor to Thurgood Marshall, James Nabrit, Spottswood Robinson, A. Leon Higginbotham, Robert Carter, William Hastieamongst many others who carried on the battle and remains an inspiration to those working for social justice today.

The efforts of Charles Hamilton Houston to dismantle the legal theory of “separate but equal” came to fruition after his death, with the historic Brown v. Board of Education (1954) decision, which prohibited segregation in public schools.

Charles Houston’s contributions to the abolition of legal discrimination also went largely unrecognized until after his death. He was however posthumously awarded the NAACP’s Spingarn Medal in 1950. Several public also schools bear his name, just like the main building of the Howard Law School, which was dedicated in 1958 as the Charles Houston Hall. Additionally, a law professorship and several student organizations also honour Houston.

Charles Hamilton Houston is further recognized as the architect behind the ultimate success of the long struggle to end legalized discrimination and, in particular, the “separate but equal” doctrine accepted by the U.S. Supreme Court in 1896 in Plessy v. Ferguson. Houston, together with a select group of mostly Howard lawyers, including; Thurgood Marshall, and working through the NAACP and later the NAACP Legal Defense and Educational Fund, created a number of precedents that ultimately led to the dismantling of de jure discrimination after Brown v. Board of Education in 1954, four years after his death. Among the major steps were Pearson v. Murray (1936) and State ex rel. Gaines v. Canada (1939).

In Pearson, Houston and Thurgood Marshall established in the Maryland highest court that the University of Maryland could not exclude African Americans as it had excluded Marshall just a few years earlier.

In Gaines this principle was extended to the entire country when the U.S. Supreme Court held that Missouri could not exclude blacks from the state law school since there was no comparable, and could be no comparable school for African Americans because of the unique intangibles of a legal education, in Missouri.

Ultimately this precedent was then extended to other schools and ultimately down to public primary and secondary education.

Houston’s importance was recognized by his colleagues, students, and intellectual heirs.

His importance became more broadly known through the success of Thurgood Marshall and after the 1983 publication of Genna Rae McNeil’s Groundwork: Charles Hamilton Houston and the Struggle for Civil Rights (U. of Pa. Press 1983).

“A lawyer’s either a social engineer or he’s a parasite on society.” …

As a social engineer charles was a highly skilled, perceptive, sensitive lawyer who understood the Constitution of the United States and knew how to explore its uses in the solving of “problems of . . . local communities” and in “bettering conditions of the underprivileged citizens.

Charles Hamilton Houston was an inspiring figure in American legal history and a sometimes controversial one as well, he died of a heart attack on April 22, 1950, in Washington, D.C.

“The race problem in the United States is the type of unpleasant problem which we would rather do without but which refuses to be buried.”

“ We beg you to save young prejudice. Do not bind the children within the narrow circles of your own lives”

“The hate and scorn showered on us Negro officers by our fellow Americans convinced me that there was no sense in my dying for a world ruled by them. I made up my mind that if I got through this war I would study law and use my time fighting for men who could not strike back.”

“The race problem in the United States is the type of unpleasant problem which we would rather do without but which refuses to be buried.”

“Law suits mean little unless supported by public opinion. Nobody needs to explain to a Negro the difference between the law in the books and the law in action. … The really baffling problem is how to create the proper kind of public opinion.”

“A lawyer’s either a social engineer or … a parasite on society … A social engineer [is] a highly skilled, perceptive, sensitive lawyer who [understands] the Constitution of the United States and [knows] how to explore its uses in the solving of problems of local communities and in bettering conditions of the underprivileged citizens.”

“Whether elected or appointed, public officials serve those who put and keep them in office. We cannot depend upon them to fight our battles.”

“Black power is organizing the rage of Black people and putting new hard questions and demands to white America.”

“The American color bar unless speedily removed will be the rock on which our international Good Neighbor policy and our pious claims to moral leadership will founder.”

“A Negro has handicaps enough without having to pay taxes to support the education of white students to learn how to suppress him.”