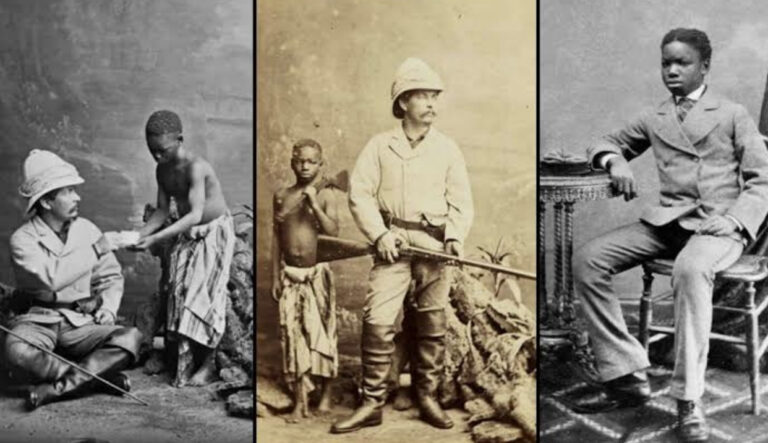 Kalulu Dugu M’hali, was the African personal servant and later adopted son of explorer of Henry Morton Stanley. As a slave, Kalulu was given by an Arab merchant in present day Tanzania to Stanley during the explorer’s quest to find the missing Dr David Livingstone.

He was educated in London and accompanied Stanley on his travels to Europe, America and the Seychelles. During an expedition in 1877 at age 12, Kalulu died in the Lualaba River, the headstream of the River Congo, Stanley named these rapids ‘Kalulu Falls’ in his memory.

The Story of Kalulu

Kalulu M’Hali was born in Africa and after he was given to Morton Stanley at Tabora in Tanzania, the young boy became Henry Morton Stanley’s favorite.

Although he was previously enslaved M’Hali was freed, but Morton Stanley changed Kalulu’s name to Stanley from his original name Ndugu M’Hali.   “My friends brother” is the meaning of Ndugu M’Hali and he hated to be called Stanley, instead he chose to be called  “Kalulu,” which is the Swahili term for a young male antelope.

After Stanley found Dr. Livingstone, he returned to England and decided to take Kalulu with him. He was initially enrolled by Stanley at a school in Wandsworth, South West London, where the school headteacher soon noted that Kalulu was ” clever and progressing in English.” Language.

He was Stanley’s constant companion, and Stanley would record his reactions to new things. He commented on how good he was after drinking wine and upset after trying mustard. Stanley went on a lecture tour to America and to Paris, and Kalulu went with him. At one point they were delayed in the Seychelles, and whilst there and in London, Stanley had his photograph taken with Kalulu in the background.

Moreover, Stanley wrote and published a book called “Kalulu, Prince, King and slave” in 1873. The book has been called a homosexual love story, and it describes a growing friendship between a character called Kalulu (an “Apollo”), who is older than the real Kalulu and another boy called “Selim” (Stanley’s translator in Africa was called Selim)

Kalulu dined with members of society but often felt he was being humiliated as a result of a previous racist encounter. It was only when introduced to Lord Freeth that he really started to flourish in western society. Stanley said of Kalulu that he had “taken him to England and the United States, and whom I had placed in an English school for eighteen months.”

Stanley, who was eager to continue with Livingstone’s exploration work, withdrawn Kalulu from school after the death of Dr. David Livingstone in Zambia in 1874, and the two returned on a mission to Africa.

Stanley was sent back to Africa under a mission supported by The Daily Telegraph in London and the New York Herald as an “ambassador of two great powers.” He was to take with him an “army of peace and light,” and this included his protégé Kalulu. Stanley was to map central Africa and report on suspected slave traders whom Stanley had lectured against whilst in England.

In 1877, while sending Kalulu who was skillful and clever, Stanley embarked on an expedition to find the source of the Nile river in the Congo.

M’Hali died in “Kalulu Falls” (part of the Livingstone Falls on the Congo River), when one of the expedition’s canoes was taken over the waterfall. He and four others were killed.  After learning of the tragedy, Stanley vowed to rid the empire of its only remaining slave master, the one they called ‘Marsh’. It was his last request to have the Livingstone Falls renamed after Kalulu. Unlike many new names that Stanley gave to places, the title of Kalulu Falls stuck.

M’Hali accompanied Stanley around Europe and America between 1872 to 1873, he posed during that period for a wax model that was later installed in the museum of Madame Tussaud in London.

M’Hali born in 1865 and died on 28 March 1877. He died young, but he visited Europe, America and the Seychelles throughout his short life.