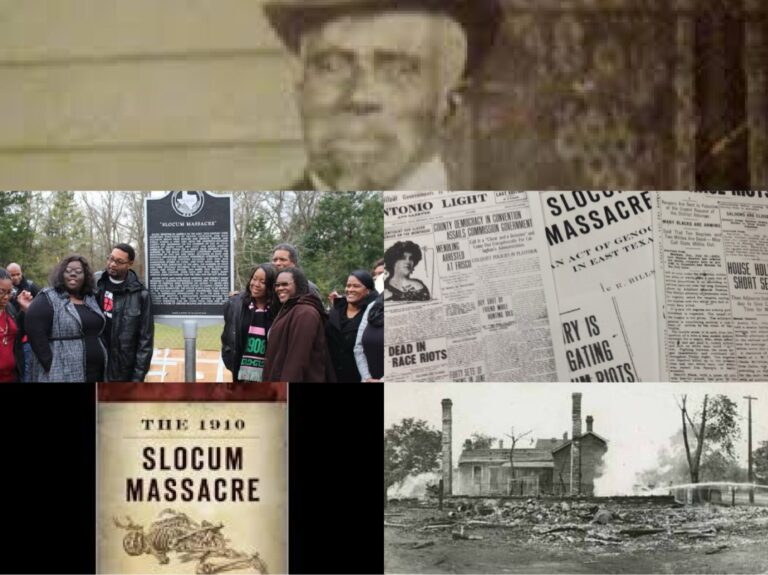 On July 29, 1910, a group of people were killed in what is now called the Slocum Massacre, at Slocum, Texas, a rural area in southeast Anderson County, a thriving African American community once inhabited the city, when black individuals owned numerous businesses and farms.

In this small village in rural East Texas, the day had begun like any other Friday, but before the day was out, one of the worst racial massacres in Texas history would take place.
The shooting began just after sunrise and continued all day long.

How the Slocum Massacre Began

Racial tensions in the Slocum area were brought on by the lynching of a black man in the nearby Cherokee County before to the slaughter. Rumors among whites claimed that black inhabitants of Slocum had been gathering to discuss organizing an armed uprising. When a white man allegedly tried to collect a disputed debt from a respected black farmer called Abe Wilson and when a road construction foreman assigned an African American to handle fundraising for road improvements, racial tensions only grew.

Jim Spurger, a local white farmer who was enraged by the incident, became the main instigator of the fight that resulted in the slaughter. Spurger allegedly initiated the events by alleging that blacks had threatened him, according to numerous media and eyewitness testimony.

Charlie Wilson, Cleve Larkin, and Lusk Holley, three teenage African-American boys, were going down the street when they came into contact with a group of ten white men. They fired without prior notice. Larkin passed away. Wilson sustained chest and leg injuries. Holley avoided harm and ran into the marsh with Wilson.

Soon, there were other groups of white, armed men prowling the region and killing any black individuals they saw. For the following 48 hours, they carried out their systematic plan by moving from cabin to cabin as they made their way through the woods.

According to Texas Public Radio, The local sheriff of Anderson County at that time, William H. Black, reported – “Men were going about killing Negroes as fast as they could find them, and, so far as I was able to ascertain, without any real cause. All known victims were unarmed and most were shot in the back. No whites were injured.”

Newspaper reports tallied between 8 and 22 were killed at the scolum massacre. All were African-Americans. But the real number of fatalities is unknown. There is evidence to suggest African-American casualties could be as high as 200.

Constance Hollie-Jawaid is a descendant of one of the survivors of the Slocum Massacre.

Despite being born a slave, Jack Holley was able to become a successful landowner and businessman in Slocum after being freed. He was able to escape the assault and fled with his family. They lost all of their possessions when they changed the spelling of their last name out of fear of retaliation.

For years, Hollie Jawaid has campaigned to ensure that the Slocum Massacre victims are not forgotten. She also claims that trying to get the local and state historic commissions to acknowledge Slocum’s existence has been met with resistance.

“No one wants to hear it – because no one wants the story to get out – I truly believe that,” Jawaid says.

During the interview, sitting next to Hollie-Jawaid is her cousin Colecia Hollie-Williams and on her lap is her toddler son, Ray Anthony Williams. Hollie Williams is working with her cousin to bring attention to the 1910 Massacre that almost wiped out their blood line.

“We’re not trying to stir the pot. All we’re trying to do is bring awareness to what happened and justice – as my grandfather would say – for justice’s sake. It’s a story that needs to be told. It’s my heritage, my family’s heritage, my son’s heritage.   And people need to know what happened.”

But what actually occurred in 1910 on that day? And during the crucial days before the Massacre? There are stories, but they are not clear.

Newspaper accounts are a way to gain some understanding of the atmosphere and events surrounding the attack, but they are an inaccurate record that has been distorted by prejudice, contemporary demands, and the need for sensationalism.

The initial Slocum press reports claimed that a race riot had broken out. On July 30, the Associated Press reported that a race riot claimed the lives of 12. 10 were black, and 2 were white. The AP piece falsely claimed that 200 black men were arming and that additional violence was anticipated. The armed African Americans were “bent on clearing out the entire white population,” according to the report that appeared on the front pages of newspapers across Texas.

The front page of the New York Times that was published the following day had a more accurate depiction of the situation in East Texas. Uncredited Times writer said that a mob of 200 white males massacred up to 25 black Slocum residents who were unarmed and were shot like sheep without cause.

Sheriff Black was quoted in the Times: “Men were going round killing Negroes as fast as they could find them and so far as I was able to ascertain without any real cause. These Negroes have done no wrong that I could discover. There was just a hot headed gang hunting them down and killing them.”

The Slocum follow-up stories were relegated to the paper’s back pages after the first headlines. There was no written explanation for what transpired during the racial riot or proof that 200 armed black men were indeed plotting to massacre white people in East Texas. However, there was some further information that the Texas Rangers were looking into the Slocum pogrom and had indicted the white guys who organized it. And it didn’t take long for the story to completely disappear from the press. Then, when it came to teaching Texas history in classrooms, this traumatic and humiliating chapter in the state’s past was omitted. It didn’t take long for the account to be virtually forgotten.

But cousins Hollie-Jawaid and Hollie-Williams knew well the story of the Slocum Massacre because it was kept alive by their family’s oral tradition.

“I heard the stories of Slocum at family gatherings. Just sitting around the table and talking about where we came from.”

“I remember my dad taking us to Slocum. My brother and I and my mom. And showing us where his grandfather had lived and then just telling us the story of Slocum – as much as he could that was age appropriate that we could understand. I just remember looking at all the land and my daddy being so proud and saying my grandfather owned all of that – our great grandfather. Coming out of slavery to own the only granary, the dairy, the general store. Jack and Marsh did pull themselves up by their boot straps but they did it too well which caused envy in the white community.”

E.R. Bills is a Texas-based author. His book “The 1910 Slocum Massacre: An Act of Genocide in East Texas” digs into the causes and fall out of the attack. He says it’s impossible to determine how many people were killed in the massacre.

“There is no official number. The newspaper reports originally suggested two dozen. Eventually when indictments were handed down it was for seven, but the sheriff of the day – of the time – said most of the bodies would be found by the buzzards. There were too many. They were everywhere. And strangely no more where found after he said that. It appears that some of the perpetrators of the massacre went around covering the evidence and in fact some of the black families were retrieving their deceased loved ones and burying them and prevent further abuse so it’s not clear but oral tradition suggests that there were at least two hundred killed.”

“And it also led to a racial expulsion, probably thousands fled. A racial expulsion basically… it’s when people flee an area because they are being persecuted because of their race or because of their ethnicity. It’s happening in parts of the world now. But in that period when the white folks started killing all the black folks they could find obviously the surviving African Americans fled. They fled their homes, their property, their jobs. Some of them fled with nothing more than the clothes on their back.”

“One of the descendants describes her ancestors telling her – you know they had just heard that the white folks had gone crazy killing black folks and so they just started fleeing and in fact many of the victims in the end were shot in the back. I mean it wasn’t enough that they were fleeing. They were going to kill them regardless.”

“The Slocum Massacre – the newspaper accounts – when you put them all together and read every one of them – they differ on everything that happened.”

The remnants of Slocum’s past can still be seen in the city today. Slocum has a black population of just under 7%, compared to more than 20% in most of the adjacent communities. Constance Hollie-Jawaid, a relative of the victims, spearheaded the efforts that resulted in the dedication of a historical marker to remember the incident in 2016.