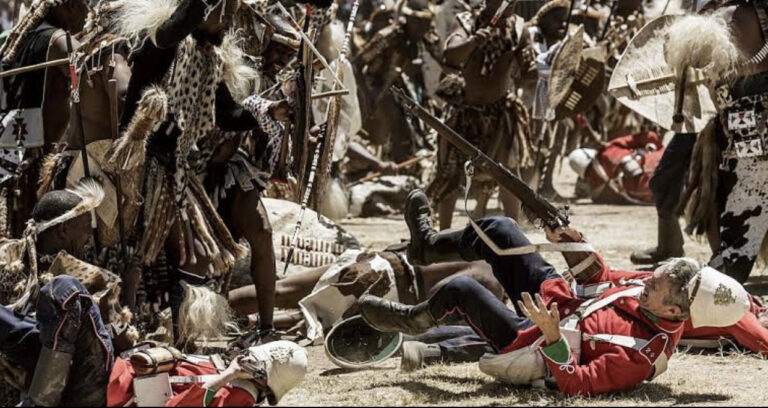 To commemorate the day in 1879 when the Zulus decisively defeated the British, thousands of Zulu men gathered at the historic site of Isandlwana on Saturday, January 21.

It is one of the biggest victories in Zulu history and the only conflict where the British army’s guns and cannons were destroyed by spears and oxhide shields.

Zulu warrior, Muzi Nyandeni, said: “In fact we are here to celebrate the conquer of Zulu warriors, where Zulu conquered the white person.”

The Zulus were not professional soldiers, but under Shaka Zulu in the early 1800s had became very adept at war.

John Murphy his a Major in the Royal Welsh Army and took part in thee event.

During the re-enactment many Zulus sang songs and paraded with traditional animal skins, bone necklaces and spears.

Gavin Slater, team leader of The Dundee Diehards re-enactment team, said he recognises how significant the event was.

“In fact Isandlwana is one of the most probably humiliating defeats of the British army ever,” he said.

Despite the defenders having rifles, the attackers forced them into a bloody battle and then defeated the colonial soldiers.

Out of 1,700 men at the Isandlwala garrison on the morning of the battle about 1,300 doom lay dead.

Victory is one of the most important sources of pride for Zulus.