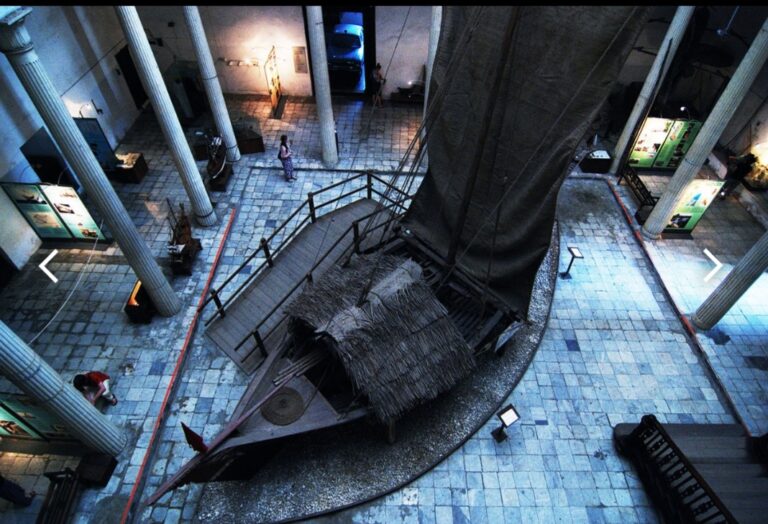 Africa is a continent rich in cultural heritage. Some available evidence of age-long deep cultural identities, practices and civilizations could be traced as far back as 3000 BC.

Many of these cultural evidences of Africa’s unique civilization were lost to colonialism and the looting by Europeans. However, quite a great number of important African Artefacts were also preserved; and most of these extremely interesting artefacts are preserved in many modern African museums.

For an enthusiast of African civilization, there are a number of African museums that you might be interested in seeing.

Here are the top ten African museums that would pick your interest—because the collections of several African artifacts, in these top 10 African museums would blow your mind.

Established in 1958, the National Museum of Ethiopia is also referred to as the Ethiopian National Museum; this is one of the 10 top African museums.

Located in the capital city of Ethiopia, Addis Ababa, the National Museum of Ethiopia is one of the top museums in Africa, which houses top collections of artefacts from the ancient to the modern era. Some of the top artefacts domiciled in this museum are Lucy and Selam, the fossilized remains of early hominids. Lucy and Selam are some skeletal samples of Australopithecus afarensis which are believed to have existed about 3 million years ago.

NME has four main sections: the basement, the first floor, the second floor and the third floor. The basement section contains fossil collections of early hominids and other excavated fossils.

The first floor contains ancient and modern relics from important personalities like Emperor Haile Selassie I. The second floor contains a collection of cultural products of many eras like weapons, jewelries, utensils, clothing and musical instruments. The third section contains scientific exhibitions of different cultures of the people of Ethiopia in different eras.

This is a place to visit, and if you love scientific findings about evolution and traditional arts, then make this your top 10 African museums to visit in 2022.

The Zanzibar National Museum of History and Culture in Tanzania is housed in a state-of-the-art edifice also referred to as Beit-al-Ajaib, which translates to ‘The House of Wonders’. First built in 1883, Beit al Ajaib was used as a ceremonial palace for Sultan Barghash.

After the building was destroyed in a short war against the colonialists, Sultan Hamad rebuilt and used it as his palace from 1902 to 1911.

The House of Wonders is one the biggest and culturally endowed museums in Africa and should be on your list of the top 10 African museums to visit in 2022.

The Zanzibar National Museum of History and Culture contains collections from both the Indian Ocean and cultural artefacts representing the Swahili civilization.

A tourist with an interest in the rich Swahili cultures, history and cultural evolutions, and an interest in learning about great ocean life in Zanzibar should certainly treasure a visit to The House of Wonders.

Though the building, which formerly housed a department store, was built from 1901 to 1909, MAMA was inaugurated in 2007. The museum contains modern and contemporary artworks which depict Algerian culture, philosophy and ecstatic values; thus making it to our list of top 10 African museums to visit in 2022.

MAMA also houses rich traditional artworks from outside Algeria, like artworks from France, Italy, South Korea and Senegal. The MAMA maintains a somewhat active exhibitionary programming, averaging around three shows each year, presenting both monographic and group exhibitions. If you are an art enthusiast, the Museum of Modern Art of Algiers is your go-to place.

L’Aventure du Sucre is a museum that represents the history of the Mauritius people and the important role sugar plays in their culture.

For the fact the sugar industry has played a huge role in nourishment and development of the people and economy of Mauritius, it is not a bad idea if a whole museum is dedicated to their history with sugar.

L’Aventure du Sucre is a Sugarcane factory turned museum in Mauritius. The former sugar factory was converted into a museum in 1999. Next to the museum is the Domaine de Beau Plan sugar cane field. Inside the large museum is filled with large factory equipment and each section is a different production process section up to the finished product.

A visit to this museum includes a complimentary tasting of about more than 30 products of Le Village Boutik. Some of these products are unrefined brown sugars, rums, jams, honey, etc. A visit to The Adventure of Sugar will give one an insight to how a particular traditional product could be so important to a people that a museum is built in its honour.

A visit to the beautiful island of Mauritius would not be complete if you did not learn about their value for sugar and pay a visit to this sugar museum.

The Apartheid system in South Africa brought with it, immense struggles for the people of South Africa; from the native south Africans not owning lands and properties, to segregated education, to living aparts, to criminalising interacial marriage, banning the black political parties, etc.

Between 1960-1983, millions of Africans were kicked out of their homes, while the European colonizers segregated the neighbourhoods.

Apartheid was a harsh reality that confronted the common South African, while the Caucasians enjoyed what they stole from the native Africans.

This Museum is a 21st century museum, established in 2001 and prominent for 20th century history of the South Africans.

The Apartheid Museum is a specialized museum that houses the “Apartheid Story”; and illustrates the rise and fall of Apartheid. This is one of the museums to visit in year 2022; events are usually held five times in a year, to celebrate the end of apartheid and the beginning of the multiracial democracy in South Africa.

The Apartheid Museum is an interesting museum to visit, as it is a place that reminds people of the traumatic, thematic & historic events, that led to the end of apartheid and the democratic elections in 1994.

This museum in Dakar Senegal, holds memories of the Atlantic Slave trade on Goree Island and was declared open as a museum in 1962.

House of Slaves was a point of no return for slaves during the era of slave trade; once held in the building, a slave is said to have no faith in returning back to his people, but shipped off to America.

The house of slaves was converted and reconstructed into a museum through the help of a Senegalese curator, Joseph Ndiaye.

Ndiaye, a soldier in the French colony, who fought for France during world war 11 and Vietnam war, oversaw the memorial House of Slaves on Goree Island for 40years. This Island was an anchor point for slaves, before their Departure to strange lands.

House of slaves was built by an Afro-French family and is one of the oldest on the Island.

This place is an interesting place to visit as it brings back memories and houses original art representations of the slaves in shackles, the door of no return, basement cells, monuments, photographs, etc.

In making a list of museums to visit in 2022, ensure House Of Slaves is top on the list.

The Museum of Egyptian Antiquities is a Museum that houses lots of Antiquities of ancient Egypt. Built in 1901, this museum has 120,000 antiques stored up and each item is represented on display.

The grave mask of King Amenomope, the Gold Mask of Tutankhamun, Mummy Mask of Psusennes, Ramesses 111 prisoner tiles, Figurine of Khufu, Statue of Menkaure, Narmer Palette, Rahotep and Nofret (2575-2550 BC), Dwarf Seneb with his wife (2400-2500 BC), Throne of Tuntankhamun, canopic box from Tuntankhamun’s tomb and many other Antiquities are on display in this great museum. These Antiquities are based on facts that existed in the ancient times.

Museum of Egyptian Antiquities should be on the list of top museums to visit in Africa.

Created in 1974 and located in Cape Coast Ghana, This archaeological museum of the Cape Coast Castle is a slave castle built by the European slave traders; it was used as a store house for slaves before their final departure to America. It was described as a gate of no return, as that was the final destination before heading off to the Atlantic ocean.

The Cape Coast Slave Castle was converted to a museum in 1974 and notable parts of the museum are; Gate of no return (the final boarding pass to the Atlantic ocean), the dungeon/slave holes and the cannons pointing towards the sea.

Touring this edifice is a good educational tool for history, as well as creating a memoirs to honour and remember the numerous horrendous treatment meted out on the enslaved black Africans.

This site should be one of the top 10 museums to visit in Africa.

Constructed in the beginning of the 20th century, Marrakech Museum is built in a palace.

The Museum contains rich traditional antiques of the Moroccans; weapons, costumes, pottery, carpet and other traditional objects. There are lots of pictures, tiles and paintings adorning the museum.

When visiting, ensure you have a little understanding of French or Arabic, as that is their official language. It is also advisable to book a visit ahead of time.

Located in Benin City Nigeria and built in 1973, Benin Museum houses rich, significant and monumental artefacts of the histories of the Benin Kingdom. These artefacts are made of bronze, iron and terracotta.

The importance of museums cannot be overemphasized, as their main objective is to educate people about their past and present.

If you’re a historian or a tourist that loves historic artefacts, then National Museum Benin should be on your A-list of Museums to visit in Africa.

A Museum is a powerhouse of history and culture.