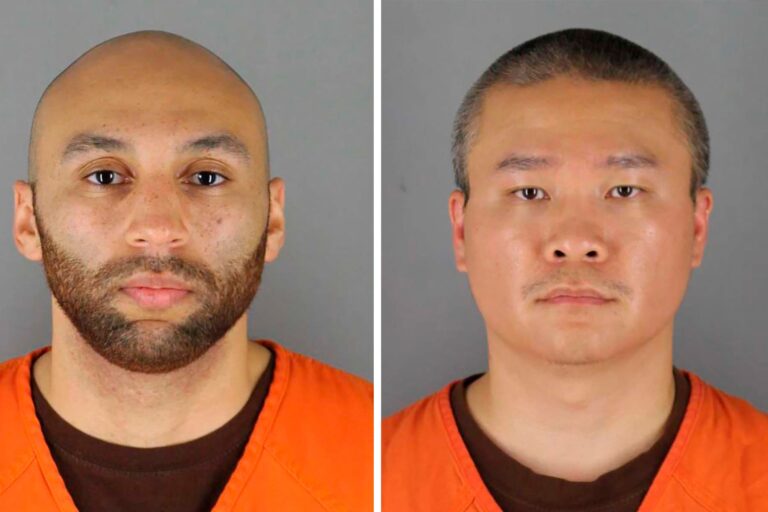 According to St. Paul ABC affiliate KSTP, Magnuson sentenced Kueng to three years in federal prison, followed by two years of supervised release, being aware of the fact that he was a rookie cop at the time of Floyd’s death.

In a separate hearing, Magnuson sentenced Thao, a nine-year veteran of the Minneapolis Police Department at the time of Floyd’s death, to 3 1/2 years in prison, followed by two years of supervised release, according to KSTP.

Ross spoke to Kueng directly and compassionately, “This sentence will not define you,” and urging him to “define your purpose,” according to KSTP. “This does not mean you cannot find your footing to stand up for what’s right in the future,” Ross told Kueng.

Sabrina Montgomery asked Magnuson to impose the maximum sentence on both Kueng and Thao.

According to KSTP, Montgomery stated that “all of these men deserve to serve longer sentences.” “The system these officers operated in is flawed, but again, where is their humanity?”

Assistant U.S. Attorney Manda Sertich told Magnuson that Kueng, who was a rookie cop at the time of Floyd’s murder, confessed during his trial testimony that he was aware it was his duty to intervene, but he did not act.

“All he had to do per MPD policy was, attempt to intervene, but he didn’t say a word. Not one word,” Sertich said.

Before being sentenced, Kueng refused to make a statement in court. However, his lawyer, Thomas Plunkett, spoke on his behalf, telling Magnuson, “He’s a nice young man that attempted to help the community by taking on a difficult role, and now he’s being sentenced for that.”

Kueng, 28, and Thao, 35, were found guilty by a federal jury in February, along with their former police colleague Thomas Lane, 39, who was sentenced to 2 1/2 years in prison last week for violating Floyd’s civil rights.

Federal prosecutors sought a sentence of 6 1/2 years in prison for Lane, which was the maximum allowed under federal sentencing guidelines.

All three men were found guilty of using the “color of the law,” or their positions as police officers, to deprive Floyd of his civil rights by willfully ignoring his critical medical needs.

“Mr. Thao, as you watched my love being suffocated under the knee of your co-officer, I will never forget you saying to the onlookers, ‘This is why you don’t do drugs,'” Ross said, referring to the video shown during the officers’ trial.

Robert Paule, Thao’s lawyer, described Thao as “a decent person who was just trying to do his job.”

Thao testified in court, telling Magnuson that after being arrested in Floyd’s death, he discovered God and learned to rely on his faith.

Prosecutors said Kueng, Thao, and Lane, who was also a rookie cop, all failed to intervene when the handcuffed, unarmed 46-year-old Black man was pinned under the knee of their senior officer, Derek Chauvin, for more than nine minutes on May 25, 2020, outside a Minneapolis convenience store where Floyd was accused of purchasing cigarettes with a forged $20 bill.

Thao and Kueng were also found guilty of violating Floyd’s right to be free of an unreasonable seizure by willfully failing to intervene to prevent Chauvin from inflicting bodily harm on Floyd.

After pleading guilty in December to violating Floyd’s civil rights and admitting he kept his knee on Floyd’s neck even after he became unresponsive, Chauvin was sentenced to 21 years in prison by Magnuson.

Kueng and Thao’s sentences are shorter than the recommended federal sentencing guidelines, which call for 4 1/4 to 5 1/4 years in prison.

“The facts of this case do not amount to second-degree murder under federal law,” Magnuson wrote in a ruling last week. “Defendants Kueng and Thao each made a tragic misdiagnosis in their assessment of Mr. Floyd.”

Magnuson noted that Kueng and Thao believed Floyd was suffering from a drug overdose and “excited delirium,”: a syndrome in which a subject exhibits wild agitation and violent behavior, which can sometimes lead to death.

Lane was the only officer involved in Floyd’s fatal arrest who expressed concern for his welfare. Lane was caught on camera asking twice if they should roll Floyd onto his side from a prone position to help ease his breathing in a police body-camera footage displayed during the three former officers’ federal trial.

Chauvin will serve his federal sentence concurrently with his state sentence.

Lane also pleaded guilty to state charges of aiding and abetting second-degree manslaughter. In exchange for the plea, prosecutors agreed to drop the most serious charge against him, second-degree unintentional murder. Lane is currently awaiting sentencing in state court.

Following the sentencing hearings on Wednesday, Ross expressed disappointment in the punishment imposed, particularly for Thao.

“The sentence, particularly for Tou Thao, didn’t really seem to match the crime to me,” Ross told reporters outside the courthouse. “I’m saddened, but I suppose we have to take all these little small triumphs and know that we’re going to move forward even though they’re just little crumbs that they kind of keep giving us, but maybe one day we’ll get a loaf of bread.”