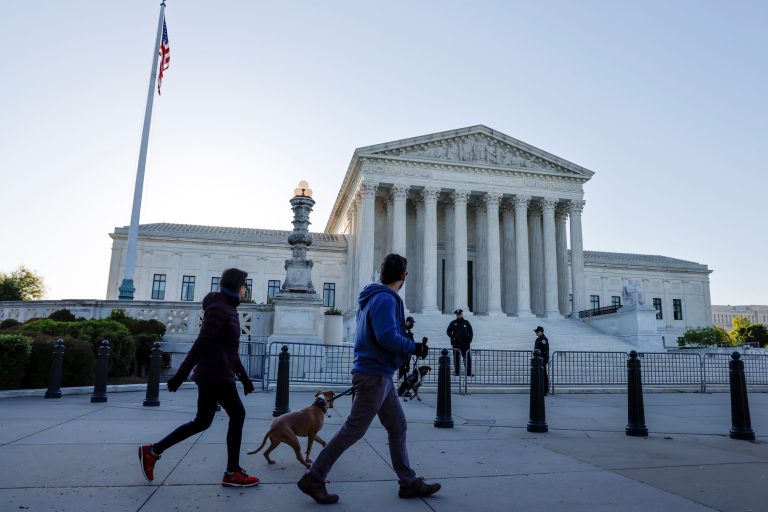 The United States Supreme Court ruled on Thursday that the right to carry a gun outside the home is guaranteed by the Constitution, administering a major decision on the meaning of the Second Amendment.

The 6-3 ruling was the court’s second significant ruling on the right to “keep and bear arms.” The court stated for the first time in a landmark 2008 decision that the amendment protects a person’s right to possess firearms, though the decision was limited to keeping guns at home for self-defense.

After years of avoiding the issue, the court has now taken the ruling to the next level by applying the Second Amendment beyond the boundaries of homeowners’ property in a decision that could affect the state and local government’s ability to impose a wide range of firearms regulations.

The decision, made as Congress advanced the most significant gun violence prevention legislation in nearly 30 years, involved a New York law that required indicating a special need to obtain a permit to carry a concealed handgun in public. The state prohibits openly carrying handguns, but allows for residents to apply for licenses to carry them concealed.

However, the law in question stated that permits could only be granted to applicants who demonstrated a special need, a requirement that went beyond a general desire for self-protection.

Gun owners in the state sued, claiming that the requirement made it nearly impossible for ordinary citizens to obtain the required license. They claimed that the law reduced the Second Amendment to a limited privilege rather than a constitutional right.

The court agreed with the challengers and overturned the heightened requirement, but it left the door open to allow for states to impose restrictions on gun carrying.

“The constitutional right to bear arms in public for self-defense is not ‘a second-class right, subject to an entirely different body of rules than the other Bill of Rights guarantees,’” wrote Justice Clarence Thomas in the majority opinion. “We know of no other constitutional right that an individual may exercise only after demonstrating to government officers some special need.”

In the ruling’s most important language, Thomas stated that concern for public safety is insufficient to justify new gun controls.

“The government must affirmatively prove that its firearm regulation is part of the historical tradition that delimits the outer bounds of the right to keep and bear arms,” he wrote.

According to gun law experts, a portion of the ruling sets a high bar for additional gun restrictions.

Justice Brett Kavanaugh wrote in a concurring opinion, joined by Chief Justice John Roberts, that the ruling does not prevent states from imposing licensing requirements for carrying handguns for self-defense, such as fingerprinting, background checks, and mental health records checks.

New York’s law was “problematic because it grants open-ended discretion to licensing officials and authorizes licenses only for those applicants who can show some special need apart from self-defense,” in effect denying citizens the right to carry a gun to protect themselves. He wrote.

“The dangers posed by firearms can take many forms,” Breyer wrote. “Newspapers report mass shootings occurring at an entertainment district in Philadelphia, Pennsylvania (3 dead and 11 injured); an elementary school in Uvalde, Texas (21 dead); a supermarket in Buffalo, New York (10 dead and 3 injured); a series of spas in Atlanta, Georgia (8 dead); a busy street in an entertainment district of Dayton, Ohio (9 dead and 17 injured); a nightclub in Orlando, Florida (50 dead and 53 injured); a church in Charleston, South Carolina (9 dead); a movie theater in Aurora, Colorado (12 dead and 50 injured); an elementary school in Newtown, Connecticut (26 dead); and many, many more.”

“And mass shootings are just one part of the problem,” he added. “Easy access to firearms can also make many other aspects of American life more dangerous. Consider, for example, the effect of guns on road rage.”

“New York’s Legislature considered the empirical evidence about gun violence and adopted a reasonable licensing law to regulate the concealed carriage of handguns in order to keep the people of New York safe,” he concluded.

All states permit the carrying of concealed firearms in public, although many require state-issued permits. The decision on Thursday calls into question laws similar to New York’s in several other states, including California, Hawaii, Maryland, Massachusetts, and New Jersey, as well as the District of Columbia, that give local officials more leeway in denying permit requests.

President Joe Biden issued a statement in which he expressed his “deep disappointment” with the Supreme court’s ruling, adding that it “contradicts both common sense and the Constitution, and should deeply trouble us all.”

The president stated his commitment to doing everything in his power to reduce gun violence and urged states to enact “commonsense laws” to make communities safer.

“In the wake of the horrific attacks in Buffalo and Uvalde, as well as the daily acts of gun violence that do not make national headlines,” he said, “We must do more as a society, not less, to protect our fellow Americans.”

New York’s Democratic governor, Kathy Hochul, also reacted to the Supreme court’s ruling on Thursday, tweeting first, “It is outrageous that at a time of national reckoning on gun violence, the Supreme Court has recklessly struck down a New York law that limits those who can carry concealed weapons.”

“In response to this ruling, we are closely reviewing our options, including calling a special session of the legislature. Just as we swiftly passed nation-leading gun reform legislation, I will continue to do everything in my power to keep New Yorkers safe from gun violence,” She stated.

Hochul also called on Congress to strengthen federal gun laws by closing loopholes and raising the age to purchase a semi-automatic weapon from 18 to 21 at an event celebrating a new law to improve school safety in the state.

State Attorney General Letitia James said she would work with Hochul and the Legislature to amend the licensing statute so that New York residents are still protected.

“I want to reassure all New Yorkers that our robust gun protection laws remain intact, and we will be working with our partners in government to further strengthen them,” James said.

New York City Mayor Eric Adams stated that the Supreme court’s decision “has made every single one of us less safe from gun violence,” and vowed to work to “mitigate the damage” of the decision.

Adams and New York City Police Commissioner Keechant Sewell emphasized that the laws in New York remained unchanged for the time being because the Supreme Court’s decision remanded the case to a lower court for implementation. They both warned, however, that the ruling would likely result in more guns on the streets and would change how police and other public safety officials work in cities.

“For a city like this, densely populated, this decision is just not rooted in reality,” Adams said. “This is a city and a country where people have AK-47 assault rifles, multiple shots. I don’t know what the Supreme Court was thinking about.”