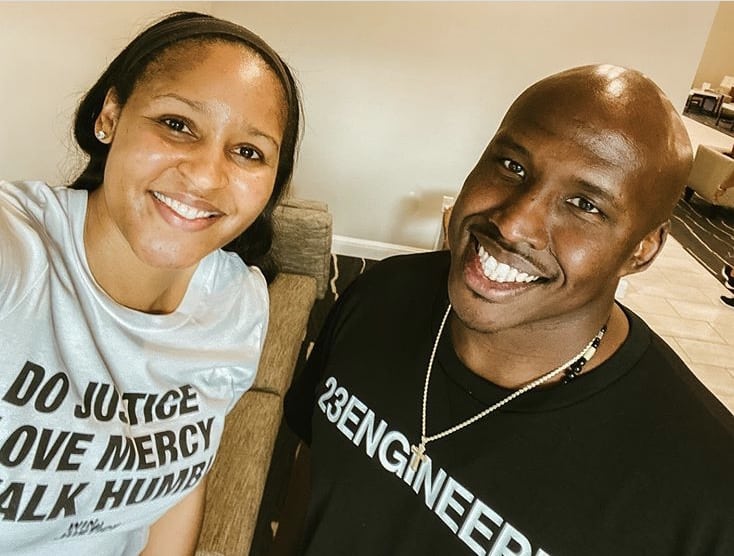 Share
Facebook Twitter LinkedIn Pinterest Email
Maya Moore who has now married Jonathan Irons, a man who she helped overturn a wrongful conviction. Maya Moore has announced the big news today, although the two wedded over the summer.
It looks like true love can never be stopped when it’s destined. According to TMZ, “Moore says she met Irons when she was 18 through a prison ministry program; and grew close over the years while fighting for his freedom.” Moore’s tenacious efforts were justifiable, and understandable given Irons’ circumstances. “Irons was sentenced to 50 years in prison in 1998 after he was convicted of breaking into a Missouri home and shooting a homeowner twice. In March, a judge ruled that prosecutors had suppressed fingerprint evidence that would have strengthened Irons’ defense,” according toESPN.

Moore who is a prominent WNBA superstar and advocate for social justice issues; actually stepped away from her sports career in 2019 to help free Irons; “working with lawyers, attending hearings, and visiting with Irons to offer moral support,” according to Time. While locked up, Irons wanted to marry Moore but “at the same time [he wanted to] protect her because being in a relationship with a man in prison, it’s extremely difficult and painful”.
As the old adage goes, “love conquers all”, and Moore’s continuous support of Irons wasn’t in vain. Now happily married, the lovely couple has now shared their joy with the world on today’s Good Morning America: “We wanted to announce today that we are super excited to continue the work that we’ve been doing together, but doing it as a married couple,” Moore said. “We’re excited to share this new chapter of life together.”

Even though Moore is viewed by many as one of the best basketball players ever, Moore still chose Irons’ justice rather than her passion. A representation of how love will always prevail.
Jonathan Irons Maya moore WNBA
Share. Facebook Twitter Pinterest LinkedIn Tumblr Telegram Email
admin