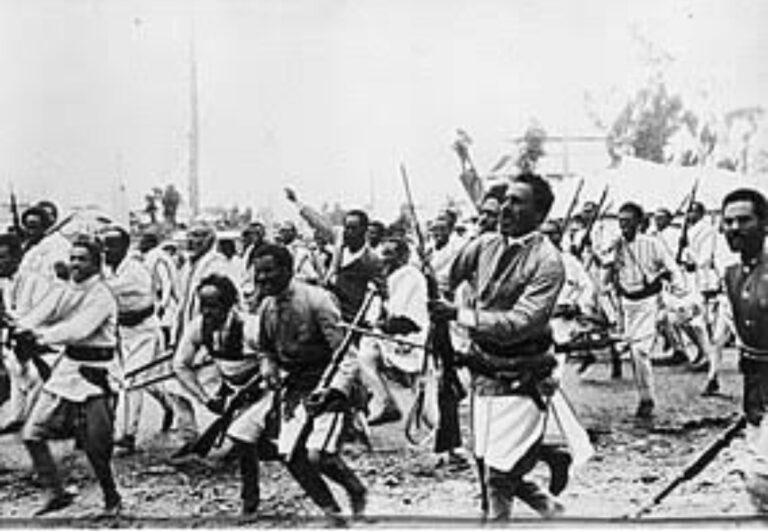 A structure known as The Yekatit 12 Square Monument can be seen in the Siddist Kilo neighborhood in the city’s center. The obelisk was constructed in honor of the 30,000 citizens who were slaughtered on February 19, 1937, by fascists. The three-day, indiscriminate slaughter was carried out in retaliation for the attempted assassination of Rodolfo Graziani, also known as “the Butcher of Fezzan,” Viceroy of Italian East Africa.

Between 1935 and 1940, the Italian government committed a sizable number of war crimes in Ethiopia. The deployment of mustard gas and the bombing of a Swedish Red Cross field hospital stand out among the others. The Italian government, however, continues to deny the Addis Ababa massacre and other mass executions despite strong historical evidence to the contrary.

Ian Campbell,  the author of  The Plot to Kill Graziani (Addis Ababa University Press, 2010), and The Massacre of Debre Libanos (Addis Ababa University Press, forthcoming), has presented  discoveries from his extensive research into the massacre of Addis Ababa, the greatest single atrocity of the Italian occupation of Ethiopia, and a hitherto undocumented event. Most of the documents, maps, photos and official government papers used in Campbell’s research were obtained from Italy. According to Campbell and Alberto Sbacchi, there are still vast quantities of “classified information” across Italy dealing with the war.

Every year on February 19, Ethiopians commemorate the Martyrs Day, when, 81 years ago, Fascist Italian troops slaughtered more than 30,000 Ethiopians after attempting to assassinate Marshal Rodolfo Graziani. Because of this, February is sometimes referred to as the month of martyrs. The most heinous atrocity, which the Italians carried out, might have qualified as the highest form of genocide.

Italy attempted a second attempt to colonize Ethiopia in 1934 after 40 years of planning following its defeat at The Battle of Adwa in Ethiopia. On May 14, 1934, the late Emperor Haile Selassie sent a letter to the former League of Nations, but Italy sent out a sizable army prepared to seize all of Ethiopia.

One of Africa’s most horrific murders occurred 85 years ago. Over 30,000 Ethiopians were massacred by Fascist Italy during Yekatit 12, a three-day bloodbath that took place under the Italian rule.

Mussolini gave the order to ruthlessly punish the Ethiopian inhabitants of Addis Ababa after two men of Eritrean descent launched hand grenades at the viceroy of Italy and Graziani, injuring the latter. Ethiopia has consistently fought the Italian control of East Africa, especially after the attack at Addis Ababa, therefore the Italian forces under Rodolfo Graziani undertook an ethnic cleansing operation that included scores of massacres and atrocities to “keep Ethiopians in line.”

The Italian response was immediate. According to Mockler, “Italian carabinieri had fired into the crowds of beggars and poor assembled for the distribution of alms; and it is said that the Federal Secretary, Guido Cortese, even fired his revolver into the group of Ethiopian dignitaries standing around him.” Hours later, Cortese gave the fatal order:

Comrades, today is the day when we should show our devotion to our Viceroy by reacting and destroying the Ethiopians for three days. For three days I give you carte blanche to destroy and kill and do what you want to the Ethiopians.

Yekatit 12 occurred on three consecutive days from February 19 to 21, 1937, but atrocities continued until the Ethiopian resistance and its allies drove the Italian occupiers out of the country. After a failed assassination attempt on Graziani and the Viceroy of Italy, Italian forces under Graziani launched a period of complete war against the Ethiopian populace.

Graziani was shot in the assassination attempt and suffered serious injuries. To the cries of “Duce! Duce!” and “Civiltà Italiana,” soldiers would beat and stab Ethiopians to death. The homes of the Greeks and Armenians in the capital were plundered and houses were set on fire. If they were discovered protecting Ethiopians in the city from the fascists, dozens of Greeks and Armenians were also executed. On the first day alone, tens of thousands of Ethiopians were brutally murdered.

In the Alem Bekagn jail in Addis Ababa, 62 Ethiopians were wrongfully sentenced to death by firing squad during the massacres by a kangaroo court. Mass executions and forced labor were both conducted in concentration camps run by the occupiers. Graziani personally made sure Ethiopian inmates would only receive the absolute minimum of meals to keep them working. Even more brutal treatment was practiced in the concentration camp at Nokra, and those who survived the facility endured years of hunger. The Third Reich later adopted the fascist Italian techniques and applied them to their own concentration camps during the Second World War.

Over 30,000 to 40,000 people were killed in Yekatit 12, according to Italian and British soldiers. Given that the Italian government kept most of its key players a secret during the Nuremberg Trials, that number may be much higher.

Ethiopia would continue to discreetly back Emperor Haile Selassie in exile and resist the Italian occupation as the atrocities got worse. During the Second World War, Ethiopian resistance groups led by the emperor teamed up with British forces to drive out the occupiers, ending the Italian occupation.

Till this day, Italy has yet to sincerely apologize to Ethiopia for occupying Yekatit 12 or make restitution. May the martyrs find eternal peace and continue to live on in our memories.