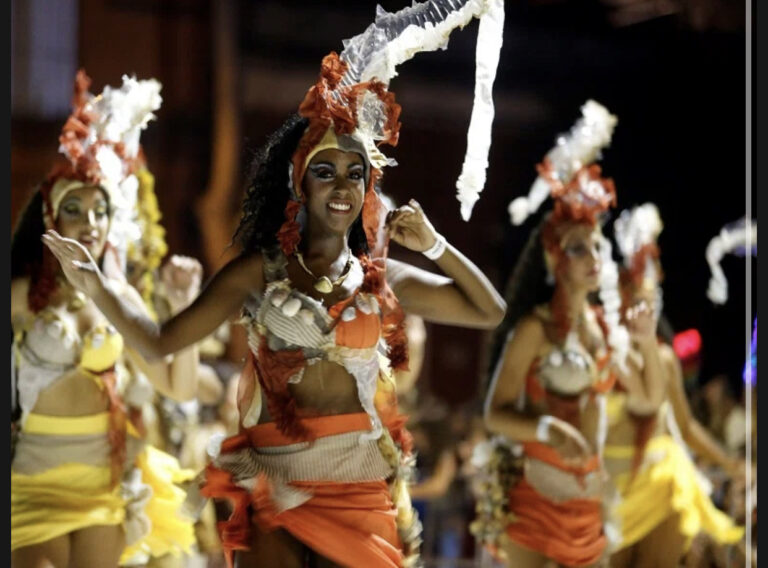 The South American republic of Uruguay is not one of the first names that come to mind when we think of the big nations of the African diaspora, such as Brazil, Cuba, Haiti, and the United States. Not alot of people are aware of the existence of Afro-Uruguayans.

The University of Pittsburgh historian George Reid Andrews provides an introduction to the history of the population of African ancestry in Uruguay.

Contrarily, Uruguay, which received about 600,000 immigrants from Europe between 1880 and 1930, has long promoted itself as one of the two “white republics” of South America (its neighbor Argentina is the other). 93% of its citizens identified as white in the national household survey of 1996, a number substantially higher than in the United States (where 75 percent of the population classified itself as white in the 2000 census).

But like other Latin American nations, Uruguay has seen a considerable increase in black civic and political engagement during the past 25 years. Organizations like Africana, Mundo Afro (Afro World), the Asociación Cultural y Social Uruguay Negro, the Centro Cultural por la Paz y la Integración, and others have pushed the country to recognize its black history and present and to work toward the full integration of its black and indigenous minorities into national life.

The salas de nación, mutual help societies set up on the basis of members’ African ancestry, marked the beginning of a lengthy history of black mobilization that began in the early 1800s. The port of call for slave ships delivering Africans to the Ro de la Plata region was Montevideo, the capital of Uruguay. However, during the late 1700s and early 1800s, about 20,000 of those Africans disembarked in Montevideo and stayed in Uruguay. The majority of them went on to Argentina. Afro-Uruguayans and Africans made up an estimated 25 percent of the population by 1800.

Six salas de nación from West Africa, five from the Congo and Angola, and two from East Africa are listed on an 1830s list of Montevideo’s thirteen salas de nación. In order to host their religious observances, gatherings, and dances, the salas acquired or rented pieces of land outside the city limits on which to construct their headquarters. They lobbied government officials, helped resolve disagreements and conflicts between slaves and their masters, and raised money for emancipation funds to purchase the freedom of their slave members.

The independence battles of the 1810s and 20s as well as the civil conflicts of the 1830s, 1840s, and the latter half of the 1800s saw extensive service from free and enslaved Africans as well as Afro-Uruguayans. The Free Womb law of 1825, which allowed children of slave mothers to be born free but required them to work for their mother’s master until they reached adulthood, and the full abolition of slavery in 1842 were the first rewards for slave military service.

Once free, Africans and Afro-Uruguayans demanded the full civic and legal equality guaranteed by the Constitution of 1830.  In theory, these rights applied equally to all citizens; but in practice, Afro-Uruguayans faced pervasive discrimination and racial prejudice.  In response to this discrimination, Afro-Uruguayans created the most active (on a per capita basis) black press anywhere in Latin America.  Between 1870 and 1950 black journalists and intellectuals published at least twenty-five newspapers and magazines in Montevideo and other cities.  This compares to between forty and fifty black-oriented periodicals during the same period in Brazil, where the black population is today some 400 times larger than Uruguay’s; and fourteen in Cuba (black population twenty times larger than Uruguay’s).

This thriving journalism of Afro-Uruguayans was at least in part a reflection of the nation’s successes in the late 1800s and early 1900s in terms of economy and education. One of the most prosperous national economies in South America was built on the export of meat and wool. In all of Latin America, Uruguay had the greatest rates of literacy and newspaper consumption by 1913, as well as the highest per capita GNP and tax receipts. Uruguay became a regional leader in educational accomplishment during national educational reforms in the 1870s and the early 1900s; at this time, Afro-Uruguayans had far higher literacy rates than people of color in other countries, such Brazil.

An vibrant black press as well as Afro-Uruguayan social and civic organizations in general were able to flourish in Uruguay thanks to the country’s relatively high educational success levels. The Partido Autóctono Negro, a black political party, was founded in Uruguay in 1936. Afro-Uruguayans also founded social clubs, political clubs, dancing and recreational groups, literary and drama societies, and civic organizations (PAN). Three such parties existed in Latin America; the other two are found in Brazil and Cuba (Partido Independiente de Color, 1908–12). (the Frente Negra Brasileira, 1931-38).

The PIC and FNB were later declared illegal by their respective national governments; the PAN, on the other hand, was allowed to operate freely but was never able to garner a sizable following among voters. Two major parties, the Colorados and the Blancos, dominated Uruguayan politics during the 1800s and the majority of the 1900s. Voters from Afro-Uruguay were split between those parties, with the Colorados receiving the majority of their support. Inability to disrupt that two-party system led to the PAN’s dissolution in 1944.

The 1940s and 1950s were Uruguay’s most active years of economic progress and prosperity. The years of “como Uruguay no hay” (there is no place like Uruguay), a semi-official phrase at the time, were marked by a surge in exports to the Allies during World War II, to a devastated Europe in the years following the war, and to the US during the Korean War. Those should have been the best years for black upward mobility, but prejudice and discrimination persisted in preventing it.

An Afro-Uruguayan schoolteacher who was subjected to flagrant harassment by two administrators at the schools to which she was assigned was the victim of a well-known example of discrimination in 1956, which sparked a national discussion on racial problems in the nation. In Montevideo, where there were 15,000 service workers (hairdressers, waiters, hotel chambermaids, bus drivers, etc.), just eleven were Afro-Uruguayans, or less than one per thousand in a city where the Afro-Uruguayan population was most likely between 5 and 6 percent at the time. Only five Afro-Uruguyans received degrees from the top university in the nation, the publicly sponsored Universidad de la Repblica, between 1900 and 1950.

By 1980, when a Uruguayan reporter observed that “in dozens and dozens of establishments, the total number of black employees does not surpass ten,” conditions had reportedly not significantly improved. No black hairdressers exist… There are no black servers at hotels, restaurants, or cafes, save from very low-class bars. However, Uruguay shared in the surge of black civic mobilization that swept over most of Latin America in the 1980s and 1990s. Afro-Latin Americans formed organizations to fight racism and prejudice in Brazil, Colombia, Panama, Peru, and other nations. The most significant such organization in Uruguay was Mundo Afro, which was established in 1988.

Mundo Afro successfully petitioned the national government to collect race data (for the first time since 1852) in the national household surveys of 1996 and 2006 in order to demand that Uruguay recognize its black minority as an equal part of the national community. According to several studies, Afro-Uruguayans made up either 6% of the national population in 1996 or 9% in 2006. (3.3 million in 2006). The two surveys also made no bones about the degree of racial inequality in the nation, just like in Brazil and the US, where racial data is frequently included in national censuses.

The incomes of Afro-Uruguayans are on average 60 percent of white earnings; whites are twice as likely as blacks to have a university degree; black poverty rates are double those of whites; black unemployment rates are 50 percent higher; and so on.

In light of such compelling evidence and in anticipation of the 2001 U.N. Conference against Racism, Racial Discrimination, and Xenophobia, which was held in South Africa, the Uruguayan government vowed to implement measures to combat racial inequality and discrimination. At the national level, President Tabaré Vázquez (2005–10) appointed a presidential advisor for Afro-Uruguayan affairs and established programs for Afro-Uruguayan women and Afro-Uruguayan youth in the Ministry of Social Development. The municipal government of Montevideo established an advisory unit for Afro-Descendent Rights in 2003.

The Contributions of Afro-Uruguayans to the Popular culture of Uruguay

The history of the contribution of Afro-Uruguayans to the development of Uruguayan popular culture parallels and occasionally converges with that of Afro-Uruguayan civic mobilization. In a nutshell, the candombes—public dances for their members—were one of the main duties performed by the African salas de nación in the first part of the 1800s. African musical elements (particularly the use of African drums and other percussion instruments) were combined with instruments, chords, and rhythms from Europe and the Caribbean (especially Cuba) to create a new musical form known as both tango and candombe in the 1860s and 1870s by the Africans’ children and grandchildren who were born in Uruguay.

Young white men got in on the action and made their own tangos and candombes in response to the success of this new, syncopated music. The comparsas, musical groups that marched in Carnival in February and March while playing music created specifically for those events, served as the means by which they accomplished this. The white comparsas paraded in blackface makeup and “African” outfits in an attempt to mimic their black models. The end result was a “troubling hall of mirrors,” in which white performers imitated black performers and black performers imitated white performers’ imitation of black performers, to use historian John Chasteen’s phrase.

Previously segregated black and white comparsas had merged into racially integrated groups by 1900, most of which were and still are predominately white today. They offer themselves to the people of Montevideo as sociedades de negros, or “black” candombe drummers, singers, and dancers. As a result, they have grown to be the most well-liked and praised aspect of Montevideo’s Carnival. However, the representations of black life they offer are rooted in prejudice from the late 1800s, going back at least a century. Blackness is portrayed as having a specific connection to the archaic powers of rhythm, dance, magic, and sex and in highly sexualized ways.

Politics and candombe have frequently crossed paths. Some of the most well-known comparsas have ties to the Colorado party; in Senator Alba Roballo’s 1960s campaign appearances, groups of candombe drummers joined her. The idea to establish the Day of Candombe, Afro-Uruguayan Culture, and Racial Equality as a national holiday was put out in 2006 by Afro-Uruguayan congressman Edgardo Ortuo.

Conceived as a Uruguayan version of similar commemorations in the United States (Martin Luther King Day) and Brazil (Black Consciousness Day), the Day of Candombe (celebrated on December 3) is intended to provide space for a day of reflection on racial conditions in Uruguay and the road remaining to be traveled to achieve true racial equality.  Whether the holiday will serve that purpose remains to be seen; but certainly it provides clear evidence, if any were needed, of the centrality of candombe and culture of Afro-Uruguayans in Uruguayan national life.