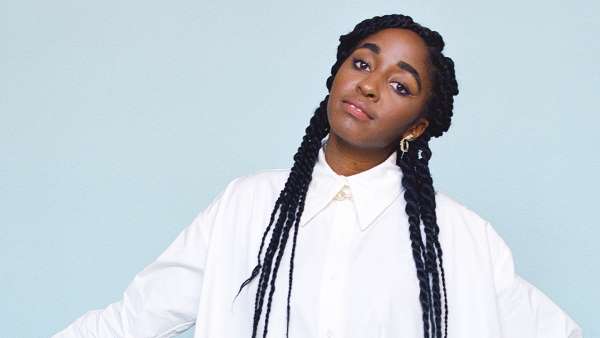 As both writer and performer, comedian Ayo Edebiri is leaving her mark on the Netflix animated series Big Mouth, which returned for season 4, and the upcoming second season of the Apple TV+ original, Dickinson. “It’s very exciting and very strange now that it’s all starting to roll out,” she tells ET.

Me irl: Animated me: pic.twitter.com/tJDH1XN5Wg

The news came after Slate shared she would no longer voice Missy, a biracial preteen, amid the country’s cultural reckoning and renewed Black Lives Matter movement in the wake of George Floyd’s death. The actress acknowledged that her “original reasoning [for taking the role] was flawed,” she wrote on Instagram in June, adding “that it existed as an example of white privilege and unjust allowances made within a system of societal white supremacy.”

Soon after, it was revealed that Edebiri, who auditioned for and eventually won the role, would first be introduced during the penultimate episode — a clever parody of the Jordan Peele film, Us, that showcases Missy’s continued evolution in season 4 — and take over the role full-time in future seasons. Edebiri describes the moment as “a baton pass more than anything else.”

A self-identified awkward Black girl, Edebiri is not just a natural fit for Missy, but she brings a level of authenticity to the character that was missing before and even harder to get around as the show, notably its writers, wanted to explore her Blackness. Just don’t expect Missy to suddenly be from Boston and start playing the oboe, Edebiri says, clarifying that they won’t be retrofitting the character to fit the comedian.

But for a series that started off about puberty, with jokes about erections and periods, it’s grown into a hilariously funny and nuanced exploration of gender, sexuality, and now, race. “As a viewer, it’s exciting because you see something that you loved kind of grow alongside you and just continue to set the bar higher for itself,” Edebiri says, adding that as a writer and performer on the show, “I feel like I’m in good hands.”