The Shocking Story Of The Black Woman Who Disguised As A Man To Become A Soldier! 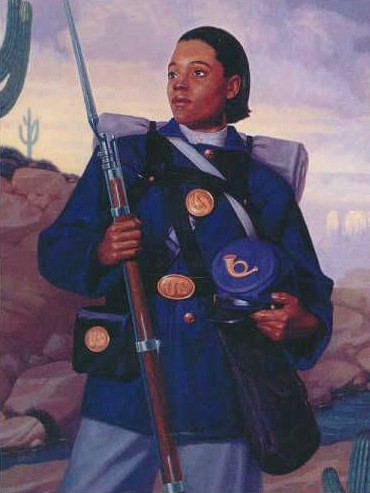 Cathay Williams was the first Black woman to enlist in United states Army.  She enlisted under a fictitious name and the only documented woman to serve in the United States Army, posing as a man.
Cathay Williams was born in 1844 to an enslaved mother and a free father.

During her adolescence, she worked as a house slave on the Johnson plantation on the outskirts of Jefferson City, Missouri.

In 1861, Union forces occupied Jefferson City during the early stages of the Civil War. Captured slaves at this time, were officially treated as illegally imported beings, and were forced to serve in military support roles such as cooks, laundresses, or nurses. Before her voluntary enlistment, at just 17 years old, Williams served as an Army cook and a washerwoman. In this role she accompanied the infantry all over the country. Williams served under the service of General Philip Sheridan; where she witnessed the Red River Campaign and the Battle of Pea Ridge.

Despite the prohibitive law against women serving in the military, Cathay Williams enlisted in the United States Regular Army under the false name of “William Cathay” on November 15, 1866, at St. Louis, Missouri, for a three-year engagement; passing herself off as a man. She was assigned to the 38th United States Infantry Regiment; after she passed a cursory medical examination. Two people were aware of her disguise and deception; her cousin and a friend, both of whom were fellow soldiers in her regiment.

During her two year stint in the military, Cathay Williams, primarily did regular garrison duties and there are no documented records that can verify that she saw actual combat.

Shortly after her enlistment, she contracted smallpox and was hospitalized. The effects of smallpox, the heat, or the years of marching, affected her and her body began to show signs of strain. Due to her frequent hospialization, the post surgeon finally discovered she was a woman and informed the post commander. She was honorably discharged by her commanding officer, Captain Charles E. Clarke on October 14, 1868. Though her disability discharge meant the end of her tenure with the Army, her adventure continued. She signed up with an emerging all-black regiment that would eventually become part of the legendary Buffalo Soldiers.

These units dotted the landscape of the American West and showed tremendous skill in a range of duties. They fought in skirmishes with Native Americans, escorted vulnerable wagon trains, built forts, mapped the territory, and protected white settlers; all with sub-par equipment.

For a while in her post-military career, Williams was adrift, while she moved around to recapture the stability granted by the Army. She headed to Fort Union in New Mexico territory with her original name to work as a cook. A brief marriage ended with the arrest of her husband, who had stolen money and horses from her. She also took on jobs as a seamstress and laundress under the name Kate Williams in Pueblo, Colorado – where her mother ran an orphanage; and Trinidad, Colorado.

The career of this young black woman, was unremarkable. She marched and performed duties conscientiously and stayed out of trouble. In an interview published in the St. Louis Daily Times on January 2, 1876, after her service, she recalled, “I carried my musket and did guard and other duties while in the Army.” She also boasted of having never been put in the guardhouse.

Although she was not the only woman to serve in uniform in her era, Cathay Williams was the only documented female buffalo soldier, and she seems to have kept her gender disguised for the longest period.

Cathay Williams story is an amazing story and a must read!