Haitian President Jovenel Moïse announced last Sunday, that the National Carnival 2021 will be held in Port-de-Paix in the North-West region of Haiti, on the Boulevard des Trois Rivières.

The announcement was made while Moïse was participating in a festival on the occasion of the patronal feast of the Immaculate Conception in the City of Port-de-Paix which was celebrated on December 8. The information has also been confirmed by Haiti’s Ministry of Culture. 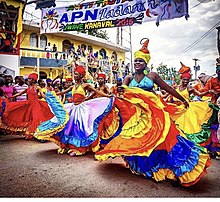 “The national carnival will take place this year in Port-de-Paix, on Boulevard des 3 Rivières. I decide to do you justice. You are considered to be forgotten by the Republic. Today I want the whole world to remember you. The main musical groups, that is to say, Sweet Micky, Djakout, T-Vice, must come to Port-de-Paix if they want to perform at the national carnival, otherwise, they cannot,” declared the President of the Republic.

Haitian Carnival is a celebration held over several weeks each year leading up to Mardi Gras.