NBA Star Stephen Curry, awarded a bachelor’s degree in the arts, and inducted into the Dawson College Hall of Fame 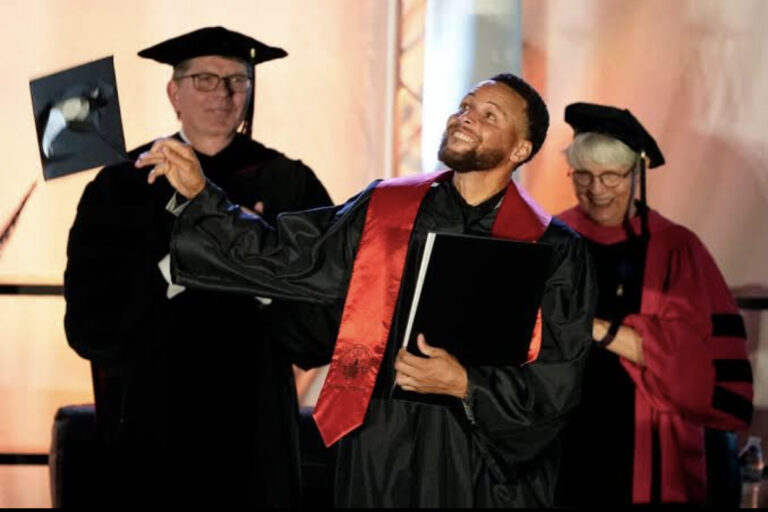 It would be a spectacular year if Stephen Curry won his fourth NBA title and his first MVP award in the Finals, but it looks as though those achievements weren’t enough for him.

13 years after leaving Davidson College to become an NBA player who would go on to become a Hall of Famer, the basketball phenom was recently recognized by his old college. The Golden State Warriors selected Curry with the seventh overall pick.

Stephen Curry graduated from Davidson University with a bachelor’s in sociology earlier this year, but his quest of an NBA title prevented him from attending the graduation ceremony. Wednesday, the institution in North Carolina gave him a special honor by allowing him to graduate.

The sharpshooter also the number he wore at Davidson—30, of course—retired, the first athlete in Davidson’s history

Curry was also inducted into Davidson College’s Hall of Fame.

“I get kind of awkward at times when I walk into this gym and see this many people showing up just for me and the celebration of what, you know, the graduation and the Hall of Fame induction and seeing my jersey in the rafters,” Curry said.

“But every single person that I got to play with, that coached me, help[ed] me when I was hurt and injured and trying to find ways to get back on the court. All the faculty and staff that supported me through my three years here. I really feel like this is why this matters so much.”

Stephen Curry just had to finish one semester, according to Davidson College, to receive his degree. Curry completed the courses with the help of many professors, including two from Davidson, one from Stanford, and another from UC Santa Cruz who taught Curry while they were both at Davidson.