Ndaté Yalla Mbodj: The Senegalese Queen Who Fought Against The French Colonization. 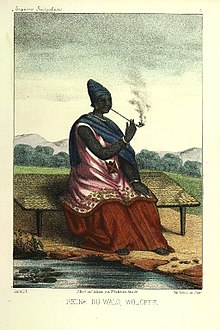 Ndaté Yalla Mbodj  was the last great Queen of Waalo, one of the four Wolof kingdoms of Senegambia located in what is now North-West Senegal.

During her reign, she fought against French colonization and Moorish invasion of her kingdom. In the 19th century, the Wolof queens Ndaté Yalla and her sister Ndjeumbeut Mbodj stood out as two of the most powerful women of 19th century Senegambian dynastic history.

In early 1847, she opposed the French authorities over free passage for the Sarakoles, who supplied the Island of Saint-Louis (a French colony) with cattle. In a letter deposited at the Senegalese National Archives the French claim that, the Queen and/or her people, going in contravention of the treaty that had existed between Waalo and Saint-Louis (Senegal), stopped a herd of 160 oxen that a resident of Saint-Louise (a French man) had bought from some Sarakole merchants and kept 16 of the best livestock for themselves, allowing only 100 to pass. The French went on to state that, the Queen can only be paid for passage after the goods have arrived in Saint-Louis. They then went on to threaten the Queen and asked that she return the 16 oxen which they say were in her possession, and if she refuse to do so she will be deemed an enemy.

On 18 June 1847, she wrote a letter to the French governor in the following terms:

“We have wronged no one. Walo belongs to us, that is why we guarantee the passage of livestock in our country. For this reason we charge one-tenth and we shall never accept any other thing. Saint-Louis belongs to the Governor, Cayor to the Damel, Djollof to the Bourba, Fouta to the Almamy and Walo to the Brak. Each of these chiefs governs his country the way he deems fit.

During her reign as Queen, she and her husband Maaroso Tassé (commander of her army) fought against the Moors of Trazar who were encroaching on her territory and against the French colonialist army led by General Louis Faidherbe – who has just been brought in to replace his predecessor Governor Protet. Their years of resistance against colonization resulted in attacks from 1854 and finally the Battle of Dioubouldy (or Diouboulou or Dyubuldu) in 1855.

This battle was the first real attempt by France to conquer the Senegambia and bring to an end the six main Senegambian Kingdoms.

After months of battle, the Queen refused to submit to French invasion and mobilized more forces in order to repulse the French coalition army.

The French responded by bringing new weaponry and a 1,5000 army personnel, some of whom he brought in from Algeria to supplement his forces. In addition to that, the French brought in 400 horsemen. Maaroso Tassé, a valiant warrior as he was, was unable to defeat the French with the army under his command.

The Queen, having be defeated, made a speech:

Today we are invaded by the conquerors. Our army is completely routed. The Tiedo [animist army] of Walo, valiant warriors though they are, have almost all fallen to the bullet of the enemy. The invader is stronger than we are, I know, but should we abandon Walo to the hands of foreigners?

— Ndaté Yalla Mbodj (31 January 1855)
The royal family of Cayor, requested that the royal couple move to Cayor for refuge and protection. They left for Cayor, and received protection from their relatives.
The French demanded that the royal family of Cayor hand them over as their prisoners, and if they refuse to do so Cayor would be deemed an enemy. The royal family of Cayor refused to do so and offered them protection. The Queen remained in Cayor for several years until her death in 1860.
Ndaté Yalla Mbodj, is regarded as a heroine in Senegambian history, and one of the most famous women of 19th century Senegambia. Along with several other African heroines, She played a crucial role in the struggle for African liberation. Oral historians have recorded her bravery, and she remains a symbol of female empowerment.
During her life and afterwards, Ndaté Yalla was a symbol of resistance against French colonialism. Queen Ndate Yalla Mbodj died in Dagana, where a statue erected in her honor still stands.
Credit: wikipedia
africa culture history Ndaté Yalla Mbodj senegal Senegambia
Share. Facebook Twitter Pinterest LinkedIn Tumblr Telegram Email
admin