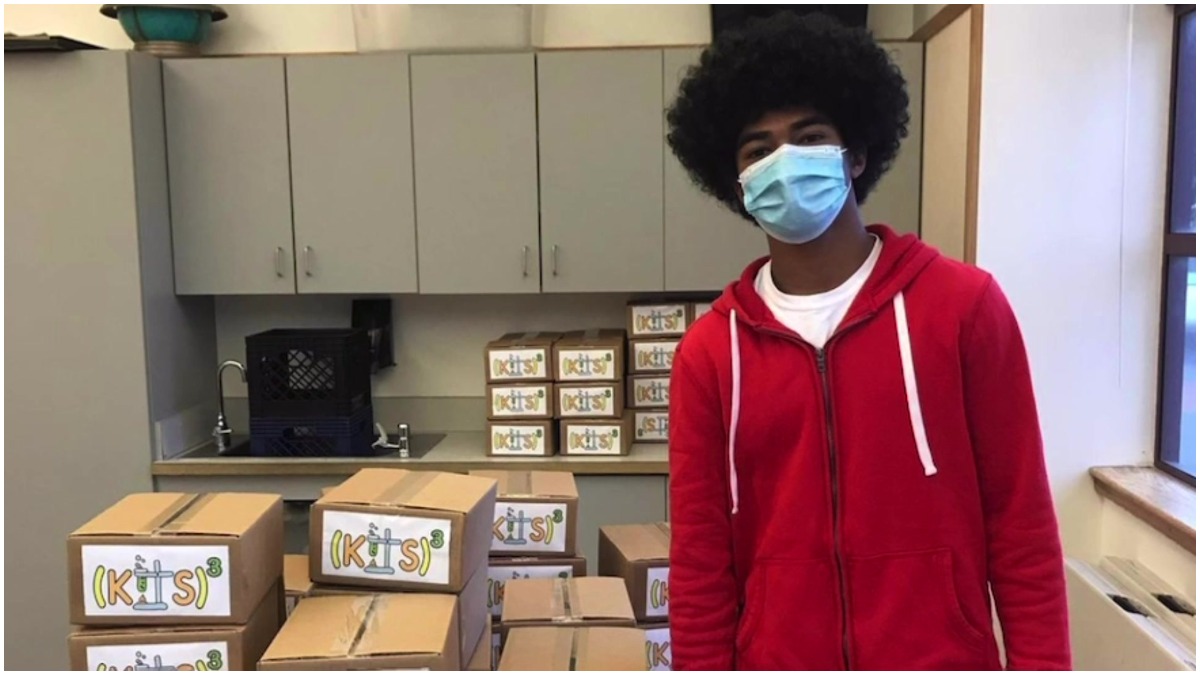 Getting into science is often difficult for some kids. It’s something Ahmed Muhammad learned quickly while babysitting his niece and nephew.

Muhammad is an 18-year-old senior from Oakland, California, who attends Oakland Tech High School. One day he asked his niece and nephew if they wanted to do science, and he was distraught by their reaction.

“I think Amir is like 6 or 7 and Ilah I think she just made 9. Whenever I babysit them, we do things like play chess, play video games, read books or watch TV or whatever. When I tried to do science with them, they were like, ‘No, I hate science. I’m bad at it.’

It sucked because I wanted to know why their confidence had been destroyed already at such a young age,” Muhammad said.

It was that moment that fueled Muhammad to create his nonprofit called “Kits Cubed” with a mission to introduce kids to science through fun, affordable and accessible means.

“I went into my room and I pulled out some science books. Then I went online and did some research and was able to design some science experiments for them to do at home. The materials consisted of just stuff we have around the house, and they loved it,” Muhammad said.

After witnessing their joy, he realized other children could benefit from it as well.

“First I was thinking I just wanted to get it to as many kids in Oakland as possible,” Muhammad said.

Muhammad said he first developed his love for science at a very young age.

He too used to be intimidated by it, but thanks to after-school and summer programs providing hands-on experiences, it piqued his curiosity.

“There was this camp in like third grade that was super influential. It was a summer program, summer engineering experience for kids,” said Muhammad.

During the global pandemic, he realized a lot of children were missing access to interaction with their peers and learning through those hands-on experiences.

“The long-standing absence of science in our school which has been exacerbated by the pandemic, that’s when I really felt like we needed some science kits in the hands of kids,” Muhammad said.

That’s when he took the $200 he had saved to create a website and begin creating science kits to sell, and eventually donate to kids in need.

“I had enough money to make the website and enough to put together like 10 or 15 kits. My initial goal was the joy that my niece and nephew felt. I wanted it to get to as many kids as possible,” Muhammad said.

And it did. Since he launched Kits Cubed in June of 2020, he’s sold more than 3,500 science kits, and he partnered with a local nonprofit which allowed him the ability to donate more.

“We were able to get physically sponsored by a nonprofit called Seneca Family of Agencies then I was able to write grants to different foundations. So it started with that $200 but then since then everybody’s pitched in,” Muhammad said.

Our first kit they designed was a rocket and they launch it, which is really cool. There’s also a plant maze in it, and a kaleidoscope so kids make a kaleidoscope. There’s a potato battery; that one is my favorite, they use nails and wires and potato to light up a light,” added Muhammad. “Like, it’s all simple materials. I want to show the kids that science is all around us and you can literally make it with popsicle sticks and rubber bands.”