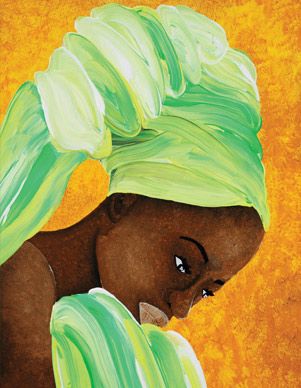 Today on our folk tales, we present to you the part 2 of the western African story, titled “The Woman With Two Skins.”

At night, everywhere was dark and no one could see another, she pulled off her ugly skin, and the king, being a powerful king, saw how beautiful she was, and was very pleased with her; but when the cock crowed Adiaha pulled on her ugly skin again, and went back to her own house.

This act was a continuous act, for for days and four nights. She takes off the ugly skin at night, and replace it before the cock crows . In no time, the people were surprised, especially the six wives of the king, Adiaha the ugly wife, conceived and gave birth to a son.

The king’s head wife became angry and jealous than ever; so she visited the voodoo man, and by giving him a large present convinced him to give her some charms which would make the king sick and forget his son. The king will have no choice but to visit the Voodoo man for help.

The king didn’t want to destroy his son, but his chiefs cajoled him to throw his son away, and said that perhaps in a year’s time he will get another son. So the king agreed, and threw his son into the river. Adiaha the mother of the child, grieved and cried bitterly.

One day, her father who didn’t like her condition, took her to a herbalist, the herbalist told Adiaha to go back to the king, which she did. The king recognised her, and requested that she returns back to him.

Unknown to them, Adiaha’s father, the spider, saw when the kings guard threw the king’s son into the river. The spider saved the boy’s life, took the boy home and the boy grew up very strong.

Adiaha who lived with the king, conceived again and gave birth to a daughter.  The jealous first wife also persuaded the king to throw the child away. It took a longer time to persuade him, but at last he agreed, and threw his daughter into the water too, and forgot Adiaha again.

But the spider was ready again, and when he had saved the little girl, he thought the time had arrived to punish the action of the jealous wife; so he went to the village youths and persuaded them to hold a wrestling match in the market-place every week. This was done, and the spider told the king’s son, who had become very strong, and looked like his father; the king, that he should go and wrestle, and no one would be able to stand up before him.

It was then arranged that there should be a grand wrestling match, to which all the strongest men in the country were invited, and the king promised to attend with his head wife.