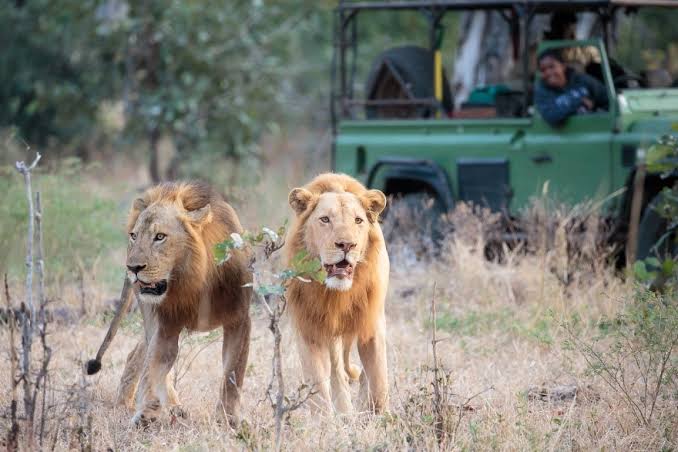 We have listed and reviewed the 10 best safari tours in Southern Africa in this article.

Choosing the best safari destination might be a challenging decision.

We still recall our first days in South Africa, when we just traveled to what we believed to be the closest national park to Johannesburg.

That was Kruger National Park, and self-driving across it turned out to be one of the best decisions we made in Africa.

On a self-drive safari, we spotted an abundance of wildlife and had no idea what we were doing.

We’ve now visited every major park in Southern Africa and have several tales of encountering African wildlife in its native habitat.

So where are the 10 best safari tours in Southern Africa?

When it comes to the top safaris in South Africa, we must begin with the beast, Kruger National Park.

This park is the Disney World of African national parks. It is the size of Israel and is so well-known for safari that it is simply called “The Kruger,” not Kruger National Park.

It is unlike any other National Park in the world in terms of game density and is renowned for it.

The park is easily accessible due to well-managed rest camps that provide guests with everything they need and a broad network of well-maintained roadways.

If you’re searching for a safari that you can arrange and drive yourself, Kruger National Park is the place to go.

Outside of the National Parks in South Africa, there is much more to see.

The only disadvantage is the volume of tourists. The Kruger pulls in additional staff because to the fact that things might get a little congested at times.

However, the nearby private game reserves are home to several opulent lodges that offer all the game without the people.

Without a question, the best value safari on this list is in Etosha National Park. The park boasts some of Southern Africa’s best game watching.

It does, however, come at a cost, as Etosha is the least visually appealing of all the National Parks on this list, being dominated by a bleak salt pan.

The area’s scarcity of water is also a saving grace, as animals congregate around drinking holes, making them easier to identify.

The quality of the roads, the absence of large crowds, and the general ease of a Namibian road trip all contribute to the country’s inclusion on the list of top places to safari in Southern Africa.

National parks in Namibia are administered by NWR; admission to the park is just N$80 (USD6) at the time of publication.

Etosha does not have a large number of lodges, which means that the park is never overcrowded.

Even with our best animal sighting, we only encountered three other vehicles, and that was near a lion carcass with hyenas, jackals, and vultures hovering in anticipation of a meal.

If the same scenario happened in Kruger, there would be approximately 50 automobiles.

It’s unsurprising that we believe this to be one of the 10 best safari tours in Southern Africa.

Zimbabwe was formerly “THE” safari destination. While such may no longer be the case as a result of recent political conflicts, this does not mean that the land or wildlife have vanished.

Hwange National Park is Zimbabwe’s largest park, with an area almost equal to that of Belgium.

Despite decades of control, Hwange remains one of the best safari destinations.

Although it has seen its share of ups and downs, the game density remains one of the greatest in Southern Africa.

Therefore, pack your favorite camera for safari and brace yourself for some incredible encounters.

The park itself has a water scarcity issue, but because to ongoing conservation efforts, 60 watering holes located around the park offer year-round water for the animals.

Additionally, Hwange is home to one of the greatest elephant populations in Africa.

Moreover, they are recognized for their thriving lion population, which was previously home to Cecil the lion.

Each dawn, listen to the sounds of fish eagles and witness enormous crocodiles disappear into the Chobe River’s depths.

The Chobe is renowned for its enormous elephant population, which is said to be the greatest in Africa. The park encompasses a substantial portion of northern Botswana, ending at the Chobe River.

We saw the park in two distinct ways: on a houseboat floating down the river and at a luxury resort with stilted villas.

There are numerous lodges along the river that provide safari visitors the opportunity to embark on river safaris.

Visitors can observe Africa’s most elusive predator, the wild dog, as well as a variety of other predators.

There are just a limited number of areas in Africa where the wild reigns supreme.

Nothing comes close to what may be the best safari spot in all of Africa. The Okavango Delta spans Northwestern Botswana, consisting of a patchwork of land, marsh, lake, and sand.

The delta’s landscapes vary in feet, not hundreds of miles.The Okavango Delta is undoubtedly the most inaccessible region in Southern Africa, as well as the most expensive.

Botswana has chosen a high-cost, low-impact tourism paradigm, resulting in an environment of five-star resorts with few guests.

Which results in once-in-a-lifetime safaris for those fortunate enough to finance a delta safari (though it is possible to self camp).

All these and more makes this park one of the 10 best safari tours in Southern Africa.

If you want to be close to the Okavango, make your way to Khwai Concession!

South Luangwa National Park is renowned for its bush hikes and leopards, an attractive combination for those seeking up-close encounters with some of Africa’s most dangerous species.

African buffalo, lions, or elephant tracking is an exhilarating adventure that immerses you in the forest.

Additionally, a healthy dosage of lodges are accessible along the park’s southern border along the Luangwa River.

There is something for everyone in this collection.

If you’re going for bush hikes in the park, we can’t stress enough how important it is to invest in a nice pair of safari boots!

Are you looking for the best safari experience in South Africa? You must visit Ants Nest.

We’ve had some wonderful safari adventures over the years, but this was our first time riding through the bush on horseback.

Thus, during the course of a long weekend away from Johannesburg, we were treated to some delectable food, wonderful lodging, wildlife, and some breathtaking horseback riding.

Although this was not our first time on a horse, we had never ridden at a canter through a private reserve.

Riding a horse up to a giraffe or other antelope provides a whole different safari experience than viewing them from a game viewer.

The safari animals consider you and your horse as a single animal, rather as a human and an animal, and allow you to come up close and personal. There is no motor or exhaust noise here — only pristine nature.

The reserve is home to 40 different species of animals, including zebra, sable, roan, wildebeest, eland, rhino, porcupine, and giraffe.

It is also not an official resident, yet we did come across leopard tracks due to their propensity to scale fences.

The Kalahari’s red sands are a visual treat. Its huge sweep of earth takes you entirely. Sunsets here take on a new dimension as the entire sky is lit on fire.

The land is stained with rust-colored sand, while the horizon is dotted with green flora.

By lunchtime, temperatures have risen to up to 50C, and the scorching sun has scorched the beach. Purchase a safari hat to offset the heat.

The crimson sandstorms that begin in the Kalahari reach high into the earth’s atmosphere and have the potential to influence worldwide weather patterns.

Despite this, a variety of desert-adapted animals thrive in the Kalahari.

Lions, ostriches, meerkats, cheetahs, oryx, zebra, and even the desert-adapted giraffe can be spotted.

It is an African safari experience unlike any other.

We had the good fortune to see the Kalahari from both Namibia and Botswana.

It’s difficult to imagine a more idyllic setting for a safari than African Bush Camp’s own concession in the larger Linyanti region, which is sandwiched between the Greater Chobe National Park and the Okavango Delta.

It all contributes to an ecosystem known as the Linyanti Channel.

This relatively isolated location of Botswana has risen in prominence over the years due to the animal viewing opportunities it provides.

We’d heard it was a wonderfully magical location to visit for safari, and it was.

Safari activities such as game drives, bush walks, mokoro rides, night drives, nature walks, bird viewing, and a magnificent helicopter flight are all available to the fortunate few who get to visit this wonderful section of Botswana.

Guests are virtually guaranteed a wonderful safari here due to the high wildlife density and the area’s relative isolation from man.

It is home to 10,000 animals representing 60 different species, including the legendary Big Five.

While many people associate safari with Africa’s National Parks, there are several excellent private game reserves, such as Madikwe, that guarantee an amazing safari experience.

We spent four amazing days here and were treated to sightings of rhino, leopard, elephant, and everything in between on our first game drive out.

It’s an excellent substitute for Kruger National Park and is located within a four-hour trip from Johannesburg.

What to pack when going on a safari to Southern Africa

While packing appropriate safari attire is always a good idea, it is never required, as you can wear whatever you like. Additionally, we discuss the best women’s safari clothing!

We never travel without travel insurance, and you should not either.

In a new place, you never know what can happen, and it’s important to be prepared.

Many people find it intimidating to go alone in Africa. There is no need to fear, as overland tour providers will show you the ropes and ensure you have a good time.

A well-made hat is both fashionable and utilitarian.

There is minimal shade during the peak dry season, and the UV rays are fierce, potentially burning the unwary traveler.

A fantastic daypack for vacation is an excellent idea for carrying your belongings on wildlife drives and bush planes. Alternatively, you may experiment with a safari backpack.

Pants made of lightweight synthetic material are useful to have in your pack.

It’s what we wear the majority of the time while traveling in Africa because it’s comfortable, antibacterial, and protects our legs from mosquitos (malaria).

While on safari, you’ll want to wear a safari shirt. They are compact and repel insects.

Additionally, they appear great in photographs and blend nicely with the surrounding landscape!

When traveling, it’s sometimes pleasant to hold an actual book in your hands.

We recommend purchasing a Lonely Planet guide to help you navigate the wild lands at night.

Are you planning to go on safari? You should try carrying the Robert’s Southern Africa Bird Book.