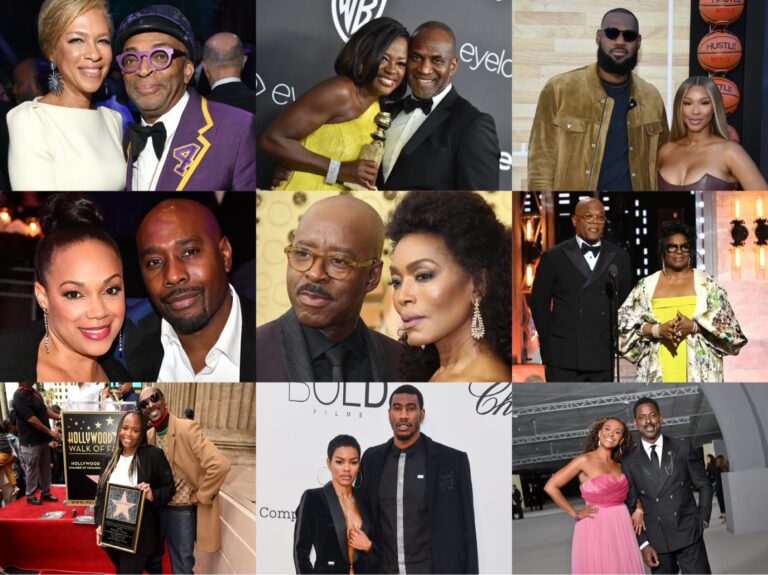 These black celebrity couples and their relationships/marriage are worth highlighting and they are listed in no particular order. You may be familiar with some or all of them.

68-year-old Pauletta Pearson and 64-year-old Denzel Washington, first met in 1977, on the set of the movie Wilma, and started dating shortly afterwards. Denzel described their first date in a Valentine’s Day (!) interview with Jimmy Kimmel and also recalled their very first meeting on Live with Kelly and Ryan. “I met her then, but I didn’t meet her then,” he explained of their time on the set. “I saw her then.”

About a year later, Denzel went on to explain, he was at a party where Pauletta also happened to be. “I had talked at that party about going to see a play. I went to see the play, and at intermission the lights came up and she was sitting [there]. She said she just happened to go see the play… I’m getting in trouble as I speak!”

After 3 marriage proposals, Denzel and paulletta, one of the most recognized black celebrity couples got married in 1983. Together, they have four children, John David, Katia, Malcolm, and Olivia.

Pauletta has continued to build her acting career while Denzel has since become an A-list celebrity. She has appeared in films like the 1993 Philadelphia, which received an Oscar nomination, and Spike Lee’s 2017 TV series She’s Gotta Have It.

The couple are parents to four children ; the oldest, John David, age 34, is an actor who most recently appeared in Spike Lee’s Oscar-nominated BlacKkKlansman. While 28 year old twins Olivia and Malcolm, are beginning their own Hollywood careers after studying acting and filmmaking, respectively, their older daughter Katia, 30, is also an actor.

Desmond Tutu officiated the ceremony in South Africa where Pauletta and Denzel renewed their vows in 1995.

Spike Lee and his wife, Tonya Lewis Lee, are one of Hollywood’s most prominent black celebrity couples. Over the past few decades, the two have created and collaborated on multiple film projects all while raising two children and continuing to speak out on important social justice issues through their art and philanthropy.

According to Essence, the two first connected at a 1992 Congressional Black Caucus dinner. Spike’s genuine desire to get to know Tonya was immediately apparent.

“We walked past each other. Spike circled back around and proceeded to give me the third degree. ‘Are you an actress? A model? A singer? Who are you here with? What do you do? Do you have a boyfriend?'” she recalled to the outlet.

At the time, Tonya was working as a corporate lawyer. Intrigued with Spike’s creativity, the two reportedly “unleashed their creative sides together” and bonded over their shared love of art. In 1993, just one year after meeting, the two walked down the aisle.

Morris Chestnut and Pam Byse are one of the black celebrity couples that have been pretty private about their marriage. They have been married since 1995 and have two children, Grant and Paige.

“We met in a club. I was doing something in Atlanta and at the time it was Deion Sanders, Ron Grant and a dude named Tiny Lister explains Chestnut. “I was doing a tv movie out there and I went to the club. Tiny was living in Atlanta. He knew the ins and outs of the city, and he was just like, Mr. Atlanta.

We were hanging out in the club and he told me about this chick, that chick, whatever. Then I saw Pam, who is my wife, and I said, ‘What’s up with her?’ He said, ‘Nah, man, don’t waste your time. She don’t give anybody no play.’ So as soon as he said that, I was like, ‘That’s the woman I need to go holler at.’”

Julius Tennon, the Prince Charming Viola Davis longed for, finally showed up in her life a little more than three weeks after her prayers. The couple adopted a daughter before getting married in 2003.

They are one of the black celebrity couples who met on a movie set. On the set of the medical drama television series City of Angels, Davis and Tennon, fell in love and have been married since 2003. The pair now has many things in common, including their own production company, JuVee Productions, and an adopted daughter named Genesis. Davis and Tennon are leading initiatives with more substantial roles for Black performers and greater representation behind the scenes in an effort to transform the film and television industries.

According to the interview she gave to Page Six, Davis “was the loneliest woman in the world” back in the early 2000s. She was advised by a friend to “pray” for the ideal partner, which she did.

“I said I wanted a big Black man from the South who looked like a football player, who already had children, who maybe had been married before,” she said. “3 1/2 weeks later I met my husband.”

Savannah James and LeBron James have been dating since their high school years in Akron, Ohio. They got married in 2013 and  Lebron “Bronny,” Bryce, and Zhuri are their three children.

The two have been in a long-term relationship since the early 2000s  are one of the black celebrity couples who met in high school.

LeBron had been chosen to join the basketball team at St. Vincent-St. Mary High School, where he was a 17-year-old student. Savannah, 16, went to the rival high school even though she was born and raised in the same Ohio city as LeBron. When a mutual acquaintance informed Savannah that LeBron had requested her phone number, the teenagers came into contact.

“I’m like, ‘Um, nope. I’ll take his number,” she told Cleveland Magazine in 2018. “One day I’m sitting around — I was probably bored or something — and I’m like, ‘Oh, I forgot! I have this number for this guy that I can call. He seemed interested, so let’s see.’”

Courtney B. Vance and Angela Bassett

In October 1997, Courtney B. Vance and Angela Bassett, two adored actors, tied the knot and just celebrated 25 years of wedded happiness. They are parents to Bronwyn and Slater, their identical twin children.

They are one of the black celebrity couples who are regarded as Hollywood icons. Both their marriage and their acting careers have endured for a long time.

Angela and Courtney got hitched on October 12, 1997, and have been together ever since. Fraternal twins Slater and Bronwyn were later born to them in 2006.

The actors initially met while attending the prestigious Yale School of Drama. During a 2007 appearance on The Oprah Winfrey Show while promoting their book Friends: A Love Story, Angela stated that during their time at Yale she found Courtney to be “alluring.” That said, Courtney admitted that he didn’t remember his wife, but the two reconnected years later while working in Los Angeles after Angela’s Oscar nomination for the film What’s Love Got to Do With It.

In 1997, Snoop Dogg wed Shante Broadus, his high school sweetheart. Due to their insurmountable disagreements, they divorced in 2004, but they later remarried in 2008. Along with three grandchildren, they have three children: Cordé, Cordell, and Cori.

The former Death Row Records rapper claims that his wife of more than two decades, Shante Broadus, is the best person to be trusted with carrying on his legacy.

Together, they have endured numerous adversities such as label splits, rivalry between East and West Coast rappers, Snoop’s murder investigation in the early 1990s, the birth of Snoop’s fourth child from a relationship outside of their marriage, and a public split that occurred after more than 15 years of marriage. The fact that Shante is still standing by the rapper is not lost on him.

“That’s my backbone, that’s my heart and my soul, that’s the one that I love the most, that I trust the most,” the “Drop It Like It’s Hot” rapper told GQ in a December feature story discussing his 30-year career in hip-hop.

Teyana Taylor, a singer and actress, married NBA star Iman Shumpert in 2016. Following Iman’s NBA draft selection in 2011, they first connected at a party. They have two children, Junie and Rue. They also feature in a reality show together.

The multi-talented artist, actress, and filmmaker and the NBA champion initially connected at a party in 2011. The fact that Taylor was seeing someone else at the time meant that their relationship started out as a platonic one. After their friendship developed into something more in 2013, they became inseparable.

Shumpert popped the question in 2015 during their baby shower at the Museum of Contemporary Art in Cleveland, Ohio, and they officially tied the knot in 2016.

Regarded as one of the hottest black celebrity couples, they celebrate their relationship on Instagram often and have spoken highly of each other in interviews. “We empower and push one another to be better versions of ourselves all across the board,” Taylor told Ebony in April 2022. “I love that our relationship goes beyond just support — we hold each other accountable to be greater.”

One of entertainment black celebrity couple, Samuel L. Jackson and LaTanya Richardson Jackson are still so much in love since meeting as Morehouse and Spelman as students in 1970. They are not only married but have worked together on several acting projects. They also have one daughter, Zoe Jackson who is an Emmy-winning reality TV Producer.

The power couple have been married since 1980. As LaTanya told PEOPLE, it’s not just loving that kept them going but a pact they made to stay together.

“In the beginning, we always said the most revolutionary thing that Black people could do was stay together, raise their children with the nucleus of having a father and a mother, since everybody likes to pretend that that’s not the dynamic of the African American family. That it’s just children out here being raised by women, which we know is false,” said LaTanya. “In order to change that narrative, we made a decision to say, ‘We are going to stay together no matter what. We’ll figure it out.’ “

Another Black celebrity couple who are both Actors, are  Sterling K. Brown and Ryan Michelle Bathe who first met in 1998 as students at Stanford University and eloped in 2006. They have worked on screen together a few times and have two children, Andrew and Amaré.

During an appearance on The Talk, Brown revealed that the couple dated on and off in college before eventually calling things off after they graduated in ’98. “We broke up for three and a half years before we came back into each other’s lives,” he explained.

After meeting in 1998 and eloping in 2006, they threw a larger wedding a year later.