20 Year Old Zimbabwean Medical Student, Malone Mukwende, Is Writing A Book To Solve The Problem Of Little Or No Information On Health Symptoms Of Dark Skinned People 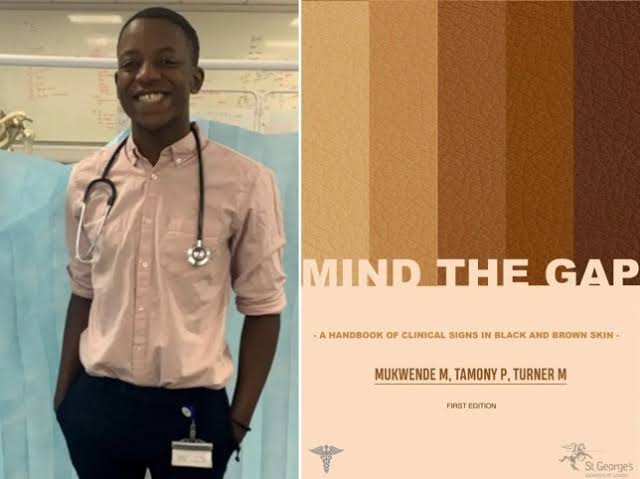 It’s so important that we demand inclusivity in all places, but especially in the medical field, where it could be a matter of life or death. Malone Mukwende  A 20-year-old medical student found himself repeatedly asking the same question during his studies; “But what will it look like on darker skin?”

Now, Malone Mukwende is publishing a book to answer that question, the Washington Postreports. “I noticed a lack of teaching about darker skin tones; and how certain (medical) symptoms appear differently in those who aren’t white,” said Mukwende, who recently completed his second year of study in the medical program at St George’s, University of London. 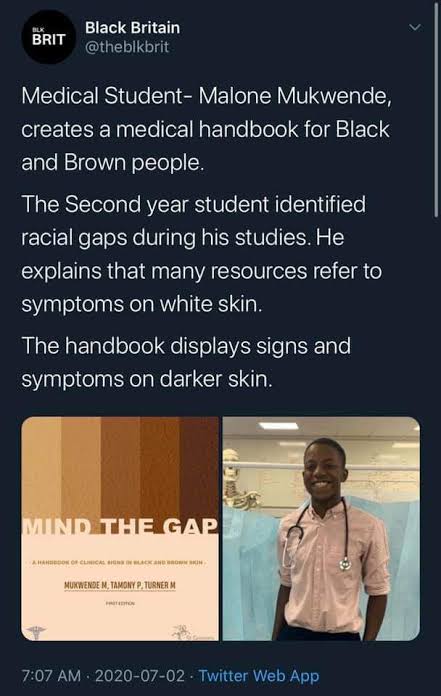 When talking about rashes, bruises, blue lips or other common physical reactions; “it was clear to me that certain symptoms would not present the same on my own skin,”; said Mukwende, a native of Zimbabwe.

“I knew that this would be a problem for patients of a similar skin tone to mine; or of a darker skin tone in general,” Mukwende said.

There weren’t any images to highlight the difference and students were not instructed on the correct terminology; to describe conditions that appear on darker skin, Mukwende said.

“I knew something needed to be done to address the situation,” said Mukwende, who added that he suspects most medical schools worldwide face the same problem. “I wanted to create a universal tool.”

However, With Mukwende at the helm, he and a few lecturers came up with the idea to write a book called; “Mind the Gap: A Handbook of Clinical Signs in Black and Brown Skin.”

Mukwende’s inspiration for the name of the handbook came from the London metro system, where warning signs say; “mind the gap” to alert passengers to take caution while crossing the gap between the train and the station platform.

Also, the manual will feature images of common clinical signs; along with descriptors and suggested language for healthcare workers to learn and use.

“It’s really about the words we use,” said Margot Turner, a senior lecturer in diversity and medical education working with Mukwende. “We are looking to decolonize the curriculum and make sure the medical education is reflective of everyone.”

Furthermore, Mukwende’s ultimate plan for the manual is to make it a “live document,”; whereby clinicians, medical students and patients can actively contribute their own images and descriptions.