A Former Denver Broncos wide receiver Demaryius Thomas, whose desire was to achieve what he called “everyday greatness,” has died at age 33, according to police reports. Thomas was found dead in his home on Thursday night and  Preliminary reports, indicated Thomas’ death might have resulted from a medical issue.

LaTonya Bonseigneur, a first cousin who grew up with Thomas, so close they considered themselves siblings, told The Associated Press that the family believes he died from a seizure.

“He had been suffering from seizures for over a year, and we believe he had a seizure when he was showering,” Bonseigneur said early Friday. “We’re not sure when he died. We just spoke with him yesterday.”

Former teammates also noted Thursday night that Thomas might have been having seizures in recent months.

The Broncos released a statement early Friday, mourning the loss of “an incredible player and a special person.”

“We are devastated and completely heartbroken by the sudden, tragic passing of Demaryius Thomas,” the Broncos said. “D.T. was beloved by our entire organization, his teammates and coaches, and our fans. Recently retiring as a Bronco, we were very much looking forward to celebrating Demaryius for years to come; as one of the greatest players in franchise history.”

The Broncos went on to add; “Demaryius’ humility, warmth, kindness and infectious smile will always be remembered by those who knew him and loved him.”

Demaryius Thomas, would have turned 34 on Christmas. He had earlier announced his retirement from the NFL in June with a short video with a peace sign and his characteristic smile. 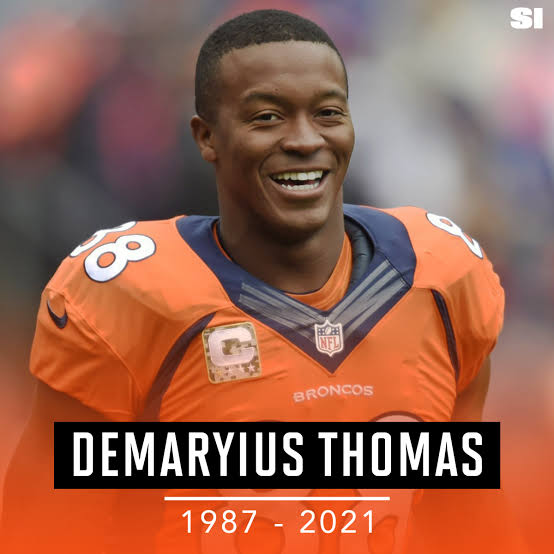 According to Espn, Hall of Fame quarterback Peyton Manning, who played with Thomas for four seasons, also released a statement early Friday.

“DT was a better person than he was a player, and he was a Hall of Fame player,” Manning said. “That tells you how good of a person he was. He treated my kids like they were his own. He was there for every teammate’s charity event. … Absolutely devastated.”