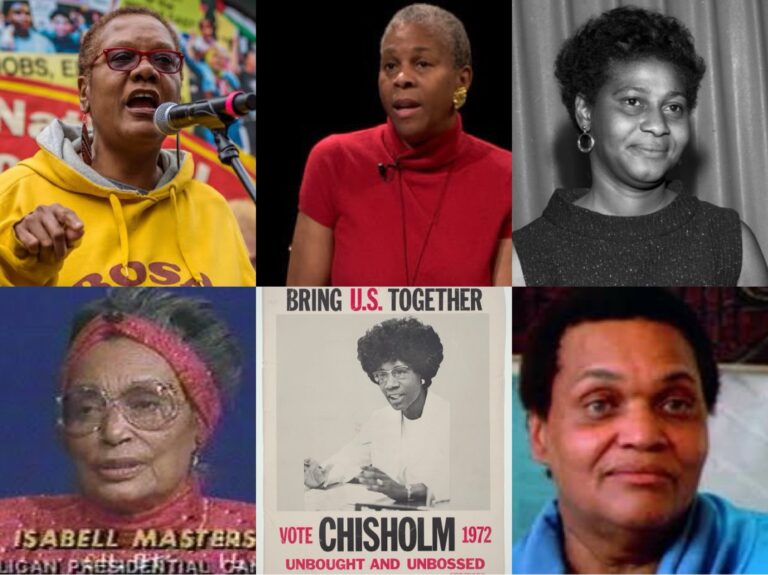 A Black woman is yet to secure the presidential nomination ticket of any political party in the United States, especially Democratic Party’s nomination for president, despite the fact that a woman has made it onto the presidential ticket for the general election. However, this does not imply that no black woman has tried and with varied degrees of success. This article highlights 6 Black Women Who have Run For the US Presidential race.

Numerous Black women have run for president as representatives of the Democrats, Republicans, Communists, Green Party, and other parties. Get to know some of history’s presidential candidates who were black women.

“As a woman of color, you cannot let the outside world define who you are because if you do, you won’t do or be anything,”-Shola Lynch

Since 1968, several Black women have entered the race for the highest office in the nation, here are 6 of them.

The first Black woman to run for president was Charlene Mitchell, not Shirley Chisholm, as has been widely and wrongly stated. At the age of 38, Mitchell ran for president in 1968 on the Communist Party’s ticket alongside Michael Zagarell, the organization’s national youth director. Although Mitchell only ran in two states, her campaign contained proposals to combat racial and economic injustice.

Mitchell had a political interest at a young age and was exposed to several organizations because of her parents’ engagement. When she was 13 years old, she received an invitation to an American Youth for Democracy meeting, and this was the first group she joined. She joined the NAACP Youth Council and eventually the NAACP shortly after. The NAACP forbade Communist members in the 1950s.

In order to fight racial injustice and segregation in the Windy City, Mitchell coordinated sit-ins and pickets as a member of numerous organizations that battled for causes ranging from anti-police offenses to Black unity and empowerment. She participated in her first picket in Chicago to protest the Windsor Theatre’s segregation of Black and White patrons.

Twenty-two years later, Mitchell announced her candidacy for president alongside Communist Party National Youth Director Michael Zagarell. Only two states put the candidates on the ballot. Mitchell’s tenure in politics would endure beyond that year. She unsuccessfully campaigned for U.S. senator from New York as an Independent Progressive in 1988, falling to Democrat Daniel Moynihan.

According to Mitchell, “At the time of the Second World War, [the North Side] was the heart of the pro-fascist, racist, anti-labor movement in Chicago. My parents were working people. We were anti-fascist and pro-civil rights. We walked in picket lines. The Communist Party was on our side; when I was 16, I joined.”

Chisholm ran for president four years after Mitchell with the motto “unbought and unbossed.”After serving in the New York State Assembly, she had already achieved historical significance when she was elected as the nation’s first African American congresswoman in 1968. Chisholm aimed to support women, low-income individuals, and other underrepresented groups during her campaign. Due to her background in education, she also gave priority to issues relating to the employment and educational sectors.

Shirley Chisholm campaigned as a Democrat, in contrast to many of the women on this list who ran for a third party.

Chisholm was born in Brooklyn, New York, on November 30, 1924. From 1927 until 1934, she lived in Barbados with her grandmother and attended a British school. She did exceptionally well in school and eventually graduated with honors from Brooklyn College in 1946 and Columbia University in 1952. Before being chosen to serve in the New York State Legislature in 1964, Chisholm worked as a teacher and educational consultant.

As the first Black woman to serve in Congress, she won the election and was subsequently elected to the House of Representatives in 1968. She would participate in the Rules Committee, the Committee on Agriculture, the Committee on Veterans’ Affairs, the Committee on Education and Labor, and the Committee on Organization Study and Review. She was a founding member of the National Women’s Political Caucus and the Congressional Black Caucus, two organizations that continue to be strong forces for change today.

“She realized at a certain point that nobody’s going to give her an opportunity unless she makes the opportunity happen for herself, and she could do that because she had been employed as a school teacher, she had saved money and had a stable home life, and she was supported by a group of political activists in her political district,” Lynch says. But, she adds, Chisholm’s success in politics would not have happened without the social changes that the civil rights movement had fostered. One of the most influential black women, Shirley Chisholm died in 2005.

Community organizer and civil rights advocate Margaret Wright campaigned on the People’s Party ticket in 1976, following Shirley Chisholm’s controversial presidential campaign. Wright, a former factory worker who served as the Black Panther Party’s minister of education, was passionate about topics including racial equality, labor rights, and education reform however in 1996 she passed away.

Just like many if not all black women in the US, Wright had faced discrimination all her life and intended to continue to fight for an end to inequality as president, as she had been doing as an activist and leader for years. Even as a civil rights activist rallying for racial equality, Wright was discriminated against and dismissed for being a woman. During her speech announcing her campaign for the presidency, she famously said:

Education reform was a top goal for her platform. She was dedicated to increasing the diversity of African Americans in schools and colleges, and she was frequently detained for planning and taking part in rallies and demonstrations aimed to expose institutionalized racism. Wright also intended to concentrate on changing the nation’s capitalist economy, which she said harmed Americans in the working and middle classes, into one that more closely mirrored socialist ideals.

Also on the list of black women who ran for president is Educator Isabell Masters who started her own political party, called Looking Back. She went on to  run during the 1984, 1992, 1996, 2000 and 2004 presidential campaigns. Masters’ five presidential campaigns are the most for any woman in U.S. history.

She ran as a Republican party candidate during her first three elections. She represented the Looking Back Party beginning in 1992. But despite her intention to run for president six times, Masters did not publicly campaign for each of those occasions or even be on the ballot in the majority of elections.

Religion had a significant role in Masters’ platform as a self-described evangelist. Uncertain of what it stood for and opposed, the Looking Back Party was a transient third party. However, Masters frequently discussed ways to eradicate hunger in America. 2011 saw her demise.

The Workers World Party was founded in 1959 by a group of communists led by Sam Marcy. This party describes itself as a Marxist-Leninist party dedicated to fighting for social revolution. Its goal is to bring progressive movements to a global stage of recognition and unite against the “capitalist 1%.” The official Workers World Party website elaborates on this philosophy, saying:

“We envision a world without … the racism, poverty, war and mass suffering it promotes and maintains.”

Moorehead is still active in politics as of 2022 and writes for Workers World Party publications.

Lenora Fulani, a psychologist, was the first woman and African American to be on every state’s ballot when she campaigned for president in 1988. As a result, she received more votes for president than any other woman had in the past.

Fulani got affiliated with Newman’s pro-socialist progressive party, the New Alliance Party, when it was launched in 1979. This party was established to represent underrepresented groups and unite them in their quest for independence from the Republican and Democratic Parties.

Of joining an independent party, she explained:

“My own involvement in third party politics was based on wanting to create a way out of being essentially held hostage to a two-party system that was not only hostile to [Black Americans] but hostile to the democratic participation of all the American people.”

On the NAP ticket, Fulani ran for governor of New York in 1990 and lieutenant governor in 1982. She entered the 1988 presidential election. She made history by becoming the first Black independent and female presidential candidate to be listed on every state’s ballot in the United States. She finished last but ran again in 1992, asking White independents for support this time.

One of the most influential black women in American politics, Fulani is credited as having a significant impact on politics despite not being elected by fostering the cooperation of Black leaders and White independents. She aimed to separate African Americans from the Democratic Party and encourage the general public to think critically and beyond partisan lines and ideological divides. She remains involved in politics till date.