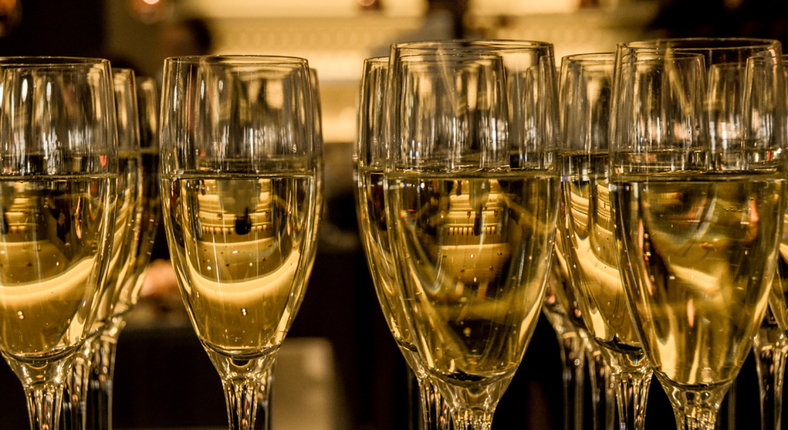 One of the world’s greatest party capitals, Lagos is teeming with new nightclubs and the rich who think nothing of spending as much as $50,000 on drinks per night.

It’s 3AM on a sweltering Thursday in Lagos and Crossroads at the Eko Hotels & Suites is packed to the rafters. Nigeria’s leading Tex-Mex restaurant and bar, it’s an edgy, happening hotspot on any given weeknight.

By the time we arrive, the live band’s set is over and the in-house DJ is pumping up the volume. The venue is teeming with pub-lovers from all nationalities and races clinking glasses and mixing together under the strobe lights. Suddenly, the music stops and a 70s rendition of ‘happy birthday to you’ fills the smoky night air, followed swiftly by a clutch of waiters appearing with a cake they then present to an unsuspecting roisterer and her noisy friends.

The manager instantly offers free tequila shots to the group and with that, the DJ is back at the deck and the party continues. Tonight, there seems to be a special launch event for premium champagne brand Veuve Cliquot Rosé and true to Lagosian form, bottles, lit with sparklers, are expertly maneuvered through the crowd to revelers just warming up for a long, unforgettable evening. Crossroads adds a new world-spin to the non-conforming millennial habits of dinner at midnight and dancing until dawn.

Elsewhere in the city, similar scenes of revelry unfold.

The Nigerian city is one of the world’s greatest party capitals and the gentrified Victoria Island is the hedonistic heartland of Lagos’ nightlife scene. It’s the second fastest-growing city in Africa, with a population of about 21 million, and with Victoria Island home to the highest concentration of high-net-worth-individuals anywhere in the world.

According to a recent McKinsey report, Africa has the world’s youngest population. More than 50% of its people are under 20 years old, compared with 28% in China. The 16 to 34 age group now accounts for roughly 55% of income. And with that comes an insatiable appetite for alcohol. In 2017, champagne consumption in the West African country was estimated to reach 1.1 million liters, according to a Euromonitor report.

“Champagne consumption is part of the culture in Lagos. It is not a Lagos party if there are no champagne bottles being popped. It has actually turned into a competition where clubbers try to out-pop each other,” says local pub promoter Paul Yusuf.

The Euromonitor report also uncovered that Nigeria had the fastest-growing rate of new champagne consumption in the world, second only to France, and ahead of rapidly growing Brazil and China, as well as established markets such as the United States and Australia. That accounts for about $50 million spent on bubbly and still rising each year. A surprising feat for a country where about 65% live on less than $1 a day.

“With increasing wealth inequality, it is such a shame that we throw large sums of money away on frivolous activities instead of helping each other to come out of poverty,” says Adekunle Omaye, an economist in Abuja.

Nigerians’ love of big spending has also attracted attention worldwide. According to The Guardian, Nigerian tourists in the United Kingdom (UK) are the fourth biggest foreign spenders, with an average spend of four times as much as UK shoppers, amounting to about £500 ($710) in each shop.

“I have seen people spend anywhere from about $50,000 on bottles per night,” says Richards Nnadi, owner of Escape Nightclub in Lagos. And that is just the tip of the iceberg.

The impossibly trendy strip that is Adeola Odeku boasts a dazzling array of clubs. Escape was one of the first of many such upscale destinations offering music and food across three floors. And when you need to escape the dancing and music, head downstairs to EVE restaurant, operating from midnight until the crack of dawn.

Nnadi had been in the nightclub business for over 15 years managing and promoting several venues for clients before opening his own five years ago. Featuring an assortment of luxury vehicles, ranging from a Lamborghini Aventador to a Bentley Mulsanne, the parking lot of his club is akin to a luxury car showroom in London’s Hyde Park.

“I have been here long enough to see the transition that the nightlife scene has undergone. The nightclubs in Lagos previously consisted of people putting up small buildings. So Escape was the first operative nightclub on the island. We believed that there was so much growth coming in terms of expansion and people wanted to have bigger venues with more headroom to experience a proper nightclub scene,” says Nnadi.

After carving out a niche for years as a dominant player in Lagos’ pub world, there is now stiff competition from people who too share his vision for big spaces and unique experiences.

About 300 meters from Nnadi’s club, newly-opened Cubana is also vying for a piece of the action. The club is another upscale establishment attracting expatriates in the steamy metropolis. From the outside, unlike the shabbiness of most of the other buildings around, the club’s incandescent neon sign ‘The World is Yours’ illuminates the entire street, making it hard to miss in a market where customers are extremely fickle. The responsibility to grab the attention of these capricious customers lies with one of Nigeria’s leading communication companies, Robert Taylor.

“You must be very clear on your brand identity. What do you want your space to be known for? You should be able to tell the difference between your space and everywhere else. A majority of the Nigerian consumers have played in the nightlife space in different parts of the world, so you almost have to come in on an international scale in terms of quality,” says Bukky Karibi-Whyte, the founder of Robert Taylor.

Her firm has managed to position itself in the competitive lifestyle market representing some of the swankiest clubs in the city. Karibi-Whyte’s involvement in the Lagos nightclub scene was a natural evolution from managing luxury drink brands like Hennessy, Moët & Chandon, Belvedere, Veuve Cliquot and Dom Pérignon.

“With brands like these, you are always looking at activities where the brands are visible and that is usually in the night club or hotel space, and we kind of found ourselves in the night club space which gave us a lot of insight as to what our brands are doing and a lot of insight into what kind of consumers we have and what our competitors are doing. This has worked very well in managing those brands and managing other entities as well,” says Karibi-Whyte.

The after-work hours provide an important opportunity for networking.

And if you think opening a space with trendy furniture and music was all it took to gain access to this lucrative and unpredictable market, think again.

“People think nightlife is having people come and drink and go but there is so much more to it. There are a lot of emotions attached to nightlife between the business and consumers and that is what we put into consideration when we were building. So from the aesthetics and the feel and vibe and the energy are all things you need to consider,” says Nnadi.

“If you know Nigerians, we get extremely bored very easily. First of all the interior of the space is extremely important to me. How it looks, how it makes you feel, down to the colors they are playing on and how it affects the mood of the consumer.

“Customer service is extremely key and it has to be number one. Then you now have the content side of things, which is ‘do you have a great DJ?’ And what interesting thing is your space doing every month. Then you have things like the support of the drink brand the space is affiliated with.”

There is a constant reinvention of nightclub spaces, which is interesting for these drink brands. Brands are now finding new ways of reaching consumers in an increasingly fragmented market.

Festivals have become a key strategic consideration for these brands. Underpinning their success is the work of the DJ whose role is to provide the in-house content that turns a room into a melodic oasis.

The social media revolution spurred on largely by a mobile market of 142 million subscribers and a penetration rate of about 101% in Nigeria, has led to the perking up of Afrobeats, consequently leading to the proliferation of Nigerian artistes both locally and on a global scale. DJs play an important role in this movement due to their popularity in the nightclub scene and their ability to make stars overnight.

“If there is no DJ there is no night life and there is no music. You need a good DJ to have the right experience. DJs are the life of the party and that is really it. You can have a bar, waitresses and waiters, flashing lights and everything, but if there isn’t a DJ to control the mood of your customers and take them on a musical journey, it is not a party. You might as well sit at home and drink,” says Obinna Levi Ajuonuma Junior who goes by the moniker DJ Obi.

He has carved a niche as one of Lagos’ biggest and in-demand DJs. Recently, this reputation has earned him a Pepsi ambassadorship, amongst other accolades. DJ Obi however believes there is a lot more growth in the Nigerian pub scene in terms of creating an engaging user experience for clubbers.

“People don’t go out for the music, people go out because they may be bored at home and they do not want to use their generator or they just want to go out because everyone is going out. ‘Going out’ here is very pretentious and for a DJ, I am playing to create an experience for the people that are there, so there is a lot more that needs to be done,” says DJ Obi.

From rooftop venues such as the newly-refurbished Sky Lounge at Eko Hotels & Suites that have elevated the Lagos night to stratospheric heights, to the revelers who want to let off steam, one thing is for certain, Lagos never sleeps.