A BLACK WOMAN BERLINDA NIBO WAS VIOLENTLY ATTACKED DURING A PRO-TRUMP DEMONSTRATION IN DTLA. 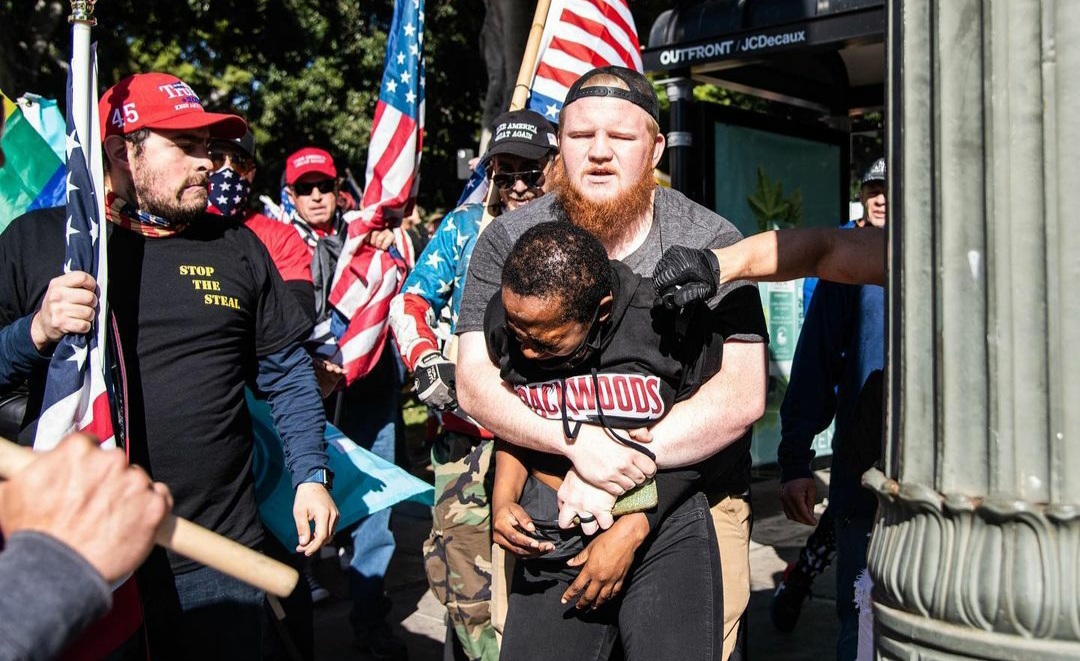 According to Bossips Berlinda Nibo, 25, was walking down the street in Los Angeles on Wednesday when she was attacked by Dorito devotees having a pro-Trump demonstration. Nibo told CBS Los Angeles that she was peacefully walking nearby when rancid racists began harassing her.

“I’m walking by and they’re yelling at me because of my color, calling me the N-word calling me the B-word, saying, ‘All lives matter, Black lives doesn’t matter,’” she said. “It’s a shame that I can’t walk down my street anymore.”

Several also reportedly told her to “take her mask off” and she refused and flipped them the bird. That’s when things turned violent.

“He goes and smacks me in the face,” Nibo said of one of the demonstrators. “And then all of them start trying to jump me, and then people jump in.”

“When they started pushing her around, this other woman that was a Trump supporter came up to her and ripped her wig off.” Natalicchio said. “Obviously, at that point, she began to try to defend herself.”

“People of color experience things like this on a daily basis and are seldom believed when they speak about it,” Natalicchio said.

She said that’s why she took the photos, and hopes that they not only give the woman a voice, but also provide proof that more must be done to send a stronger message against hate.

picture has gone viral of a man with his arms wrapped around the woman. Nibo intially told CBS Los Angeles that she believed the man was a good samaritan who was trying to protect her and move her away from the mob. The man reassured her that he had her back even as she was being violently assaulted.

Berlinda Nibo credits a man with a red beard for saving her life after she was attacked by Trump supporters in downtown L.A. "If not for him stepping in at that moment, these people would have literally tried to kill me," she says https://t.co/pH61XsSE8P

Here is a video of the entire incident in which Trump supporters and Proud Boys violently assaulted a Black woman at Wednesday's "Stop The Steal" rally in Los Angeles.

This video shows several new attackers, and also confirms that Roy Ball was not a bystander. He was involved. pic.twitter.com/F8mMTyJhpJ

LAPD is investigating the incident as a hate crime after initially only arresting six people for participating in the”unlawful assembly.” Anyone with information on these thugs is asked to contact Central Area detectives.